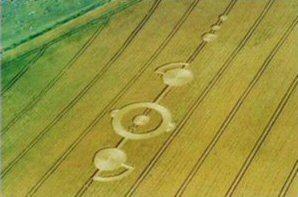 After Steve Alexander posts this old formation on Facebook, challenging peoples knowledge about the crop circle history, I go through my archive to find its location and date; Cheesefoot Head, July 13 1994. The morning after, I receive from my subconscious the date 1983. Of course, I dive into my archive again. The only crop circle dated 1983 that I can find turns out to be found again at Cheesefoot Head. 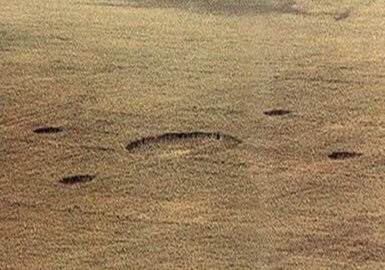 This 1983 formation is recorded to be a typical quintuplet formation. There have been multiple of this type through the years. As my subconscious thought it to be worthwhile to pay attention to it, I can only believe the two Cheesefoot Head formations relate to each other in more then their locality. After contemplating it occurs to me that the 1994 formation very probably explains something about the quintuplet. I was thinking, one quarter of the circumference of a circle already defines four quarters in a polar system. The four coordinates that are so characteristic for the quintuplet seem to have evolved logical from describing the quarter of the orbit around a centre. 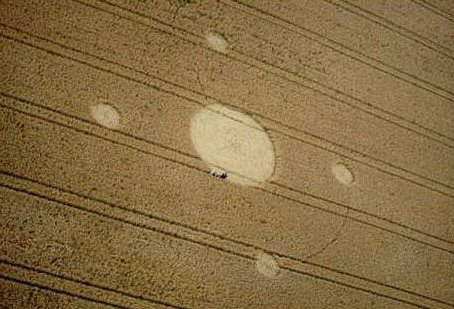 Another quintuplet. This one with a fine quarter of an orbit. Longstock near Andover, July 1985. © Colin Andrews.

So, the creation of the four coordinates seem to automatically result from moving only a quarter of a circle. This means the opposed coordinates are connected to each other as both outer poles on a stick. Also, that the centerpoint of the imaginary stick must be fixed. These are very simple and basic principles. Nevertheless, as it can be considered the invention of the wheel, we can also agree that these principles harvested an enormous impact on all we are familiar with.