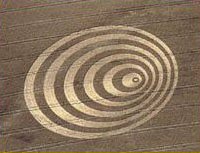 Near the ancient hill fort of Cissbury Rings and in close vicinity of Shoreham airport, this formation was found. Spanning 250 ft in diameter it was very large, probably the largest ever found until then. The concentric rings around the offset centre gave it some kind of illusional perspective.

It is one of those formations that can inspire to different interesting idea’s. In that respect it is mentioned to illustrate an extreme elliptical planetary configuration with a central sun. In case that’s really intended by the makers, one may understand it is a highly simplified depiction.

Another idea that’s projected onto the formation talks about a hovering Machine. (adeglasses.blogspot.nl) A mean of transport with the use of gravity repulsion. I can agree with some sort of gravity concept expressed here.

The third idea I find in fact most suitable. It tells us the formation to be an image explaining the Doppler effect. In physics the Doppler effect is best known as the effect of sound that seems to change in tone as it passes us. When it moves towards us, a stable continuing sound wave will sound higher then when it moves away from us. The Doppler effect is not only limited to sound waves. It involves in fact all sorts of waves, such as electromagnetic waves, gravity waves and even light waves. Personally, I like to think in this context about “creational” waves a lot, but hey, what else can you expect from a sex-lover?

The widely used GPS tracking system is an invention based on the Doppler effect.

What we might realize is that the crop formation, as so many other crop formations seem to do, point our attention to a very general or basic idea. The idea before the idea’s so to speak. For some reason it also reminds me to the Clifford’s Hill formation near Stanton St. Bernard of July 2001. 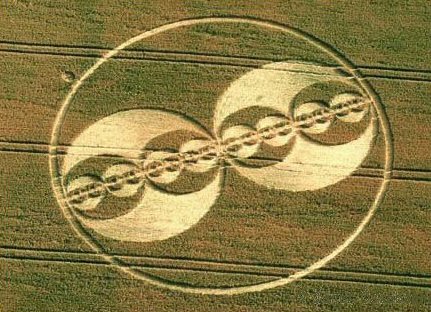 In this formation we can again detect a pattern of waves. Waves that vary in frequency. Could it be possible that we meet a different model of the electro-magnetic wave spectrum?

The electro-magnetic wave spectrum as usually depicted in traditional science.