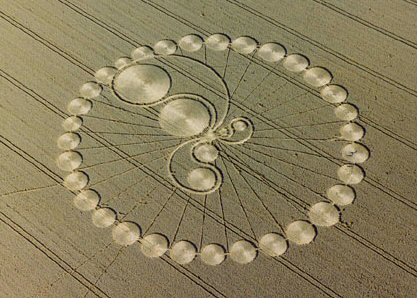 In order to understand this crop formation I first started to count these circles that form so nicely the outer ring. The outcome, number 32, didn’t immediately connect with me until I realised it is half of 64, a number that already for a long time speaks to me. From the centre off appear also 32 lines or radials. So, mentioning number 64 seems valid. It’s a remarkable number since both in the Tarot as in the I Tjing oracle it shows all the signs needed to refer to the wholeness of the universe. In one quick view it became clear to me that something about the Yin and Yang in relation to these 64 signs is expressed. 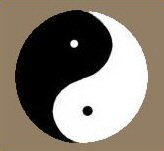 Yin and Yang are for the western mind difficult issues. Beside that the Yin Yang like figures are not confirmed to represent Yin and Yang indeed. Nevertheless, I hang on to the idea for now.

As shown here I simply project activity onto three of them because of the curves that suggest movement starting from the centre. The other three circles without surrounding curves represent passivity or susceptibility for me. Consequently we see 3 times the active Yang principle and 3 times the passive Yin principle. Because number 3 relates to growth or development and this idea gets confirmed by the expanding of the Yin and Yang, the pictogram seems to point out growth or development in the wheel of 64. Or backing down, the wheel of 32?

The number 32 seems to play a more important role to the eye than number 64 after all. Keeping in mind the Tarot system we can connect to 32 the Major Arcana plus the 10 Sephiroth of the Kabbala. This means we find 22 letters and 10 numbers. In other words, we find in this number the complete Kabbala matrix. Or from a slightly different angle, all the basic elements (letters and numbers) on which we have build our western culture.

While looking for some more clues I started collecting the qualities that belong to the numbers and the 22 letters of our ancient alphabet. I show you the 10 numbers and 22 letters with there meaning that together form 32 paths according to Eliphas Levi.

Now, if we put some attention on the perspective side of our figure then the priority of 32 above 64 becomes even more reasonable. The 32 radials can simply be seen as tracks along which the 32 spheres have gone. 32 spheres evolving from the one, the source, the centre. So, the Kabbala seems very probably thé instrument for explanation. In combination with the “Yin-Yang powers” that can also be found in the Kabbala as the pillars of severity and of mercy, we find even more perspective depth facing the Jang aspect also appearing from the centre. Closely related to the Jin it kind of whirls towards the edge of these 32 pearls.

While the 32 qualities as I prefer to call them, directly, as radiation appearing from the source, the Yin Yang powers do that according a curved track. It reminds me to Kundalini power. Therefore, besides Yin-Yang, pillars of severity and mercy, we can also connect with the channels of Ida and Pingala. The observer might find himself automatically placed in the Sushumna channel…(!)

Of course it would be interesting to put each quality or character to its corresponding place at the pictogram. Having come to this part of the research I wonder if someone has measured al the different sizes of the 32 circles. If so, I’ll be pleased to hear more information about it. However, placing the 32 qualities in their respective order is conform logics. At first I started to integrate the numbers as equal to the letters between them in such a way that for the eye the most regular distribution appears. The result is as follows:

As a column it looks pretty well done. To transform the column into a closed circle gives the problem of a missing number. Could it be “0” ? Anyway, the smallest of the 32 circles which is half overshadowed by the big Yang seemed to me a reasonable starting point because it is obviously the most striking one. After scratching on the block note the last quality turned out to be “integration” of course. It immediately became the key-factor to the whole. The row of qualities only needed to be transplaced one step because the very start was not initiated by this circle but by the first ray or radial. It also occurred to me that “integration” understood as connection could only be represented by this smallest circle if you look at the circles as a chain with this one as the lock.

Should we want to place a circle for the “missing” number “0”, or as you wish “33”, it should exactly be on the imaginary straight line that comes from the centre and crosses the hearts of the big Yin and Yang. This line can easily be taken for the line between ending and beginning. The integration, or maybe better unity, as a final quality has therefore possibly the smallest sphere because this one is as a final one not yet fully completed!

If we look more careful at the whole range of circles than we must admit that for example Ghimel is also pretty small. Or what to think of 3, of Theth and of 7? The exact diameters seem to play an important role. So again, if someone ever measured them please let me know.

Until here it seems to me that besides some kind of calendar setting (stages of the Yin Yang symbols) it also looks like there is a clear message to be understood. As if there is literally something told to us. Here lays a menu for the devoted Kabbalist. Although I believe different clues can be found, by lining out the centres of the Yin and Yang figures I make sentences as “Integration of virtues nearly reaches perfect balance.” Or “Start connecting the good, it brings balance.” 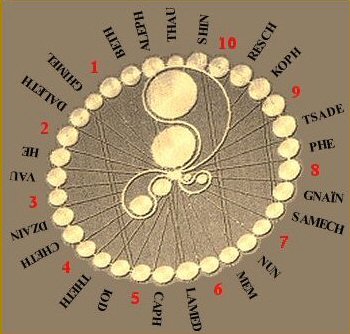 When I’m allowed to link this formation with the Waden Hill one that appeared a month earlier, than it becomes possible to formulate it as “integration is good for balance”, whereby thoughts seem to direct towards groups of people that are involved in the tendency of escalation fed by campaigns about terrorism. So, an appeal for concentrating on, or cultivating our positive nature. At least I feel encouraged. 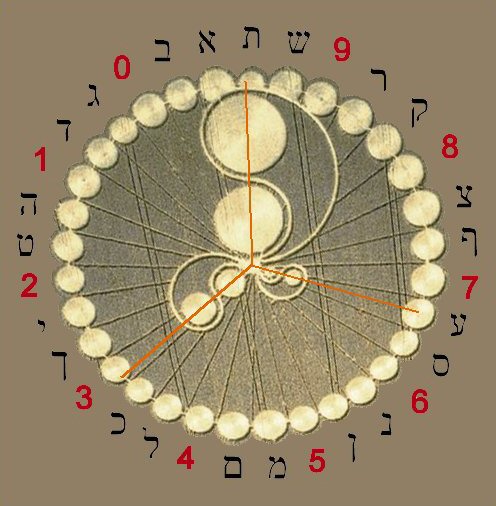 Upper version is done by concentrating on the source as much as possible. Taking 0 to 9 instead of 1 to 10 seems more appropriate in terms of logic. On the other hand, we are dealing with an old alphabet here while in a historical perspective it is good to keep in mind that 0 (zero) is only an invention of later date. So it is hard to tell which version makes more sense. Obviously it makes a big difference in reading this thing. In fact this 0 to 9 version tells me something like “Integration of endless intelligence leads to perfect balance”. Other translations based on symbology connected to the letters could be “The eye/the source is the sign of endless intelligence” or “The signs of endless intelligence lead to the eye, the source.” Sometimes I wonder if the circle makers have come to blow our brains…