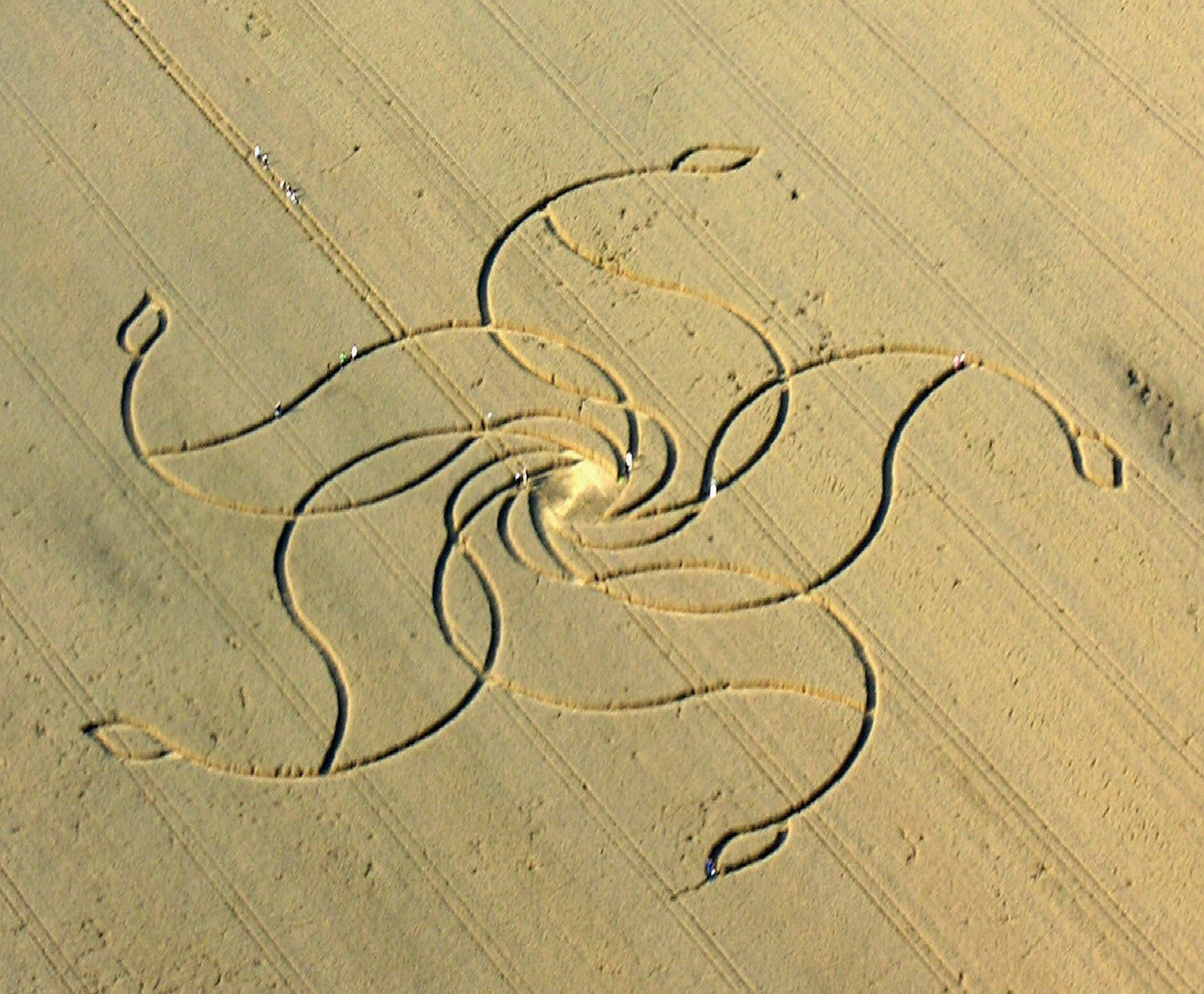 The formation is found next to the river Rhine at St Katharinental near Diessenhofen, Kanton Thurgau in Swiss.

Its first impression is of swing and/or elegance. A flower with five petals. The formation reminds me of Wiltshires Honeystreet formation of 2004. This Honeystreet formation most likely represents the power of forgiveness or pardon! It was through the works of Janosh that I came to know this. Once you let it sink in, you can find it really appropriate. The “Honeystreet petals” seem to really GIVE gifts in the form of a ball. It is as if the petals or waves unroll their gift. As if arms reach out and share. Also in terms of numbers and their meaning it corresponds, but I will keep that for another time. 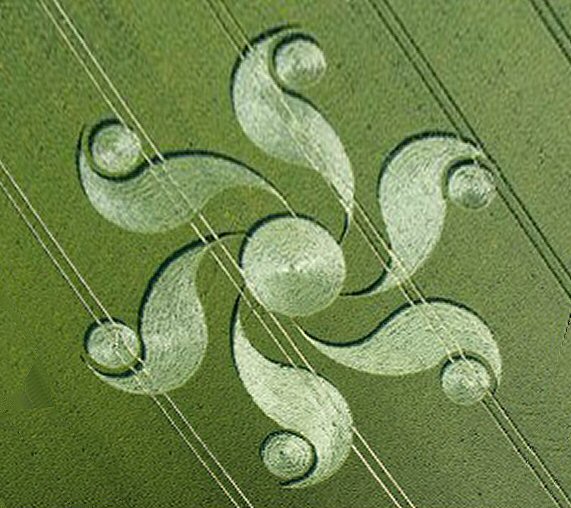 Unlike the Honeystreet formation, in the Swiss formation we find overlap on both sides of the petals. It is as if the floating lines hook on each other.

I imagine the Swiss St Katharinental formation represent something similar as the Honeystreet formation. Instead of unrolling a ball or disk, it seems to bring forward germs or the like. So, one can think of “germinal force” as its essential idea. 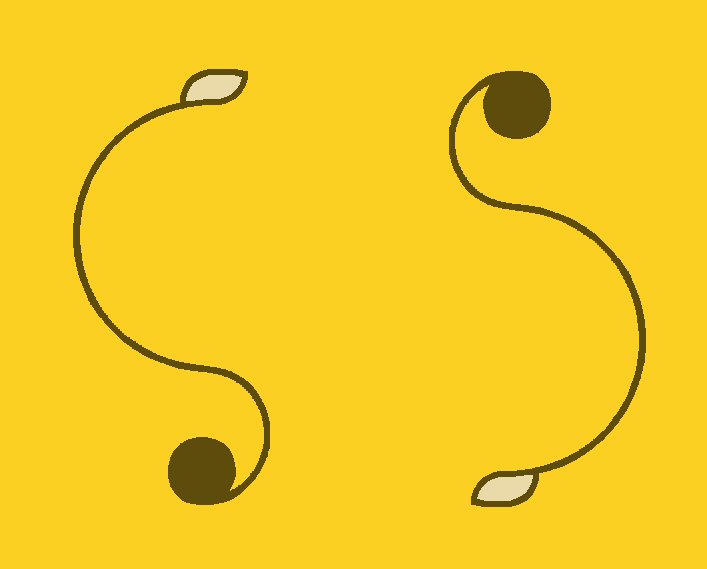 For interpretation of crop circles I am used to study the dates and the locations of their appearance. Concerning the location it turns out that since the Early Middle Ages the district Diessenhoven has been known as the granary of the Thurgau due to its extensive and productive grain fields. 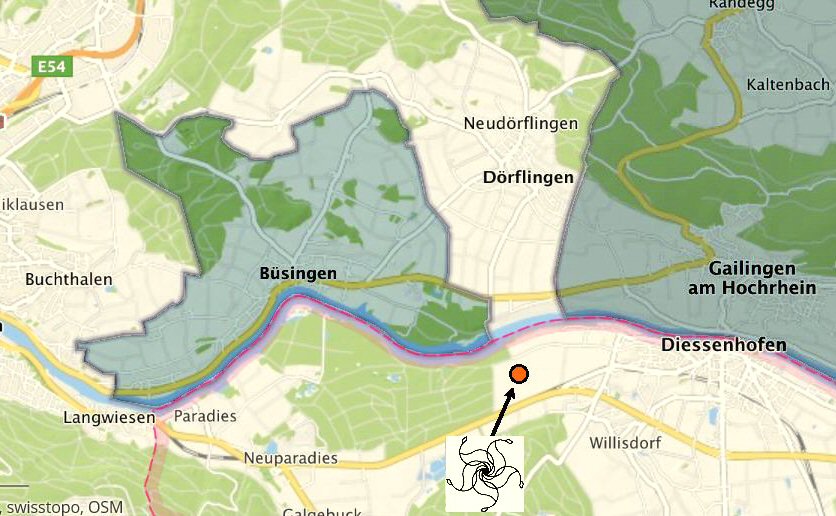 The darker zones represent Germany. The orange spot marks the exact position of the crop circle.

Another peculiarity about the location goes as followed. The term “germinal force” sounds almost like “German force”. Once looking on the map where the field is positioned, it turns out to be very close to, as strange as it may sound, two German borders… There turns out to be an isolated piece of Germany nearby. I never knew a separate piece of Germany existed.

Searching for the semantic origin of the name Germany or Germania, it appears hard to find, but I found two possibilities. One leads back to “German” meaning “spearman”. The second possibility relates to the Latin “Germanus” which means something like “own brother”, “like a brother” or “from a brother”.

In case the crop formation, by its position on the map, wants to suggest something in the direction of “brotherhood” I can easily agree noticing also how the petals gently hook on each other. The initial association with germs sprouting from one source or returning to one source seems to combine wonderfully well with the idea of brotherly unification.

Would one object that the English word “germ” probably doesn’t trace back to the same phonetic stem as “German” then that may be true, but in my humble opinion that doesn’t bother much. As far as I understand, there’s a morphogenetic field in which all thoughts form their associative shapes. Very often crop circles designs seem to directly spring from that field. 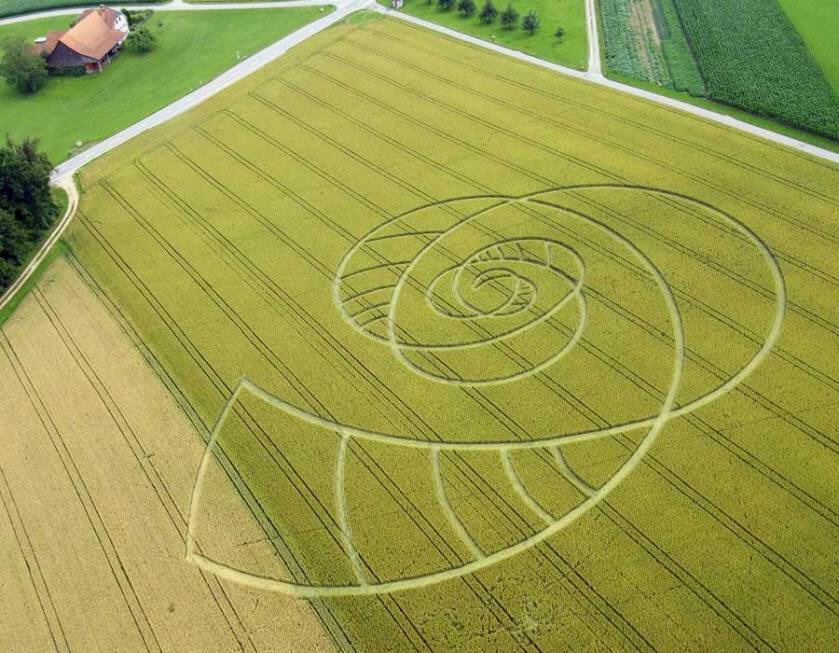 Talking about a (morpho)genetic field, another crop formation that cannot be left unnamed is one that appeared in the same Swiss kanton Thurgau a year later, 2009 7 12. It was found at Hörhausen and seems to relate a lot to the one at Diessenhofen. It can easily be associated with the double helix.