A particular sensational formation is “the jellyfish”. Although the image shows, as usual within the crop circle phenomenon, an abstract geometrical configuration, it is obvious enough that a jellyfish wants to be expressed. Actually, due to the lack of water in this crop field it looks to me more jolly than jelly, making it to a jolly fish so to speak.

When I read the reactions on crop circle connector that appeared immediately after its discovery I was surprised by the interesting astronomical and astrophysical idea’s that were found. It seemed to make sense indeed, but I was nevertheless left with the feeling there had to be more.

Reflecting on the astrophysical comparison with the earth magnetic field that looks more or less like a jellyfish, one could ask why the circle makers didn’t directly choose for the image of the magnetic field? Taking the tentacles in consideration it becomes obvious that the image really wants to get the idea of a jellyfish across. After all, no smooth magnetic contour-lines can be seen. It are the tentacles that do it. They are an exception on the geometry. 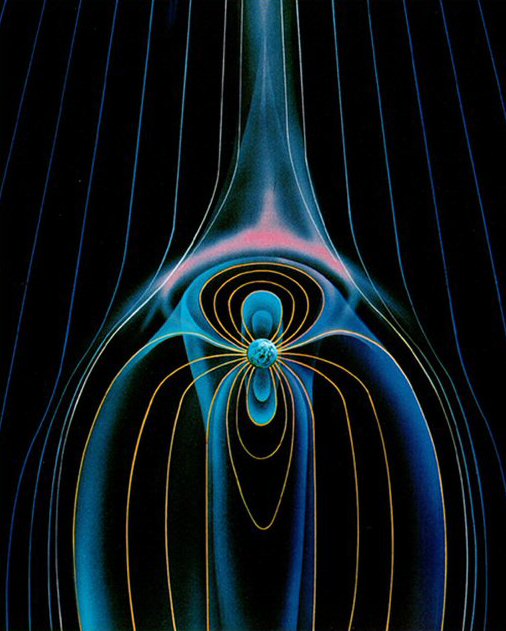 The earth magnetic field under the influence of solar wind. © K. Endo. 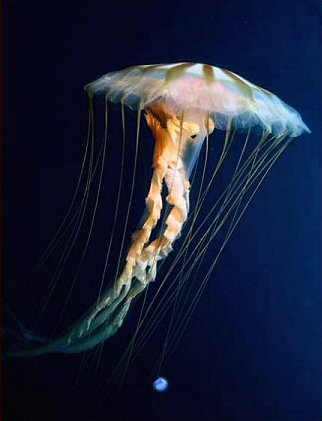 Apart from the typical tentacles you can also reason towards the other direction, meaning that there is not a real jellyfish expressed but one that is tending towards geometrical abstraction. Because of these geometrical shapes associations can be made with eclipses and meaningful numbers. So, it would also be discreditable to hold the formation for only a symbol. The different interpretations seem to have their value. 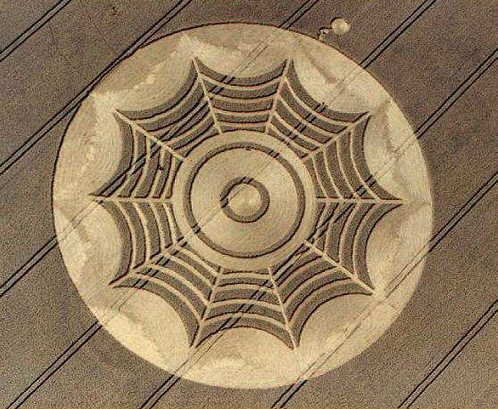 At the first viewing of this jellyfish formation it stroke me that I could find the Avebury spiders web from 1994 back into it. I’m still not sure if this is all real, because I had just started writing an article about this Avebury web a few days before which is a little weird anyway considered all the years that have past in the meantime. And than there appears this hat of the jellyfish, that dome, that funny umbrella of the same rare type of shape as the spiders web!    The Avebury spiders web combines to my opinion two essential idea’s. One is the concept of karma. The other is singularity. The reasons for that can be read in the Avebury essay that I was producing the few days prior to the jellyfish appearance. (still to be published, sorry!) Anyway, this corresponding element not only than inserts the idea of ‘karma’ to this analyses, it also adds the astrophysical idea of singularity to the other astrophysical idea’s that were already found.

Now, before getting lost in this umbrella aspect, I would like to come forward with the idea’s that stand for the jellyfish as a symbol. I haven’t read too much about the metaphysical interpretation yet while I feel I’m on top of a very inspiring bunch of information. So, it seems to me to let it all out.

Symbol for torment. As far as I’m concerned the jellyfish is about torment, vex. I think that the jellyfish as a symbol will become extra relevant in the time we are going through right now. As if we are to meet more and more jellyfishes on our transformation journey towards the near end of 2012. As if the jellyfish aspect in our existence has become activated and that we collectively have to learn to deal with it.

Confronting the momentary phase of global developments in which humanity finds itself, more and more irritations or situations of torment can easily appear. In practice it will most commonly be about learning to let go all sorts of attachments. These can vary from material possessions to claiming to be right.    On top of this there is a interesting phonetic resemblance between ‘jellyfish’ and both ‘jealousy’ and ‘selfish’. The combination of jealousy and selfish seems to make jellyfish (or jealousy fish as you wish). So from this angle it becomes clear that having to let go of attachments concerning close relationships can as well easily be the case.

So, we may learn to deal with selfish jealousy. Initially, it doesn’t matter to much if it is about hidden jealousy or recognised jealousy. But as soon as jealousy gets recognised than it becomes apparent that it needs the kind of treatment that gives it its proper place. Many people find jealousy or selfishness a negative thing and therefore an unwelcome something. So, they develop a tendency to push it beside or act as if it does not exist. Nature teaches us that such a tendency does not really work. In fact it often turns out to cause misery in the shape of disease or conflicts.

Is one able to acknowledge the selfish jealousy, than that will work out as an advance towards release. It makes us more honest with ourselves so that it becomes easier to direct the energy in a creative and positive way. 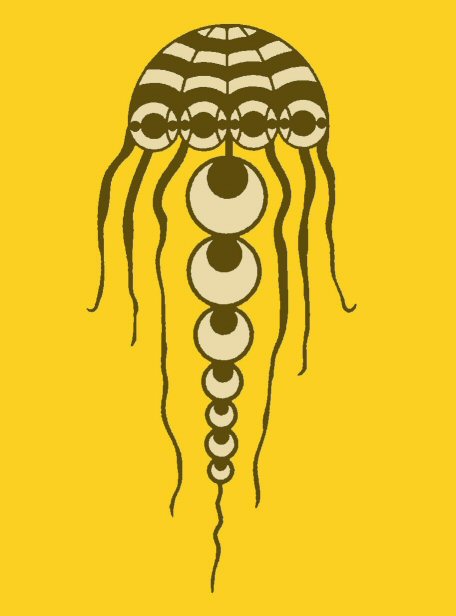 For many people, I presume it will be difficult to understand, but all the tormenting processes that we are all together going through contain very much steering from a higher level of existence. When you see it as a worldwide influence to self confrontation, than it will be easier for you to go through it. As a matter of fact, it is about safety and protection in the end.

Only by working on the cultivation of our character, our own personal one in the first place of course, we can hope that the world transforms to a place of real peace and safety. It makes no sense whatsoever to lean backwards in a passive way to wait for better times to come (or ufo’s to land and invite us to other planets or whatever). Waiting for a transformed world to come and take over as long as influences from outside are still able to trigger our peace of mind will turn out to be foolishness.    Transformation needs it that we ourselves face our situations and respond to them in the best way we can. In other words, it is not so much getting transformed as it is actively transforming ourselves by making the right decisions. If we come out of the processes in a damaged way or with a big smile depends totally on our selves. 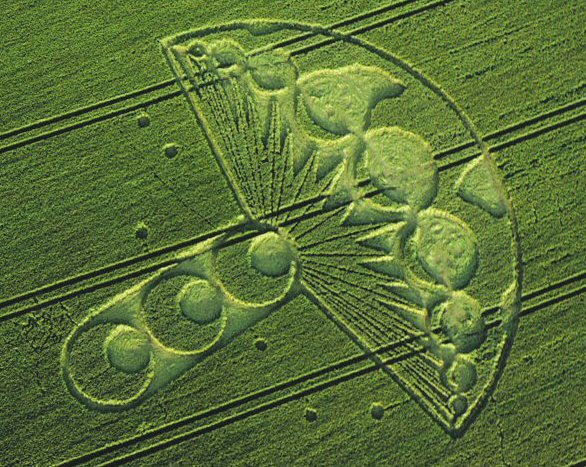 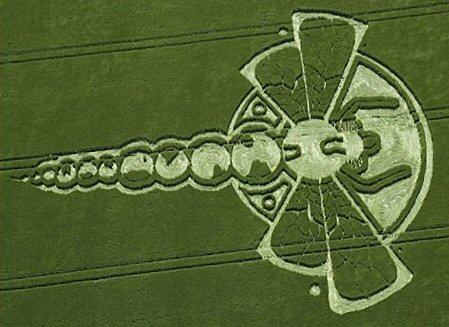 As a little extra, I add two pictures of formations that seem to be related to our jellyfish as if the same artist is behind it. I conclude so by the elements used to shape the images, the strong level of figurative expression and also the theme which seem to be “nature”. Another indication they have to do with each other is that the formations with their outstanding character appeared relatively soon after each other. Although images like these wouldn’t be unbecoming in a children book about fairy- tales, I have a strong feel about them that they are symbols that have to do with love and lust. As I have been analysing and working with dreams for many years, I can only be convinced about this.

So, may these formations inspire us to be natural, tender, and loving, in harmony with all that is…