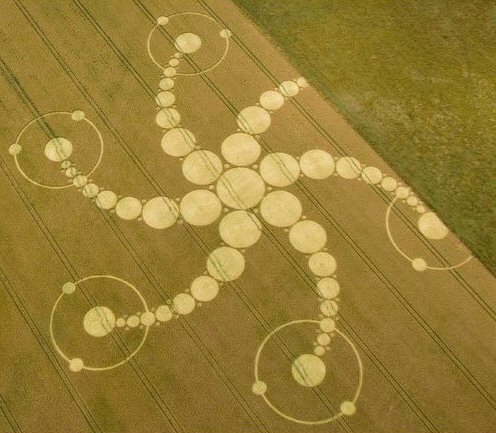 Every time I see this picture I immediately think of the formation as “the sweeping under the carpet” formation. It has clearly a sweeping suggestion to it.  Also, the neighbouring field gives an impression of a carpet. You can look at the design as if it continues underneath that neighbouring field. Of course the beautiful formation does not really continue. Therefore it could also stand for “assumption”. There’s only the suggestion of continuation. In case we accept the idea of something that is swept or brushed under the carpet, meaning some scandal gets covered, and combine this with the close related idea of assumption, then we have a lovely meal to ponder about. At first, one might say that the pattern as visible probably would continue had it not been covered up. Yet, one needs to also consider that if the pattern is so obvious, then what would be the deal to cover it at all? So, the next question could be is, how real is the beautiful pattern exposed to us? Aren’t we lead to believe something beautiful is happening?

Although I reflect some general thoughts about the “cleaning” activity or the assumptive mind, which is all fair enough to do, it is also striking that the formation was found at Martinsel Hill, where there has been a follow up of at least three crop formations that can be linked to the terrible oil pollution drama that took place in the Gulf of Mexico in 2010.  You can read all about these Gulf disaster related crop formations here.

Another 2009 formation at Martinsel Hill.

The formation shown above was also found at Martinsel Hill in the same season. It encircles a polluted pond, telling us about water pollution.