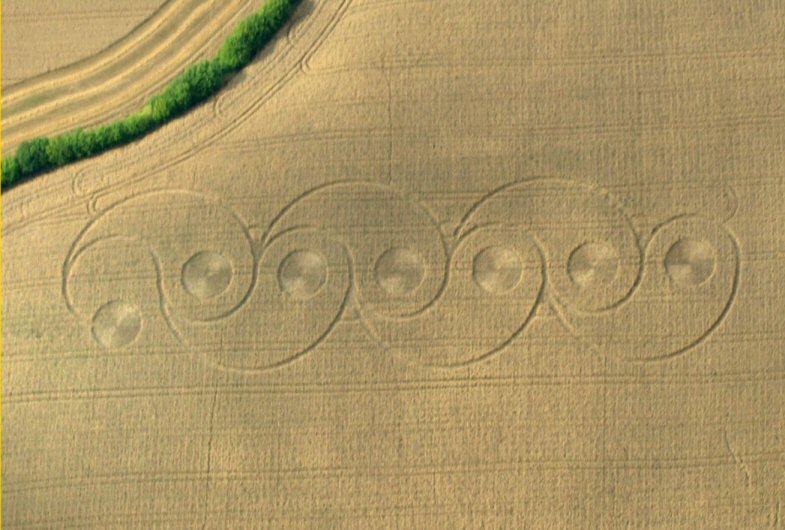 Intrigued as I was by this chakra system-like design I went all the way to North Yorkshire. The season had almost gone, so I risked the disappointment of seeing nothing but remains. I was lucky, the formation still existed in all its splendour! 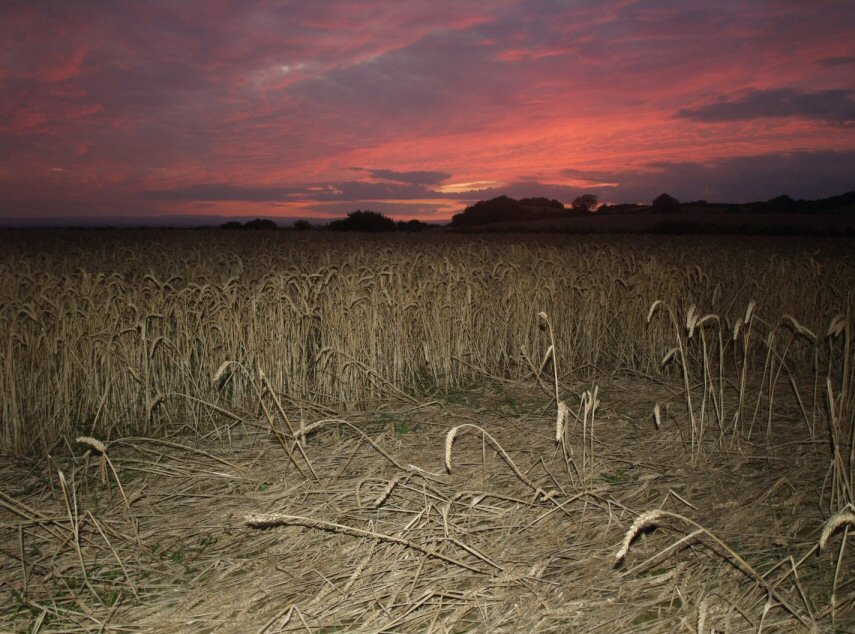 And what a sunset!

In spite of the late hour I couldn’t resist to jump into the field. Although the formation had already been there for about seven weeks, it still was in a pretty good condition. The angry farmer and the difficulty to reach it had probably saved it from massive extra flattening by the tourists of which there are very many in the direct area.

This beautiful area combined with the amazing sunset gave me a very magical experience. Hopefully I’m able to share part of it, using a little serie of pictures that I took while having the experience. 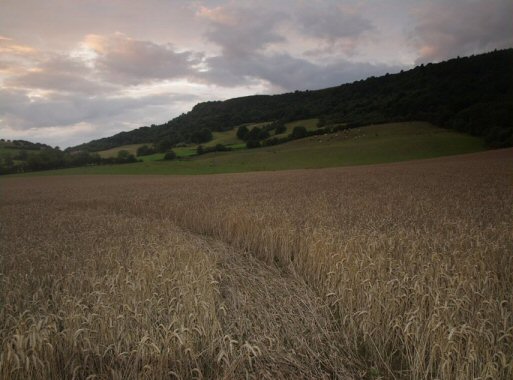 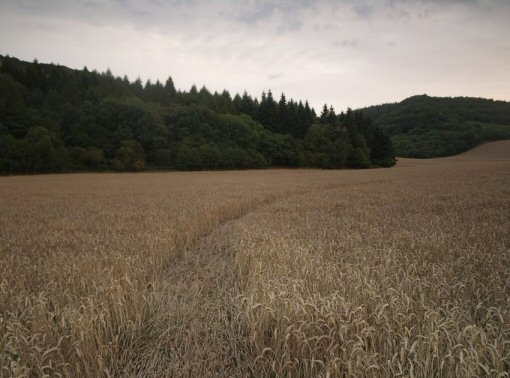 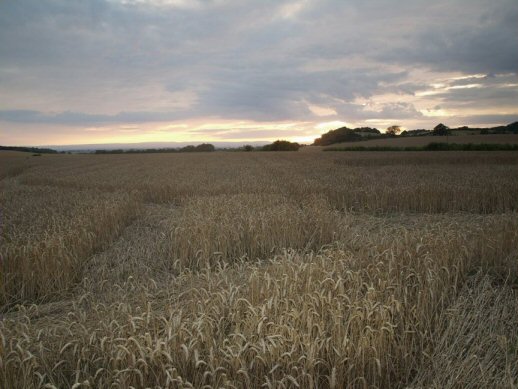 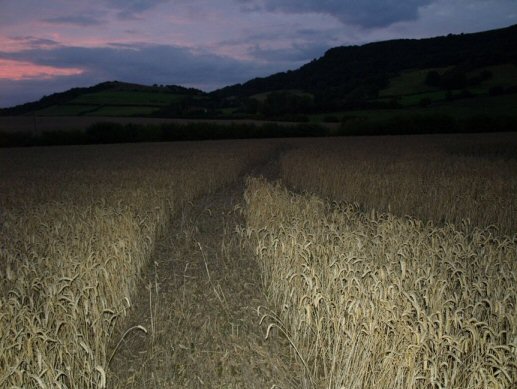 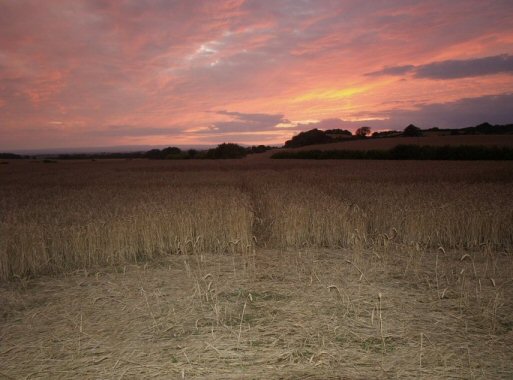 The formation was settled at the foot of a little airfield on top of the bank. It makes it possible to imagine there’s a relation between the design and the gliders activity. Using a bit of fantasy makes it as if something is said about wind turbulence, thermal dynamics or other sorts of air dynamics. 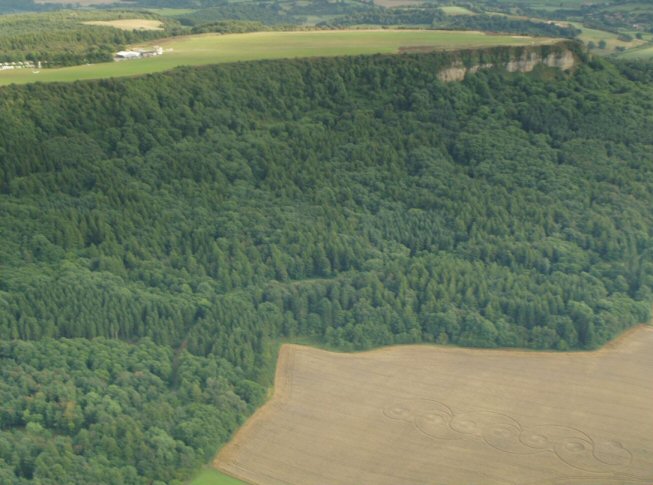 The formation at the foot of the gliders airport. 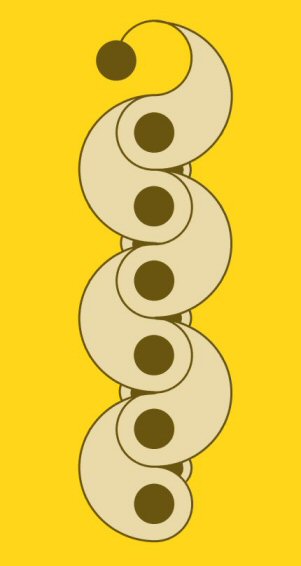 Diagram. (Maybe upside down, maybe not.)

Besides the associations with chakra’s and air dynamics there is yet another idea possible. It is also related to the area. The difference in height between the bank and the valley is at this particular place very extreme. The crop formation is seated exactly in the corner of very steeple hills. I tend to interpret the axis of the pictogram as a vertical something. What precisely is above or under is still hard to understand.

The difference in height of the earth surface as a relevant idea finds its support in an article by Matthew Lewin as can be read at cropcircleconnector.com (scroll down) or at 243 Sutton Bank North Yorkshire crop circle. This person is by the use of channelling in contact with cosmic beings that seem to be close connected with crop circle making. Whatever you may think about trance sessions or channelling, his website “the new golden era” is absolutely a remarkable and interesting source. I had discovered this website just before leaving to England this summer (2010) and I nearly got the feeling all my efforts had become meaningless while reading their stuff…

The article speaks about a phase of geophysical disruption that the world is about to go into. More specific earthquakes and volcanic outbursts as the result of the changing of the earth axis would await us.(…) This profound change would cause considerable alarm and will also remove certain accepted features of our modern society. The design of the Sutton Bank formation is said to try to communicate the need for balance and calm during this upheavals phase. Also, mankind will be more than capable of dealing with the consequences and outcomes of these phases of activity.

Until so far what the new-golden-era article is concerned. 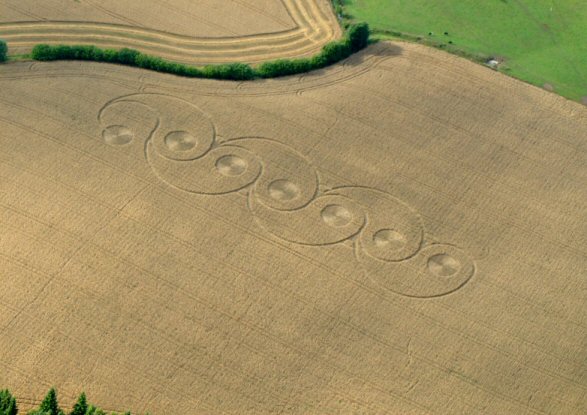 In case we try to consider the image disconnected from any association, we are able to see a central axis onto which six disks are placed in a regular sequence. Around these disks we see loops formed by big and small half circles. At one of the ends we notice a striking change in tendency. A seventh disk diverges from the pattern. Less striking, almost unsightly, are the little curves between the corners where the half circles meet.

The loops, that remind us easily to the Yin or Yang of the eastern symbol, give suggestion to the image of turning or whirling movement around the axis. Should we take a closer look to these loops than they seem to evolve from the combination of half circles and thereby it becomes questionable if the are much important as elements of the imagery. To illustrate what I mean, I present the lay directions and also diagrams that help you to different ways of looking at the picture. 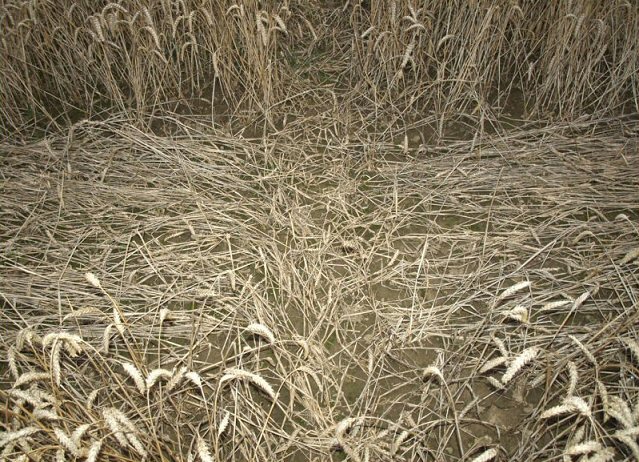 Separation in the lay, seen from the top (situated east). 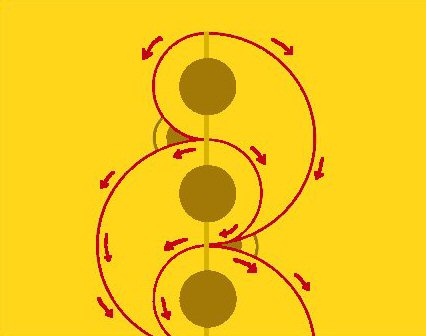 The lay direction of the lines go downwards from east to west. 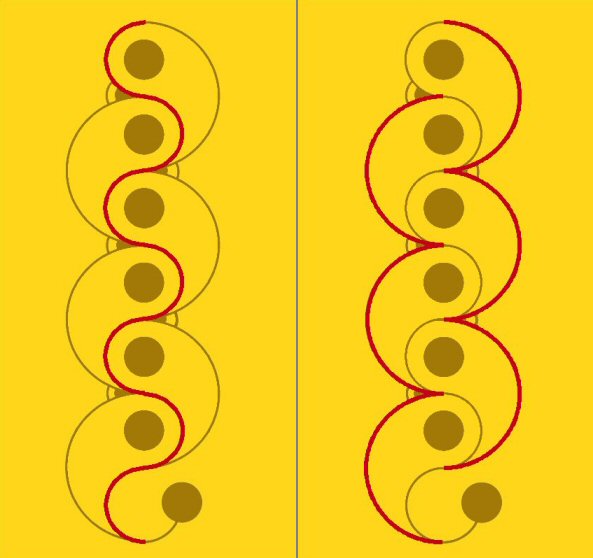 The last two diagrams are showing a structure that will be recognised by every dyed-in-the-wool croppy. Left we see a wave or waving line that is expressed in the most logical way. This type of curling lines appear to most of us as a two-dimensional thing. The diagram on the right shows a wave as well, but is constructed by two lines. This representation recalls a three-dimensional view to our perception. This wave looks like a wobbling snake or tube. It won’t be difficult to imagine that also the waving line of the diagram on the left carries a three-dimensional character. 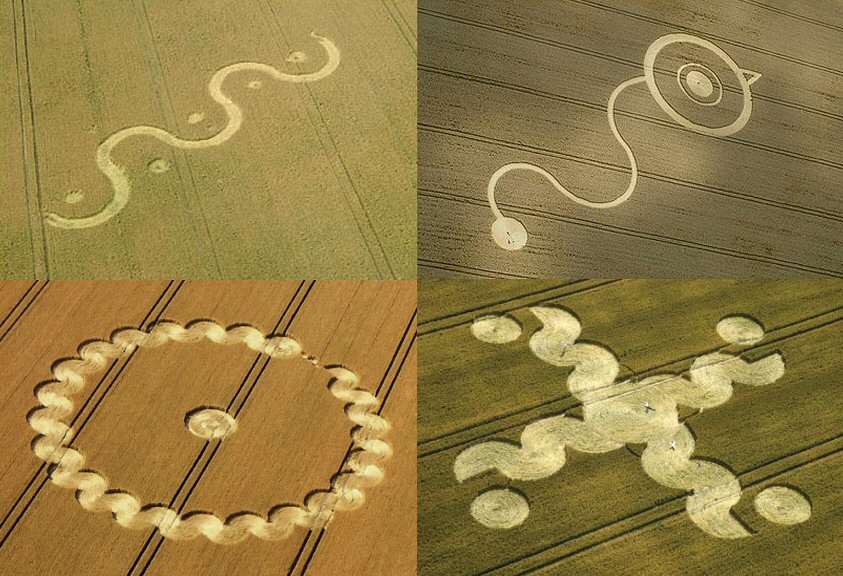 The Silbury Hill formation can simply be understood as the earth’s orbit around the sun in such a way that the turning around its own axis is also expressed or even the turning of the axis itself! This loop in time sometimes is symbolised by the Ourobouros, the snake that bites its own tail. This Ourobouros symbol implies actually much more than only the earth’s orbit. It stands for the cyclic earth of nature in general. However, this Silbury Hill formation supports the thought about movements of the earth as possibly meant by the Sutton Bank formation.

Of the Pewsey White Horse formation is said that it represents the Axis Mundi. The Axis Mundi represents the centre of the world. We see the rotation around the axis happening in the four directions of the world. Remarkable enough, two days after the appearance of this formation another formation appeared in the same field that depicts the human chakra system in a rather symbolic or at least geometrical way. It brings us back at the first association I connected to the Sutton Bank formation. Could it be that the circle makers are trying to tell us about a relationship between the human chakra system and certain rotations of the earth? When someone would like to bring his or hers chakra system into balance, he or she won’t be able to go around the need of proper grounding. That much is for sure. The possibilities of our energy body in which the chakra’s function as most important centres, are phenomenal and can lead us to manifestation of great efforts or take us to well hidden mystical places. 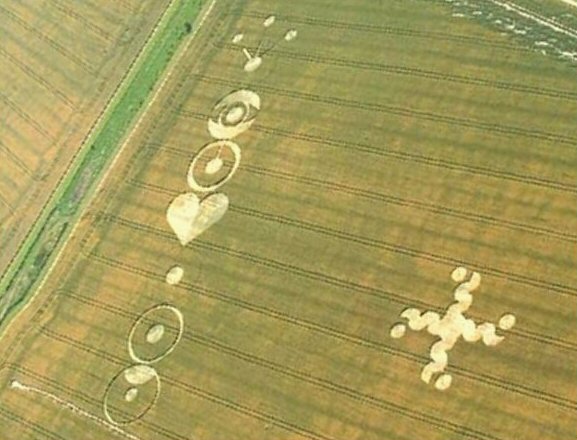 As far as the similarity is concerned between chakra’s, which actually mean “wheels”, and earth-cycles, “evolution” forms a core-issue. Does anyone work on his or hers personal evolution or character building, than he or she works automatically on the development of our world.

In case we bring back our attention to the inner waving line of the Sutton Bank pictogram, than we notice the outstanding aspect of the mainly regular pattern at one of the ends. The flowing line does not longer follow its way downwards. It also doesn’t stop at the bottom of the axis as you would expect. It seems to have chosen to climb back upwards. At the end of this erection we find a disk similar to the other six. As stated before, the lines suggest a three-dimensional perspective, so I propose to consider the disks as balls from now on. It is with this ball on the end of the meandering line as if it depicts the pace-maker of this line. The ball in the ballpoint that draws the line so to speak.

Should we want to continue the drawing than the most logical step would be to follow the curvature until a little circle is created.

As the diagram on the most right shows, an orderly continuation desires it that all half circles will be complemented towards whole circles. How things could evolve from there is shown by the next diagram: 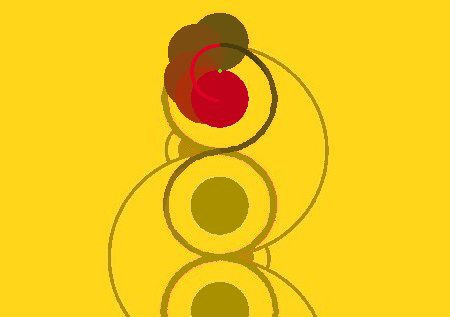 Diagram: Disk flipping around one of its poles.

If one studies this diagram carefully, he or she should be able to declare the elements we haven’t highlighted yet. We will understand that these strange little curvatures or small hidden disks in the corners are everything but whim. They express the ambivalence between core and circumference, saying that every circle, no matter its size, represents the centre point of a wider circle, and so on. It works of course in both directions, endlessly larger and endlessly smaller. The next formation shows the same principle in a more complete way. 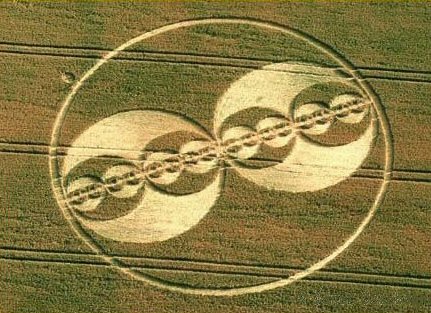 Now that our visitation in the kitchen of the crop circle brain is fulfilled, we can presumably agree that this design was everything except a whim. The deviation from the regular order seems to lead to a new phase of complementation. A universal design of balance in relation to the infinite is our outcome.

In case this design is still allowed to reflect this issue of geophysical disruption, than it certainly also does it about shift of consciousness. At least it helps me to insights about keeping my personal balance. Needless to say that such becomes very handy when the earth is indeed to shake to its foundations.

When we search for similar formations, we will find ourselves soon overwhelmed by the supply of smart variations. It feels to me as if, with these, it also does not only tell about the movements of the earth. 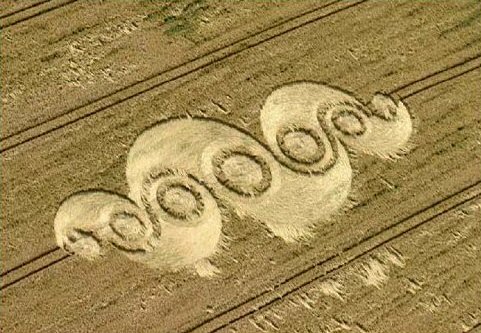 Like so often with the crop circle stuff, it tends toward universality. So, it does not directly point out specific issues, although these issues are not excluded either. Like the Zen-master used to say: “not this, not that, and as well this, as that”. In the mean time I have had indescribable psychedelic prospects again. I hope you had so too. 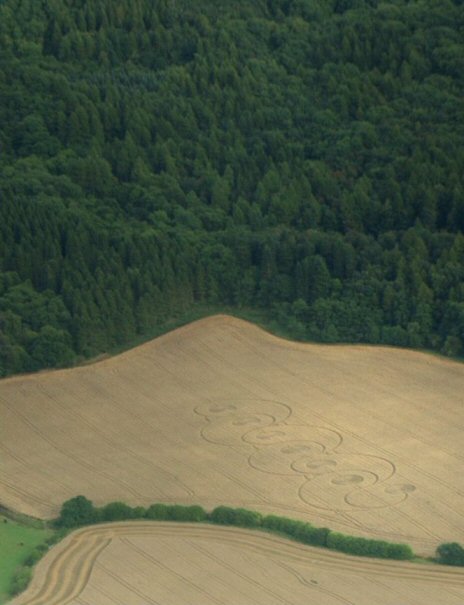