A very impressive formation appeared in the night of 28th to 29th of July 2011, at a country-seat that never before had been the location for a crop circle. I suppose that anyone agrees that the formation depicts a dragon or a snake.

At the evening of the 28th, I was performing a slide presentation at Alton Barnes about crop circles. I showed a few dragons while, in essence, I concentrated on talking about unity consciousness and how it relates to dualistic thinking. Unity consciousness versus duality seems also the central theme in the formation. The similarities plus the moment of appearing make it so, that I consider this formation as a personal connection with the anonymous crop circle source.

The dragon or snake takes of old, an important position in the collective unconscious of the human race, and as a result, also in the personal unconscious of each individual. Although, as a symbol it has multiple meanings, it can essentially be understood as the universal creative life power the way it manifests through nature. Therefore, one could call it; “God the Creator”, or at least its representative. This dragon snake is the serpent Ophis that seduced Eve to eat from the divine apple as how it is translated in the bible. It is also the serpent of healing, known from the Esculaepis emblem. As a duality it appears at the crosier of Hermes/Mercury. It is Quetzalcoatl the feathered snake from the Inca’s, Ningishzida at the ancient Sumerian culture, and so on.

At the presentation, I showed with the help of a few self produced childhood-drawings, my personal, connection with this being. I explained that it is very interesting to draw dragons, because, when our waking awareness doesn’t get the overhand, it will point out, which aspects are withholding us from our enlightenment!

Drawings from my childhood © Randell.

The illustrations show two children’s drawings I made. The drawing on the right is, according to me, close to enlightenment. It expresses an earthly dragon in serenity. It has taken the colour of the middle (yellow) while some sort of antenna sprouts out of its head. The antenna points to unity with the heavens. In case we should link this yellow dragon with the I Tjing oracle, than we find it matches a lot with the first moving line (the bottom-line) of “creativity”. It is the very first movement in the total of 384 possible type of changes that the book offers. It is worthwhile to connect the drawings as well as the formation itself with the I Tjing, but for the concise character of this article I won’t go into further detail about that.

As said before, the dragon/snake represents the universal creative life power that brings all possible shapes in nature to reality. For a human being, the personal connection with its own dragon nature is therefore of uppermost importance, far above all the other dragon activity in the surrounding world. In each of us, the dragon nature is potentially, or to a certain degree awakened, present. Although we are all, more or less, independent individuals, we are at the same time all connected with the source of constant renewal. The source of the so-often-itself-multiplying-force of life. 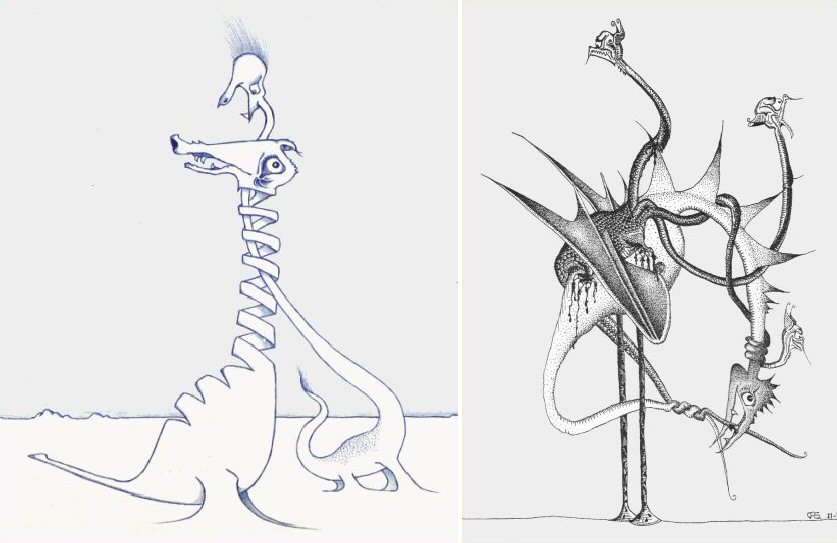 Drawings from my childhood © Randell.

To emphasize the idea of personal connection with the divine creative power, I have put it explicitly in my presentation and illustrated this with examples of my own personal existence. This personal connection is certainly not limited by only a number of drawings from my childhood. Until today it is in a prominent way with me in the form of many bizarre coincidences, channelled inspirations and other remarkable occurrences.

At the night of presentation, the West Wood Hay formation was being made. In the early morning 29th of July the impressive artwork would be discovered. Months later it was proven to be a hoax when a night vision video clip of the making was presented by Mathew Williams. Of course, the prick had, together with the circle team, his fun cheating so many people instead of revealing the truth at an early stage. Sure they can’t be bothered there are good willing people making serious efforts to research and study the real phenomenon for the benefit of human welfare. What a shame these sincere people are being mislead by the miserable’s that are damaging more than they are able to realise. 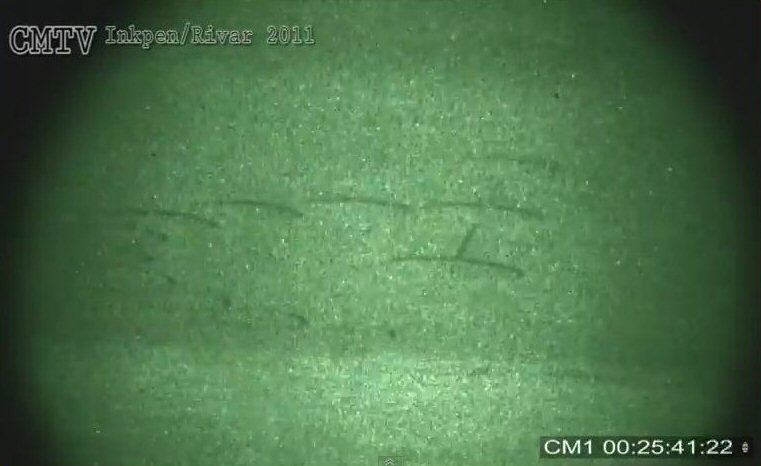 Anyway, that morning, as crop circle fanatics of the first hour, we rushed towards the place of “truth”. At arrival, the landowner was under no condition willing to listen to our thoughts about the phenomenon. He was behaving very angry about what he considered to be an ordinary case of vandalism. He was close to paintbrush our cars, as if we were responsible for what had happened to his crop. 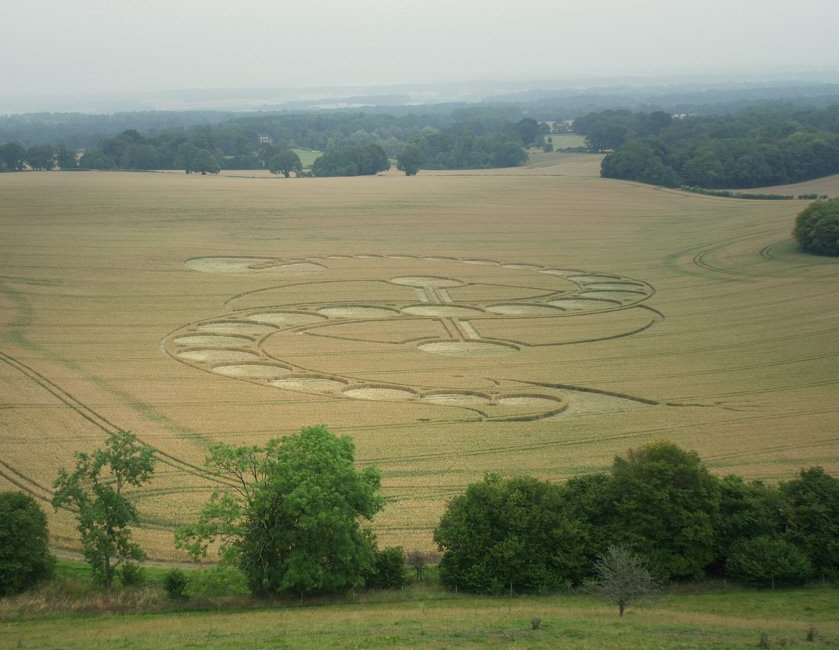 Short after having been able to take some pictures from a distance, a tractor appeared that would demolish the piece of art or vandalism or whatever it wants to be named. 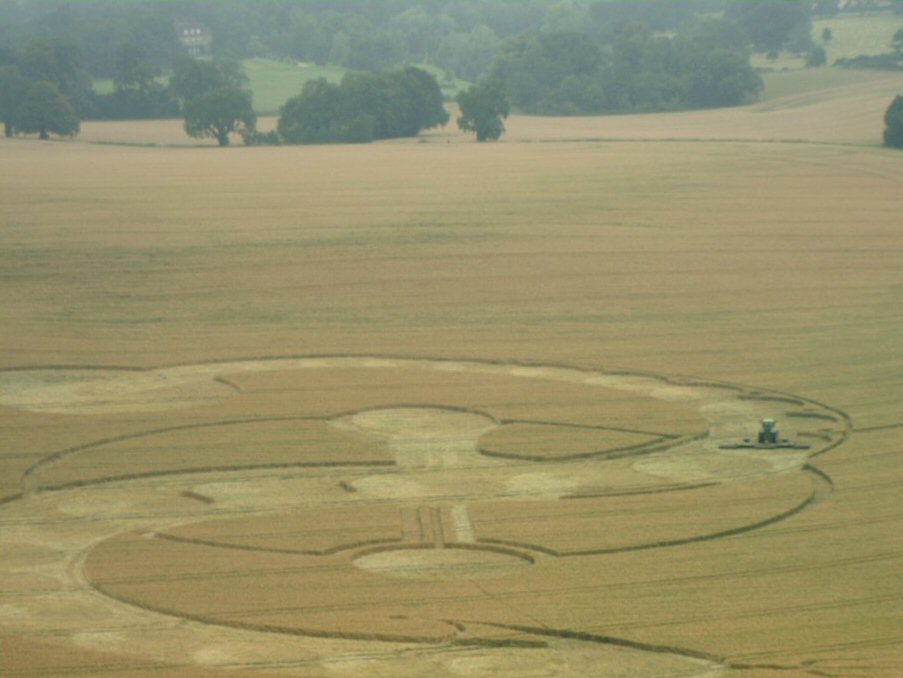 The tractor demolishing the piece. © Randell.

I would like to stand with a find that shows a remarkable similarity with the Inkpen crop circle pictogram. It concerns the sleeve of a rare occult book. I would love to sniff on this one, were it not, that I don’t have the essential information to search for it. The author, as well as the title, as the publisher, is unknown to me. The image is a still from a you tube video named: Occult Books ( a few of my rare editions.) 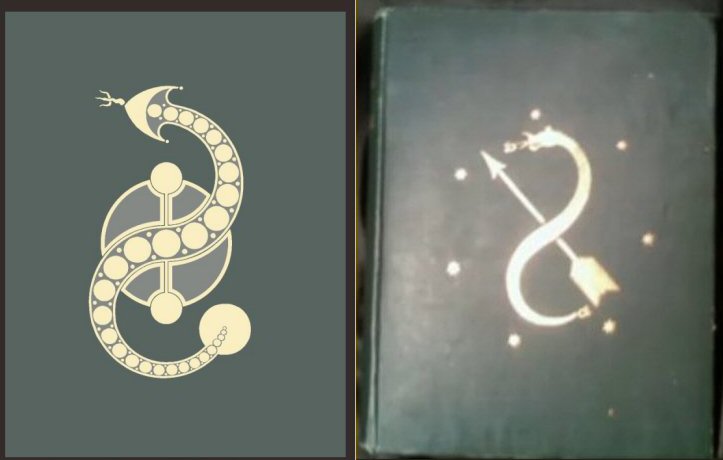 The golden picture at the sleeve of this book reminds me to the path of initiation, the path of the arrow. The idea reflects the quickened evolution that the disciple is able to choose. The snake then, stands for the normal gradual evolutionary track. The seven stars represent the traditional seven planets. That may seem an old fashioned concept, but in the world of magic still, and for good reasons, a very powerful given.

Cropcircleuniversity.com , the meaning of crop circles.