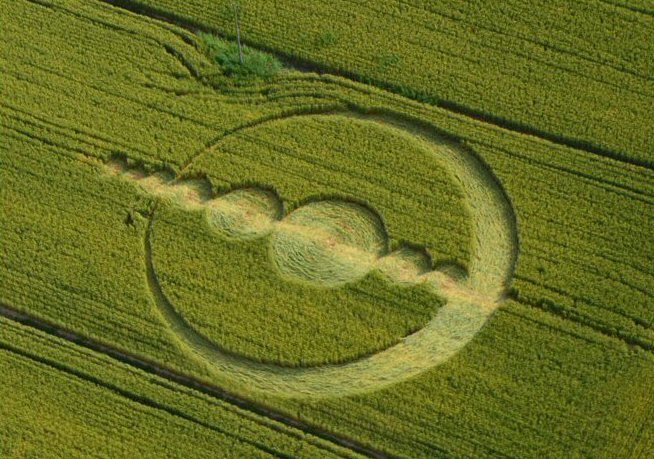 In the early morning of May 20th of 2012 an earthquake took place at Emilio Finale in Italy. About five people died and a lot of buildings collapsed of which some beautiful historical ones.

When a crop circle appears just one year later close to the destroyed town it is likely that it refers to the earthquake. The design shows multiple circles placed on what I would describe as a “fold line”. The line in the crop seems the result of lacking precision at seeding or planting the plants. Or maybe it occurred while spraying. 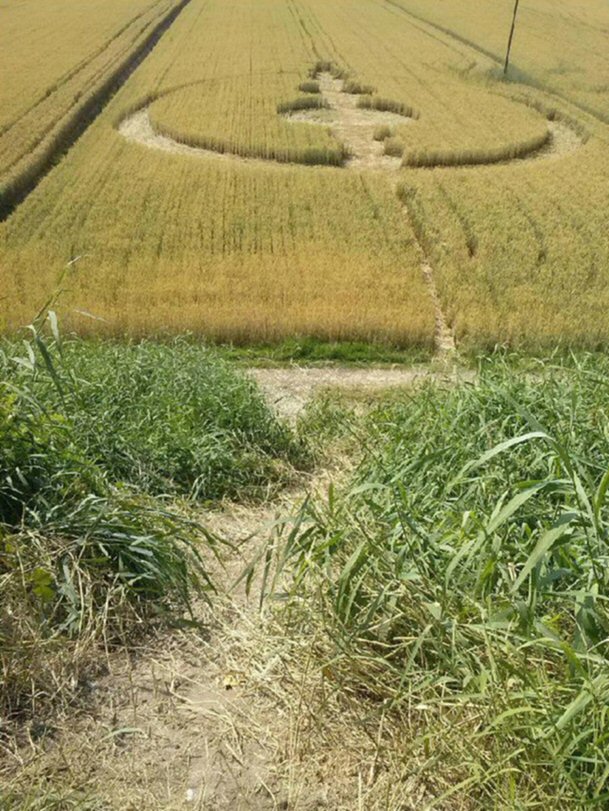 The line of circles seem to grow in volume and then fade away again. It is as if it emphasizes the fold line or the anomaly in the cultivation of the crop. There is also a wide circle or crescent for the largest part including the line of circles.

In the line of increasing and then fading circles I tend to see the earthquake itself. The vibrations in the earth, pre- and aftershocks. Maybe the crescent around the heaviest moments of the quake signifies the conscious experience or registration of it? Why it would be encircled by a crescent instead of a simple circle makes me speculate that also here there is an increase of realisation that takes place. 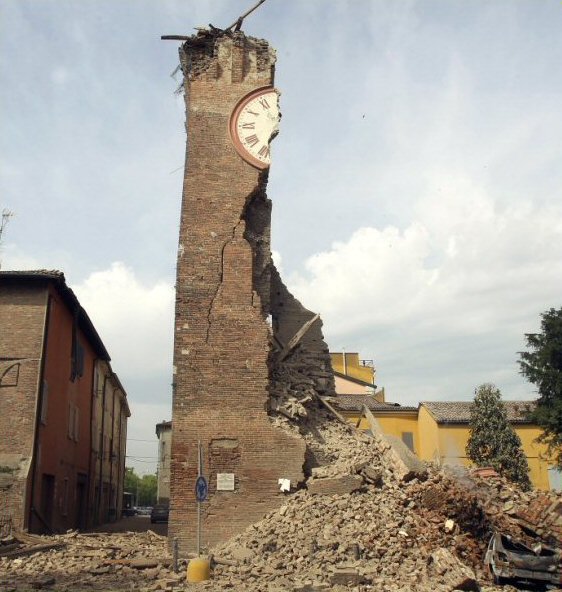 The picture of the tower with the clock that broke in half.

The design might somehow also refer to the famous picture of the tower with the clock that broke in half. One can easily say that the image has become the icon for Emilia Finales earthquake. A clock broken in half has of course a very dramatic feel to it, as it symbolises the end of time! Take in account that the earthquake took place in the year 2012, the year of the maya-profecy about the end of time and the picture functions as an even greater symbol than only for Emilia’s earthquake. Fate has it that a symbol for the end of time would occur at not only 2012, but also a place named “Finale”…

It is intriguing why the formation appears one year and a month and a week and a day after the earthquake. A lot of crop circle enthusiasts love to think that crop circles predict certain events. Here the formation seems like butter after the fish. So, it explicitly tells us about the situation after the event. The stage after the disaster. The stage after the end of time. In that sense it can be considered very positive, as it points towards a new situation. It is up to us how to respond to the new.