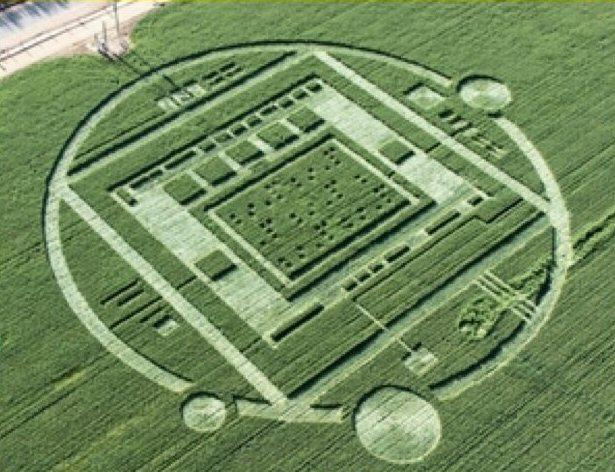 California residents have been left puzzled by a mysterious crop circle? The formation is related to, and most likely made by a group of hoaxers. For them it has functioned as a marketing stunt, presenting a new computer-chip. I think there’s something very sad to it cheating people on purpose. Here we see how an interesting paranormal phenomenon is misused for ordinary gain.

The following article I had written before the marketing stunt was revealed. Of course it gives a good impression how delicate interpretations can be without having all the background knowledge…

A few days after a new alarming steam cloud escapes the Fukushima nuclear power plant, this crop formation appears at a site almost the same latitude, but on the other side of the Pacific Ocean. As Fukushima was build for generating electricity, the crop formation happens to be straight at the end of an electricity line. Here we find access to the formation. 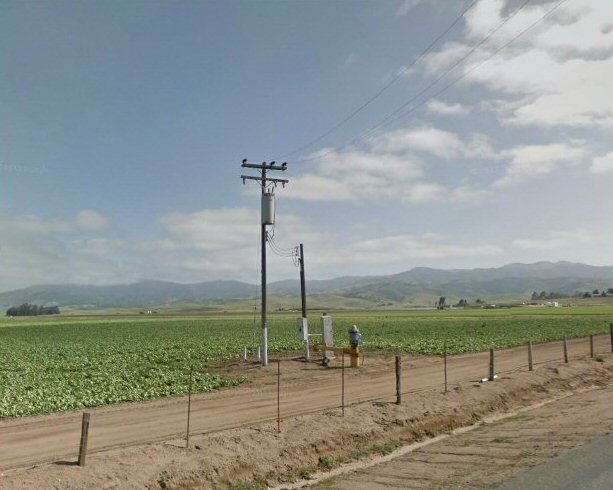 End of the electricity line.

Not much attention is paid to this radio-active cloud, or what it means, by the media, as most of the mainstream media is controlled by corporate elites. In case the media is not so much to blame, than Tepco (responsible electricity company) and involved governments (Japan and USA) are, by withholding crucial information about the disaster. In other words, California residents have been left blind on purpose for issues of great concern! Most remarkable is the fact that Braille-writing is central, thus essential, to the formation. What does the message for the blind tell us?

The Braille script reads in a repetitive sequence “192”.

A quick search for 192 related information leads me to a USA navigation satellite (USA-192) which forms part of the Global Positioning System.    The number further leads me to element Iridium 192. Also, I would associate it with article 1, section 9 of the US constitution, more specific to the second (=2) attached question, which seems question 22 for the whole article. It asks: “what is habeas corpus?” Answer 1: “Habeas corpus is a pretty tricky legal concept. Its most common practical effect in U.S. law is that no person can be jailed without being charged with a crime.”

When take a look at other aspects of crop circle design, a disturbing plume starting from the centre of the top section shows drifting away out of the circle. This, to me, is able to indicate Fukushima’s radioactive cloud escaping from sight or focus. Three straight lines seem to cross the steam cloud. That might indicate three days to reach North America. Or does it refer to the three lines of hypnotic suggestion for the blind to agree with the “authorities” to overrule their rights with some more martial law? 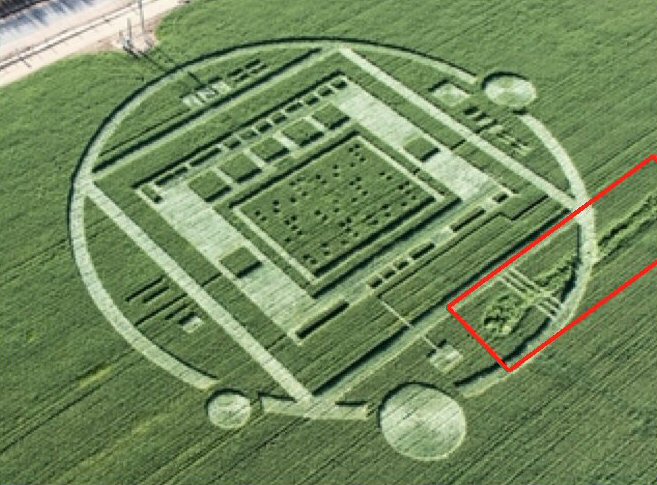 The Fukushima power plant is located at 37.42 latitude. The Salinas Chualar crop formation is at 36.58 latitude. Although the lengths do not correspond fully, we may wonder how much that matters in terms of a nuclear steam cloud drifting over the Pacific Ocean. It is near.

In case the number 192 refers to the navigation satellite, it sort of confirms the idea that the U.S. residents are kept blind, no matter the taxes they pay for such advanced tracking equipment. Not to mention they are tracked in all sorts of ways, if they asked for it or not. I hope it is understood that one interpretation of the number does not exclude another. Also, the total design of the formation could represent a GPS system of some kind.

The Ring around the device however, could maybe refer to a calendar. If that’s the case, I show a possible option here. After having been informed the formation depicts a computer chip, this calendar option seems, of course, total nonsense. At best, it proofs how easy it is to project calendars onto any circular shape. 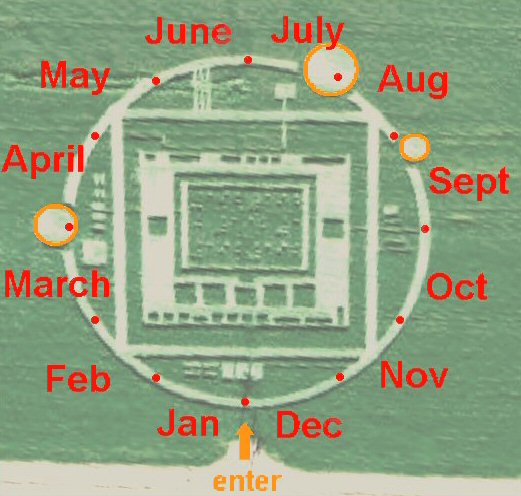 Initially, the Chualar motive (chew alarm motive?) seemed a profound warning to me. In a way, maybe it still does, even it turned out a blatant hoax. For me, it is the circumstances that may add different idea’s to what the design is intended for.