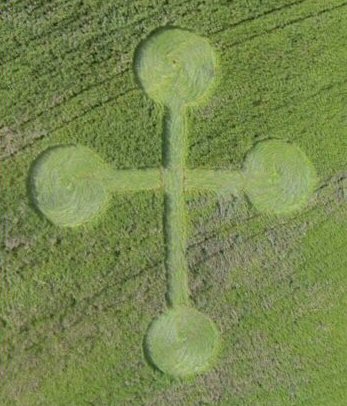 As soon as Robbert van den Broeke reported this formation I decided to go and see it the following day. On his website Robbert stated that observing the picture of the formation would already be enough to get a sort of initiation from it. That, I presumed, could never be as powerful as visiting the actual physical formation. Now, that turned out to be a mistake as that night (so, before my visit) I received a lot of powerful information close related to the “cross of grass”. 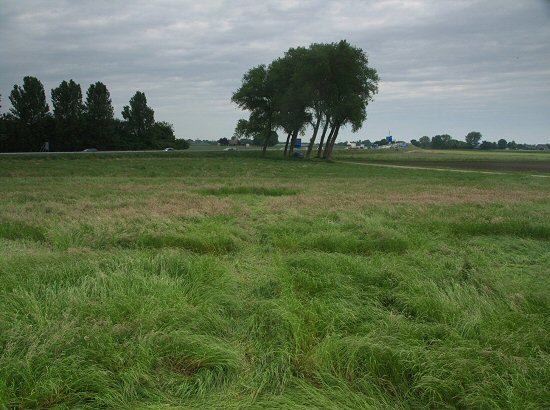 One of the best parts of the initiation was that I heard a heavenly choir singing simply two different chords succeeding each other. It felt so incredibly deep that I imagined to be in deep space. The last chord had a bell sound added to it. Amazingly and unearthly beautiful…    At the description of the formation that came before this one, Robbert also mentioned he heard something like a choir of angels related to a grand eternal celebration of collective consciousness in our milky way. 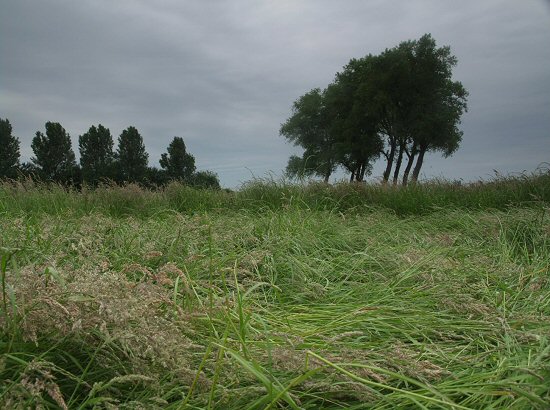 Another strong moment I experienced was that I found myself in a room with other people. Robbert van den Broeke was sitting there while doing some kind of healing or guidance to a ghost of a person that had died. I could see that ghost as Robbert was working with his hands on it. I saw its colours yellowish and green. I mentioned it loud and clear. From Robbert came a continuing flow of white light. When he was finished with the ghost, he stood up and while passing me in the room he put his hand on my back at my right shoulder. I would describe his touch as one of quality and precision. 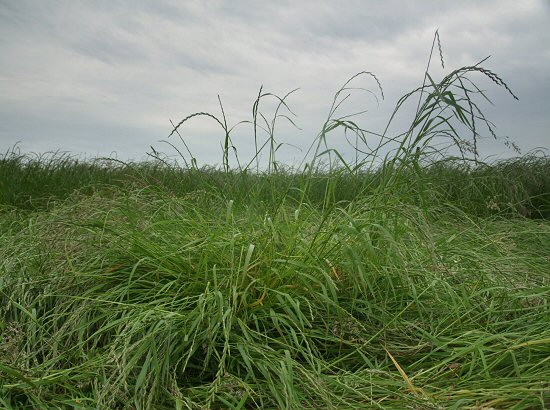 The formation showed beautiful little fountains of grass at the centers of the circles.

A third part of my nightly adventures contained a beautiful vision or dream in which I visited a big steady windmill. I was at one of those typical locations that can be described as belonging to the higher self. Like being at the transcendental plane of existence. At a certain distance in an overall green landscape there were wagons with hay that I felt were from soul mates of me. I was trying to move them towards my direction at the foot of the windmill, but that didn’t work out. Really stunning was the moment that I felt a heavy punch in my stomach that put me straight back in my physical body here on earth. A punch like that is known as an effect of teleportation trough time travel. It seems to me that time travel, whatever kind of methodology is used, is a reoccurring theme in the crop circle phenomenon. It may be illustrative to tell that still the same night, I had a dream in which I saw another crop formation. It felt as if I was looking at a moment in the future. The formation represented the seed of life and had two additions to it in symmetrical order. Indeed, the next formation that appeared was in Italy and had the shape of a seed of life… Only the two additions were missing. I believe that has to do with the angle from which I observed. 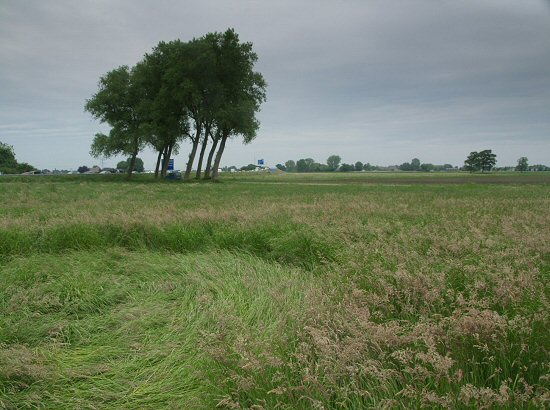 About the grass formation I can tell it relates to the appearance of a crossing nearby, that isn’t an actual crossing, but has the appeal of it. The highway runs through it as can be observed at the following picture made by Yvonne. It seems to me that the secondary roads on both sides of the highway must have ever been connected to each other as one road, before the highway was there. The symbology of that as well as the cross formation speaks of stagnation. The I Tjing spoke about the ending of a long period of stagnation. 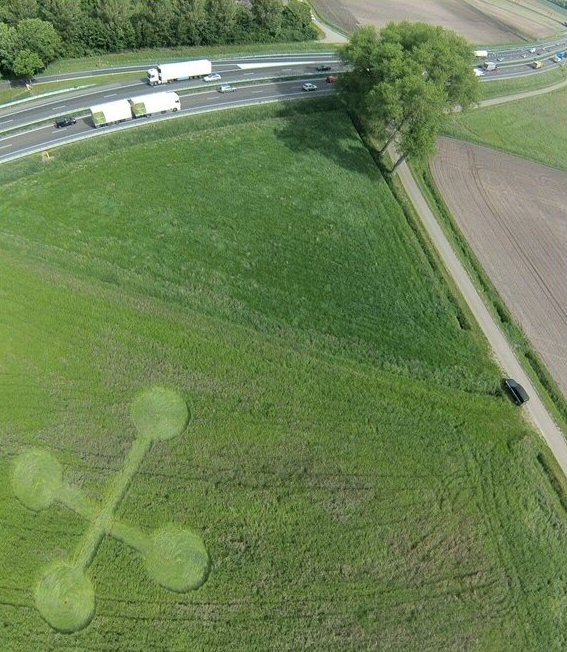 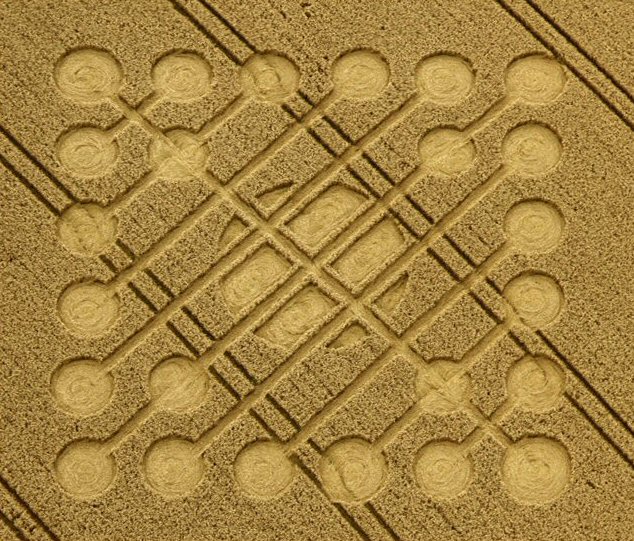 When arrived at the actual site, the formation seemed already quite damaged due to bad weather conditions. The amount of energy present was, however, very impressive! Although I don’t consider myself very sensitive to it, I sooner than ever before noticed it flowing through my constitution. 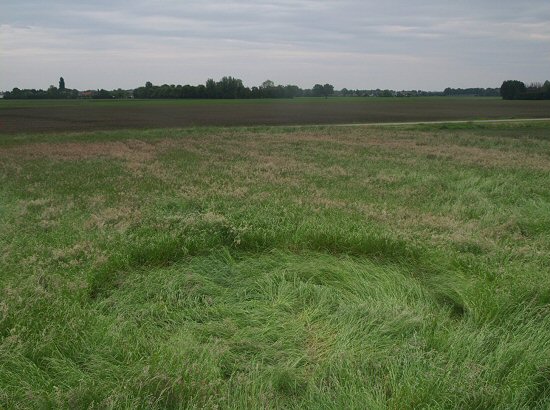 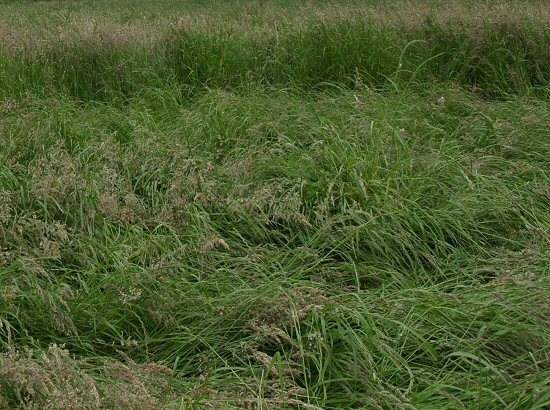 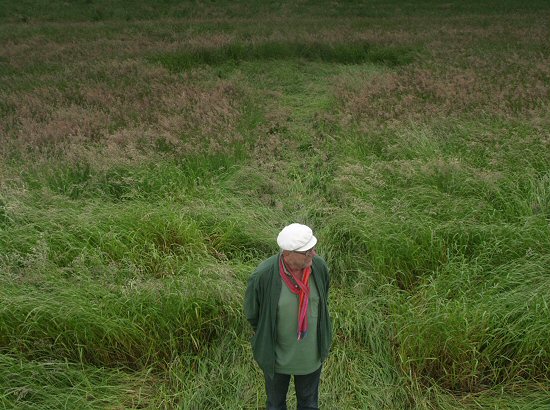 I was there with Frits Sondenberg (under the white cap) who has recently made a most impressive serie of reliefs based on crop circle geometry. 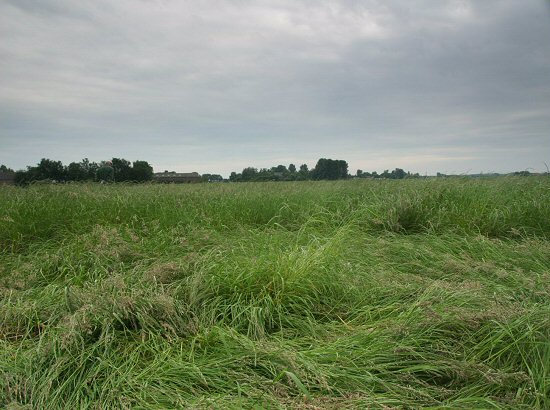 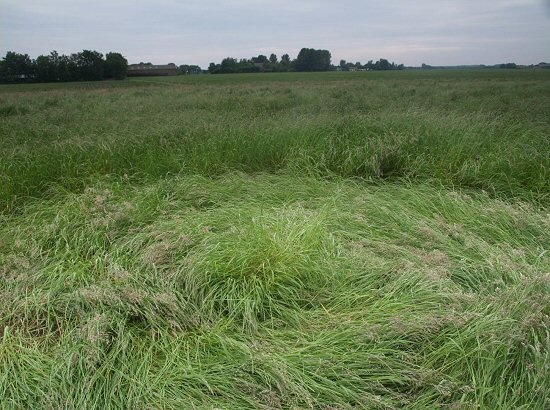 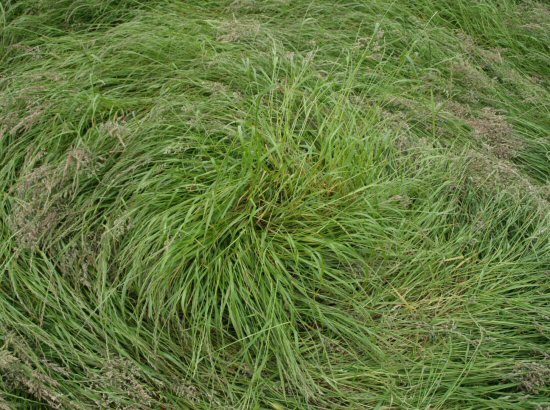 Centre of the four circles. 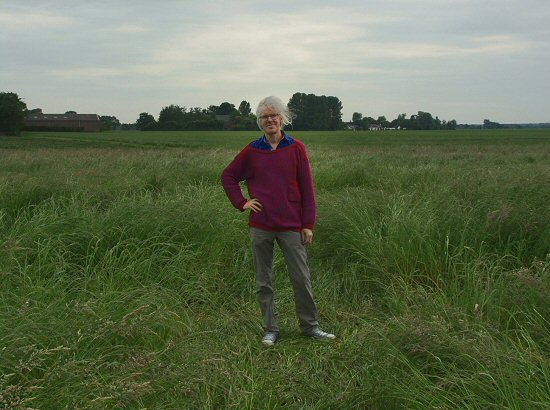 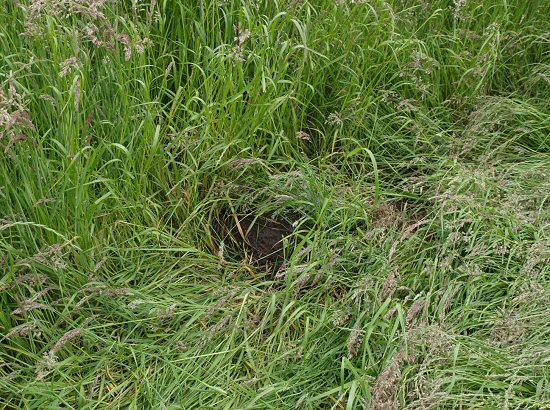 A lump of ground I found on the edge, but in the formation yet. 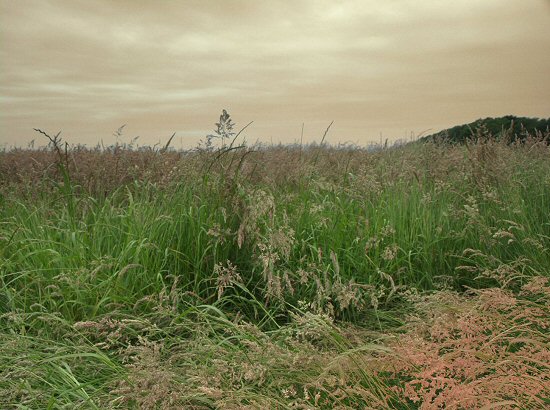 Sometimes I just love to manipulate the colours of the picture.