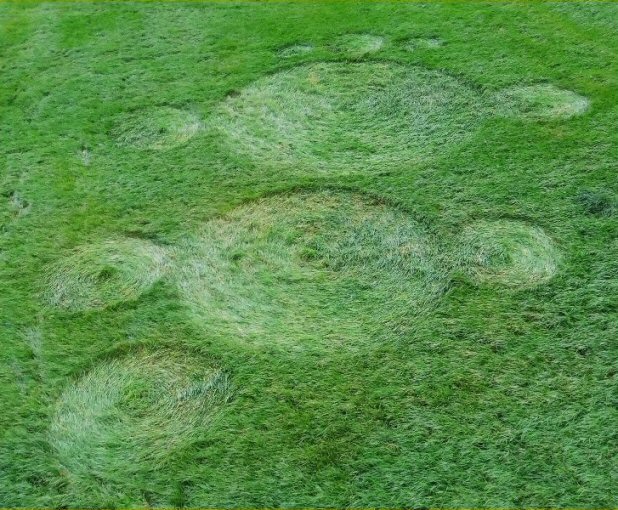 It is not unusual that a certain chain of events lead to the manifestation of a wonderful new crop formation. I am talking about events that are related to crop circles or strange phenomena that somehow link with them. Let me explain.

It started on the fourth of November when Charles Mallet of the Silent Circle (website and crop circle information centre) posted an article about an encounter of a cyclist named Mike Booth who saw three strange hovering objects at Boreham Down in 2005. 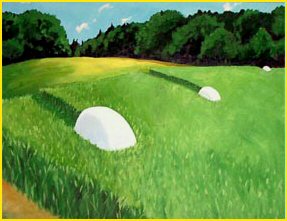 Painting of the hovering objects and picture of one of the tracks.
Both made by the witness Mike Booth. 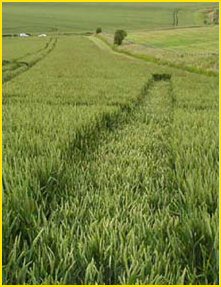 Empty track at Boreham Down.

Although I had read the story a few times before, it must be said, it is a very strong and fascinating case, definitely worth reposting now and than.

The day after the strange event, a very impressive crop formation was discovered in the same field where the objects had been hovering, and as it seems, had also been bending some tracks of wheat. The crop formation I have been studying before. I came to the conclusion it has everything to do with ignorance and the danger of heavy trauma. 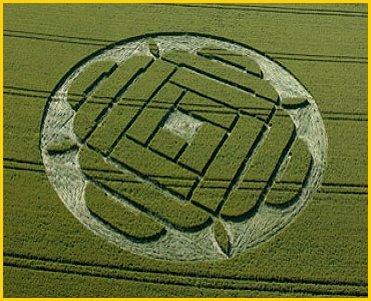 It was only after Charles had posted the article, that I started to discover that there was, as one might suspect, indeed a direct relationship between the strange encounter and the crop formation so near these tracks. It was because of the communication on FaceBook about these events, that my mind started to re-open or re-investigate it all.

From my subconscious I received information that made it clear to me that the strange hovering objects could represent coffins, as if a funeral was taking place. It was like some kind of super-intelligent mirror play that reflected the theme of death. The tracks that objects seemed to have made came to a dead end.

Part of the set of information that I received was that I saw myself getting out of a car that I had just parked at the end of a dead end road. In front of me I saw a white house in its building stage. Also on my left as well as on my right side, I saw such houses. The dead end road, I knew immediately, matched with the dead end tracks left in the field of Boreham Down.

So, during the fifth of November I reacted twice on the Boreham Down 2005 posting. In these reactions I mentioned about the theme of serious trauma, death and the intended connection between the encounter and the formation that came so soon after. It came as a remarkable surprise that Robbert van den Broeke had found a new formation on November six (day after), which funny enough was situated pale at the end of a dead end street… 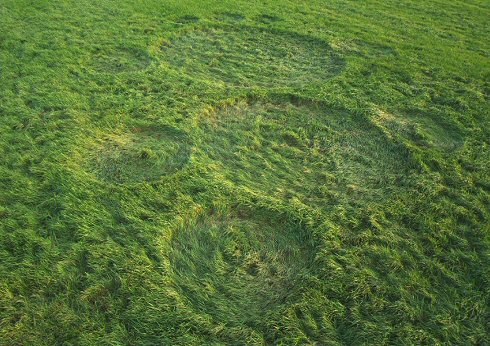 Soon after I saw the pictures of the Hoeven “dead end street formation”, I started to notice the design could well be representing another variety of the Kabbala tree of life. This combined with the dead end street parallel, plús the fact I had petrol in my car, made me go visiting the formation.

It was in good condition and pretty soon I felt the special energies running through my body. It was very powerful. Although I had been given a checklist to work on, I noticed it became hard for me to focus on my program. However, it seemed to me that the formation had all the indications of an authentic paranormal one.

Saying this, it is fascinating to see the pictures that Robbert made soon as he discovered the formation, as it shows the field in frost except for the formation it self. Website Robbert van den Broeke.. 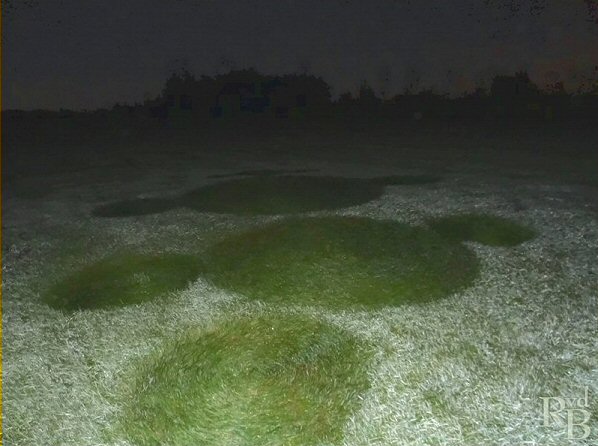 Frozen field except for the formation. © Robbert van den Broeke. 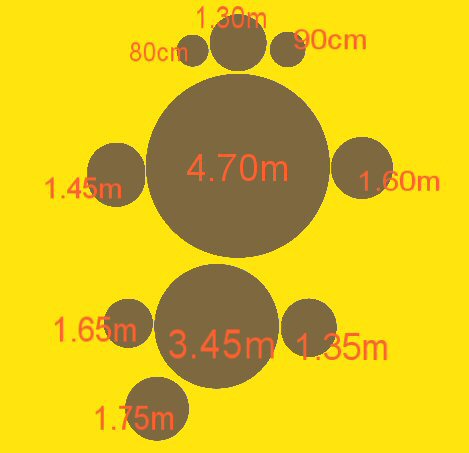 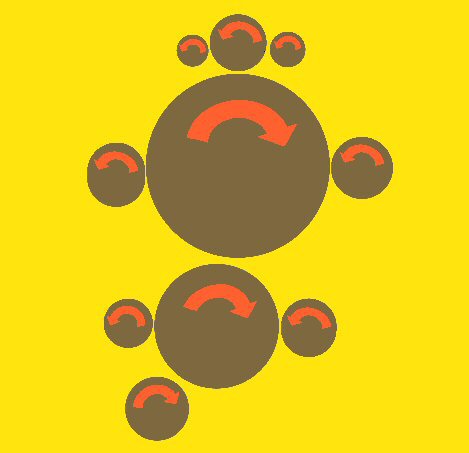 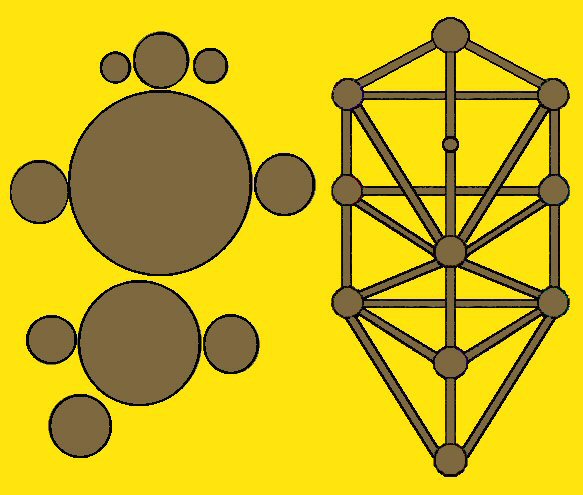 The diagram compared with the kabbala tree as usually depicted. 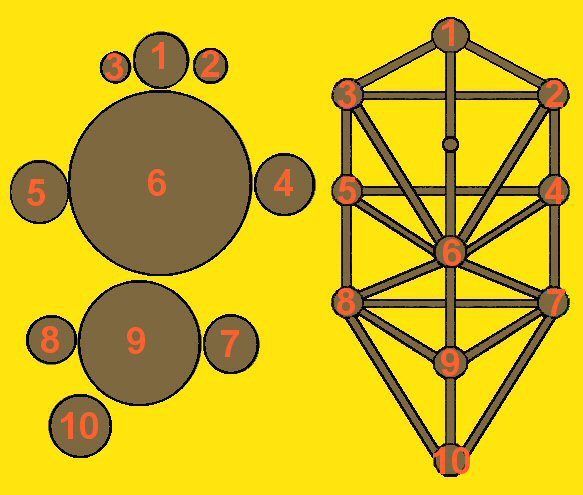 The same with the numbers added in the traditional way.

The following serie of pictures are numbered conform the spheres on the tree as they correspond with their position. I think these pictures are useful for contemplation. I suppose they vibrate with certain aspects of our subconscious in the way that Robbert van den Broeke tells us that simply watching his pictures of the formation is already enough to receive its healing quality. 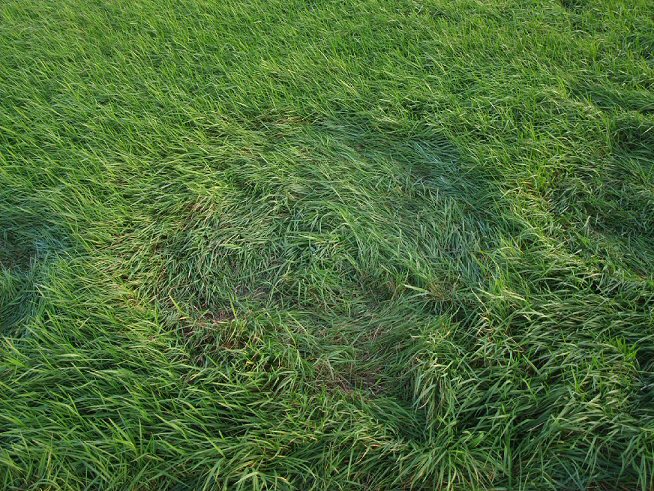 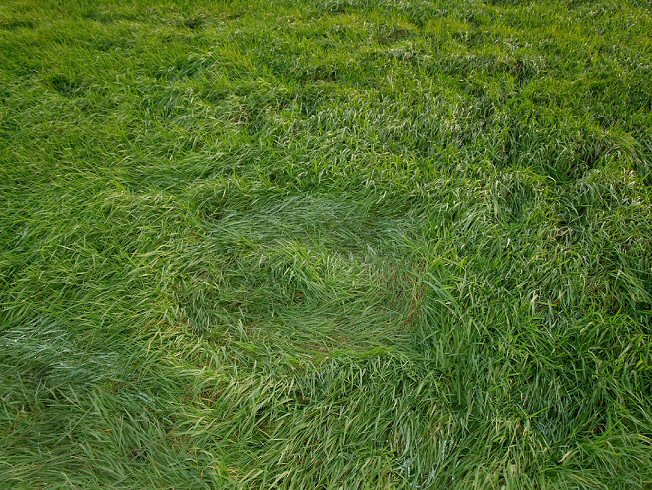 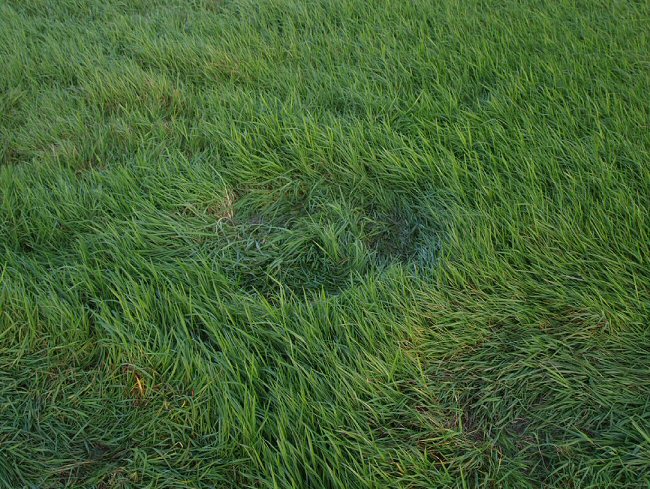 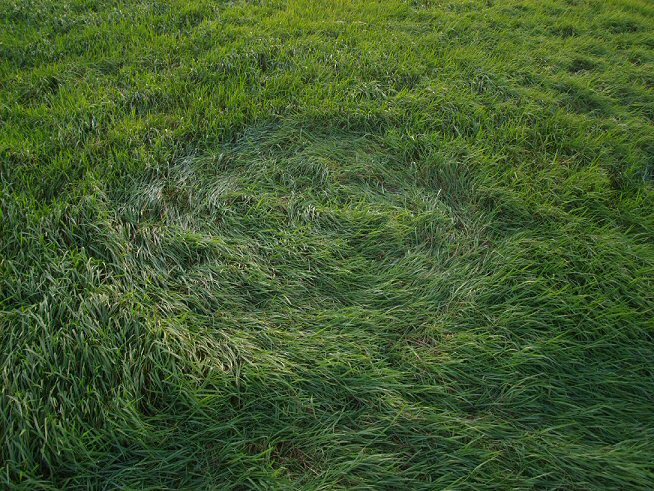 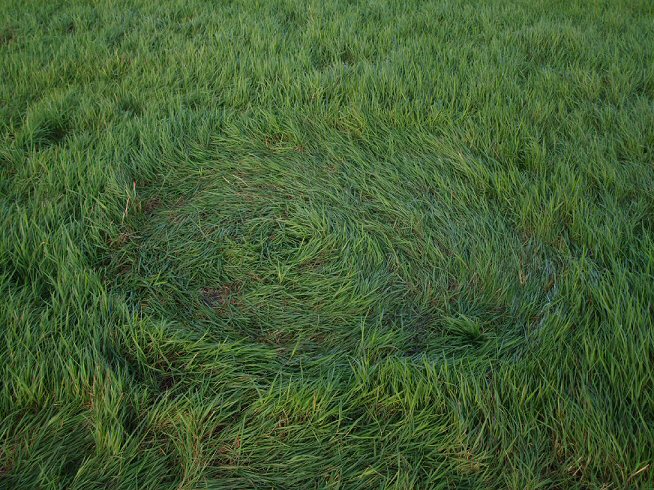 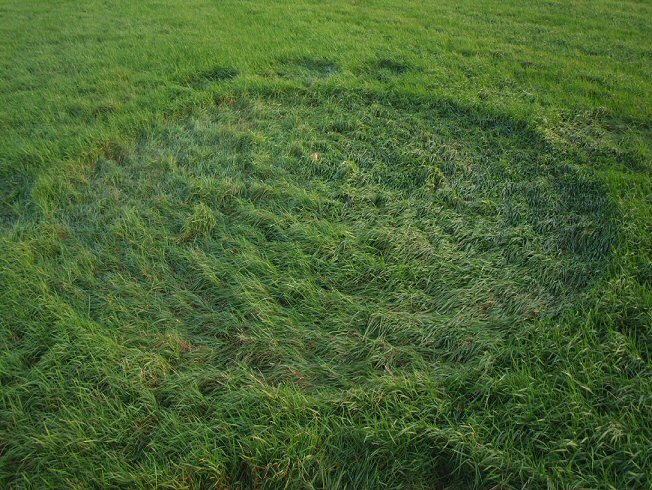 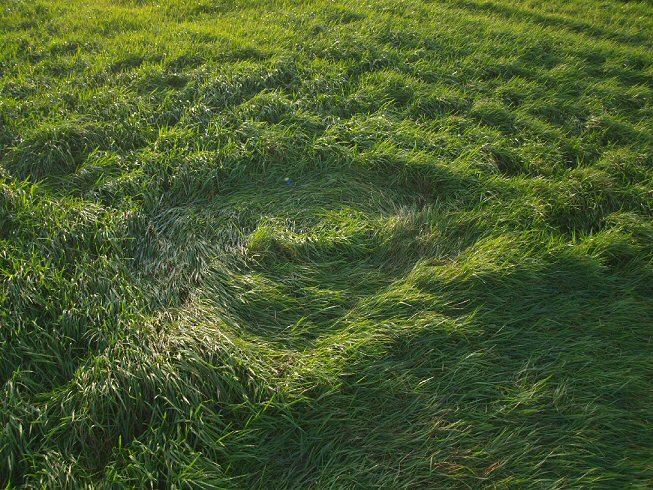 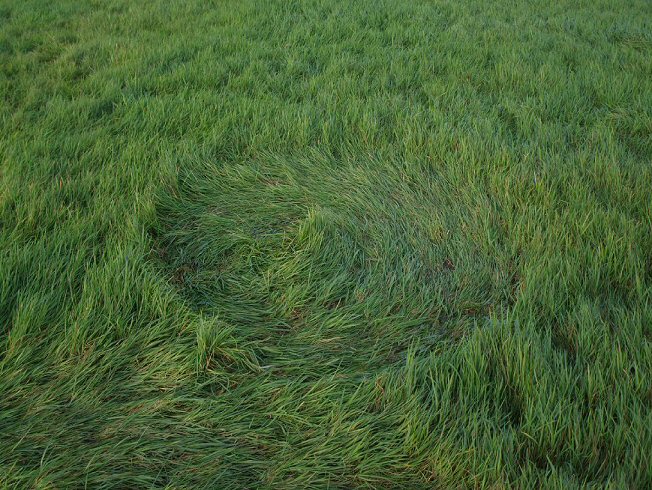 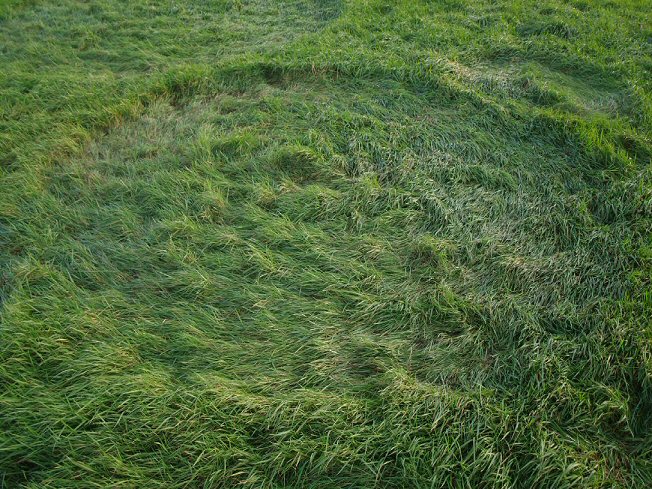 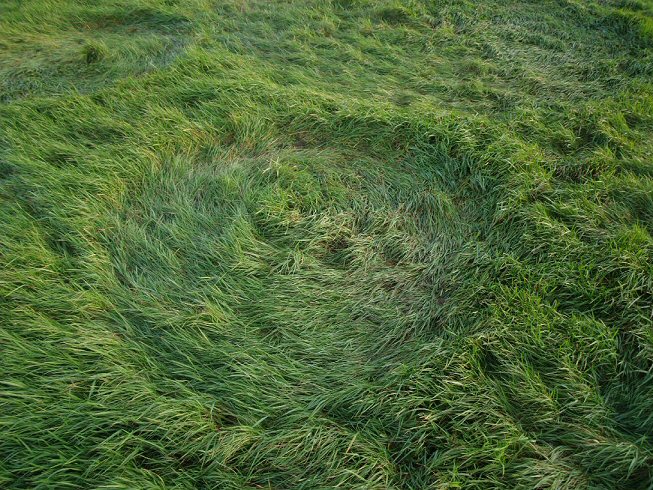 A challenging question that might rise about the unusual way the kabbala tree is designed, is, why is the thing bend? What could be the possible meaning of the misbalance, particularly in the lower regions of the picture?

When we divide the construct into four different levels, we notice the upper two look almost in balance with each other. When we go lower, we notice the Jesôd sphere together with its partners Hôd and Nezach do more or less the same thing as Tiphèreth with Chèsed and Geburah. But then, at the bottom level, we find that Malkuth is a lot more misplaced compared with the other sephiroth or spheres on the tree. 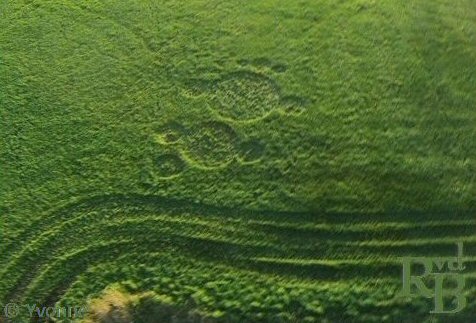 The tracks origine from the gate at the end of the street,
just outside the frame of the picture. © Yvonne.

I like to find the answer in relation to the dead end road, and more specifically, the muddy tracks that follow after the end, behind the gate. To me, it seems the bending of the tree makes it pointing to the bending of the tracks. Would the tree not have been bended, then maybe Malkuth would have touched these tracks, although that remains questionable. However, in any case, Malkuth, our world, seems to have gone of tracks… On the other hand, the positive news could be that it seems magnetically attached to the eternal tree as a whole. 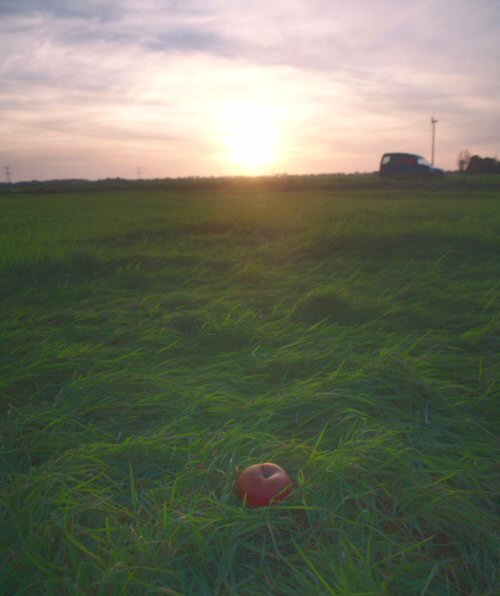