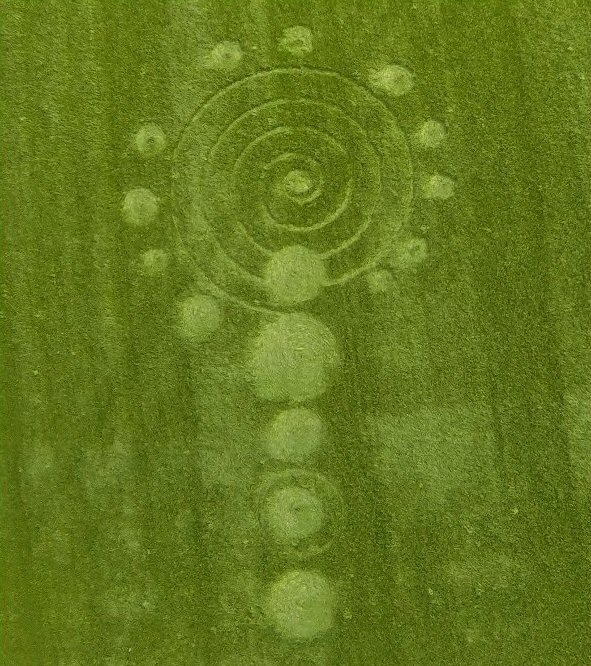 Then there was a thought about all-connecting Yin-power. I came to it by restudying the Greenstreet 2007 formation. At that moment the name “Robbert” came through which gave me the feeling a new crop formation was in the air. It took three days to land on the ground.

It would be the first formation of the Dutch 2015 crop circle season. I predicted the formation independently from Robbert van den Broeke on April 25. At April 28 the formation was discovered. It turned out to be a handsome one in grass. 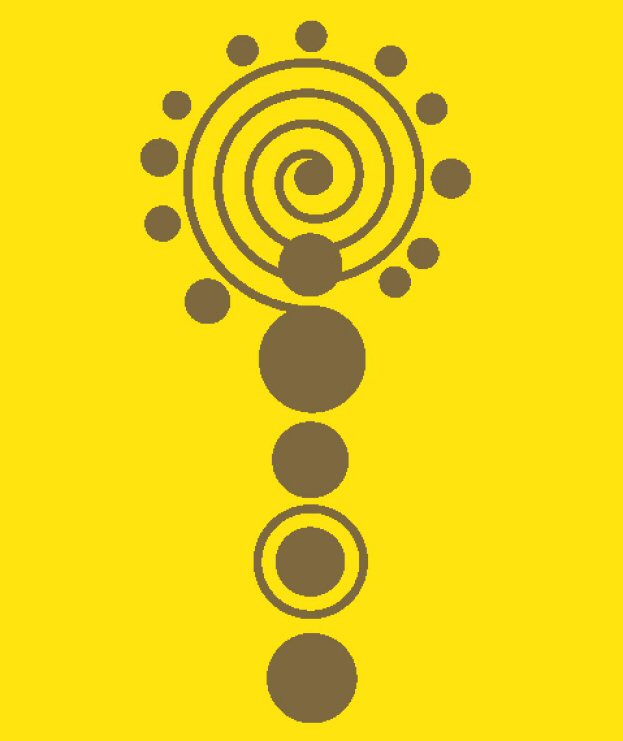 Initially, I have thought to depict the chakra-system as build up from where one enters the field, which means that the first circle to see would be the root-chakra, but after studying the formation for some time, I have to say I am not sure about that anymore. As there are some indicators that can tell us it would be valid to turn the whole thing upside down I am simply left in doubt and leave it to anyone for him- or herself to Judge.

Anyway, the heart-chakra can only be the largest circle of the formation. Striking is the spiral that unrolls from it to end up into either the third-eye chakra or the sacral-chakra. The third-eye chakra concerns the functioning of the inner eye. The sacral chakra rules over sexual and related energies. 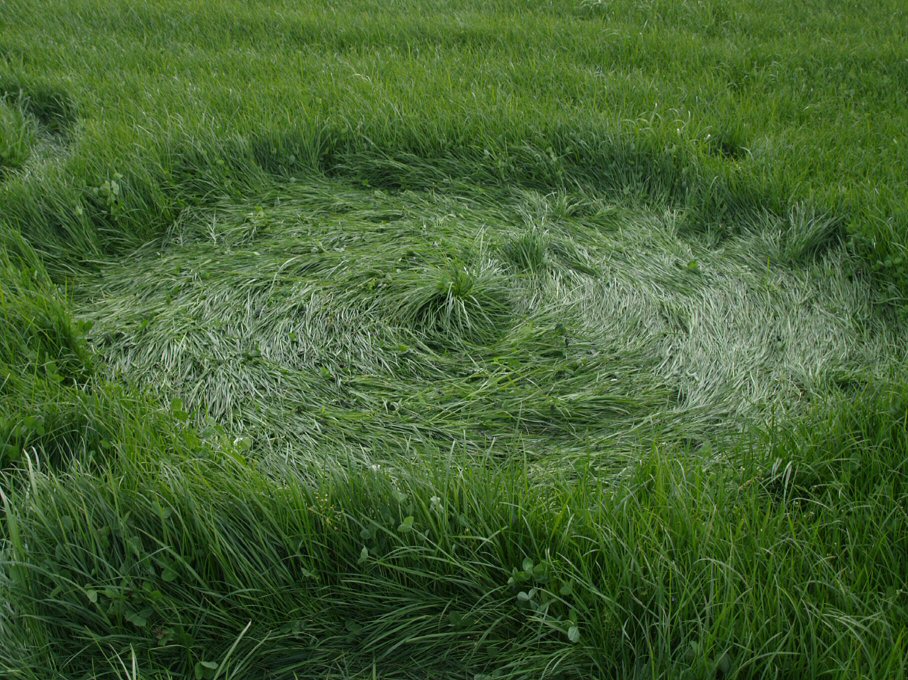 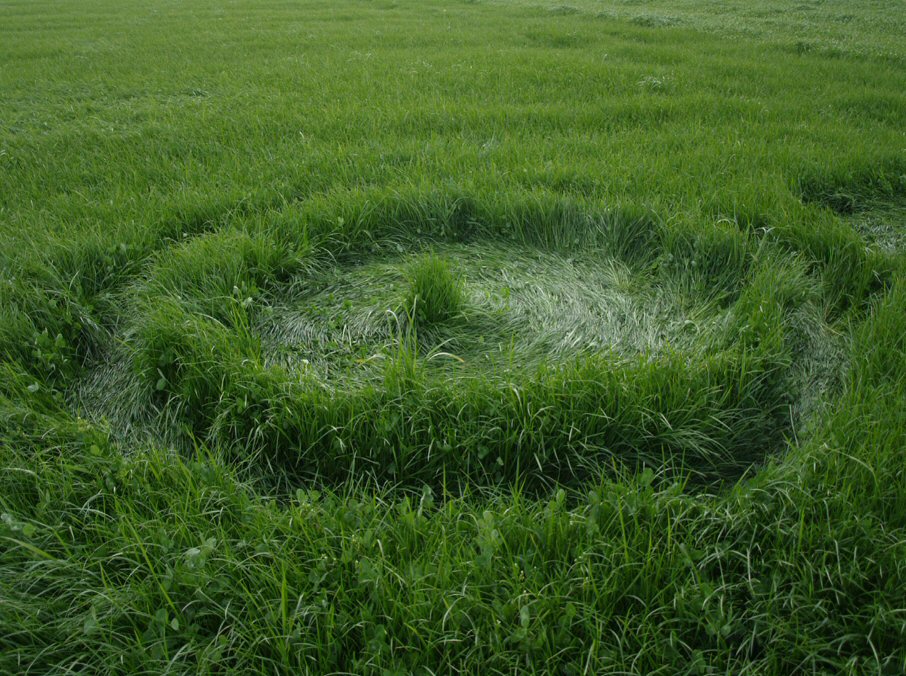 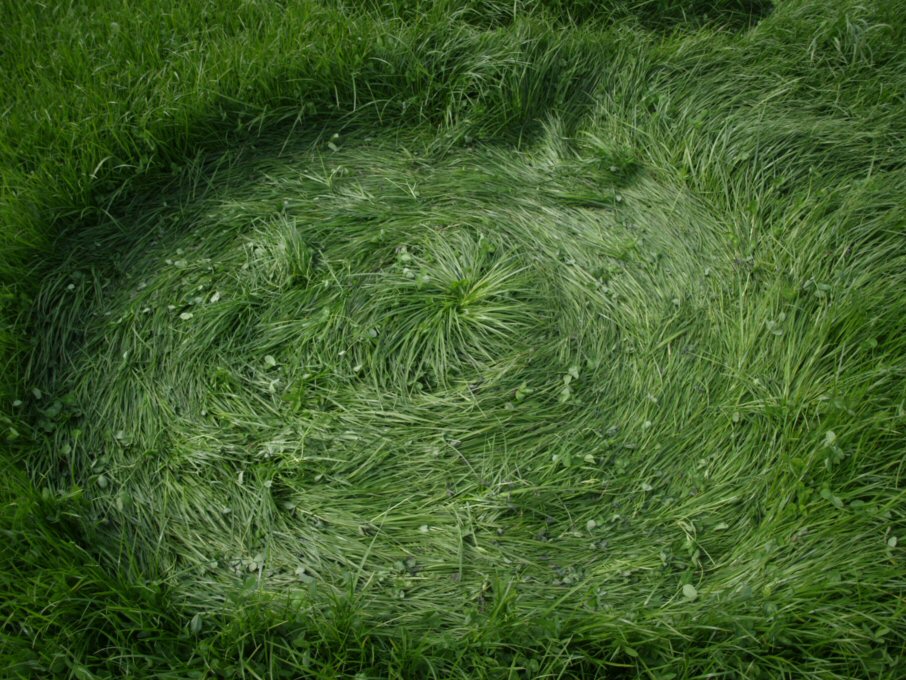 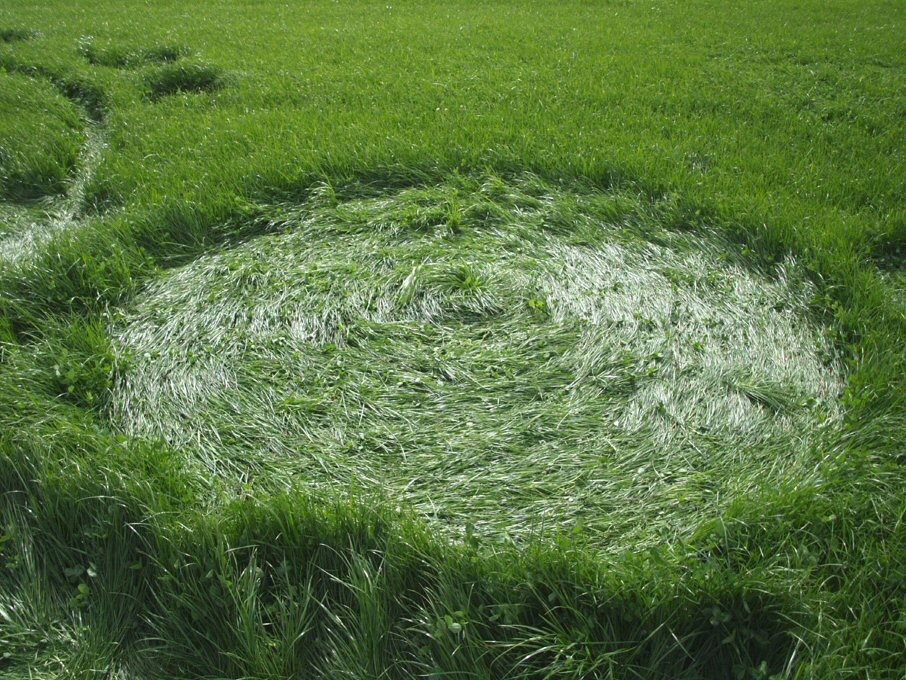 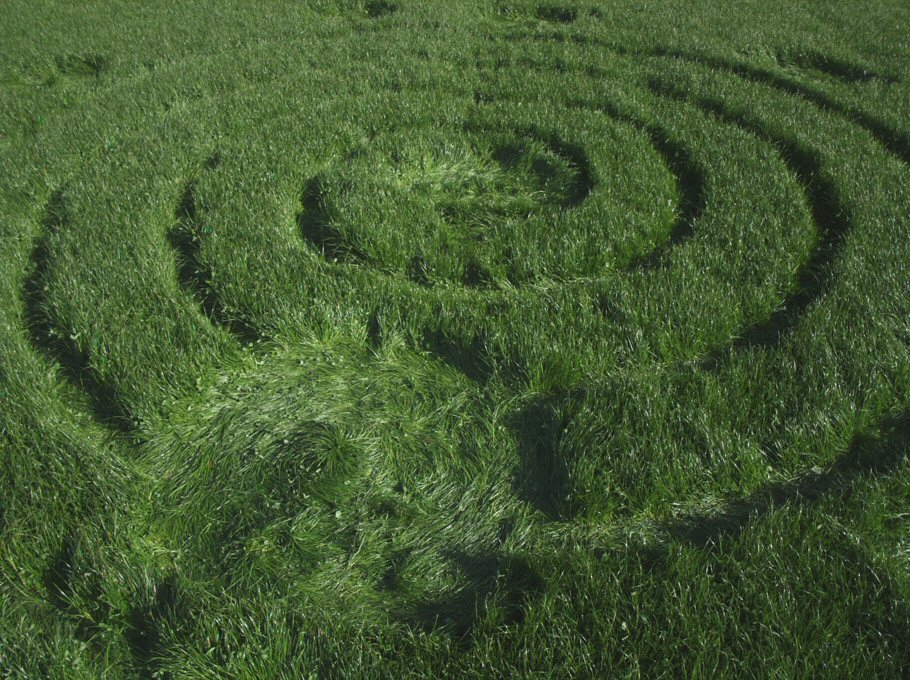 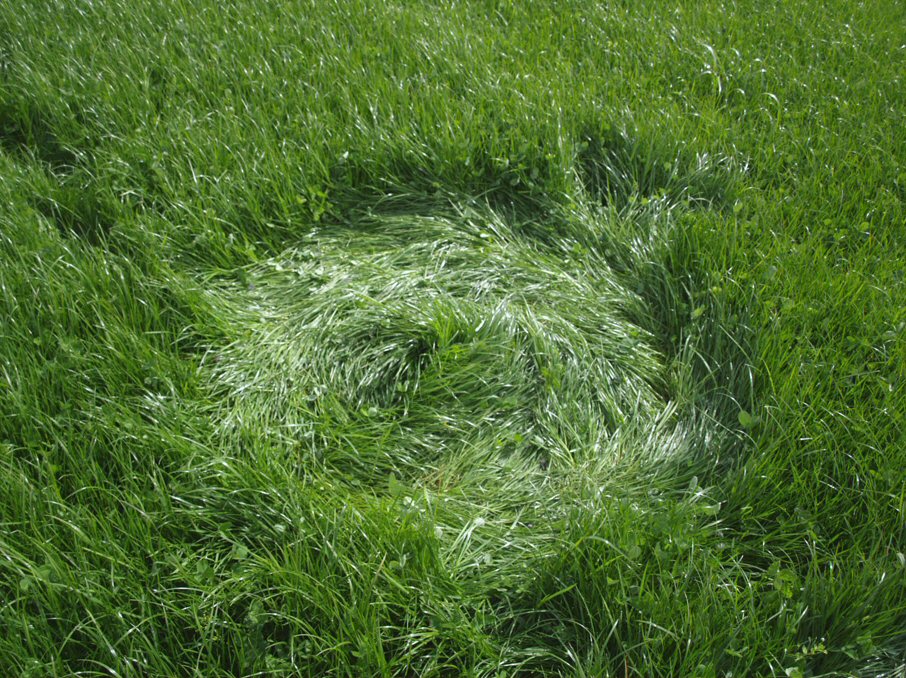 The beauty about the spiral connection of the heart with the third-eye, if valid, I find, is that the language or the desires of the heart are able to come to expression through the inner eye. As a dream-analyst such a connection I have always accepted as a very useful thing.

Big transformational activities are possible when one penetrates the language of symbols that our dreams or our subconscious uses. The formation seems to be willing to say that now is the time to communicate with our subconscious. Measured to our modern hap snap zap culture of technological “progress” it might as well involve a long way to actually master the language of symbols or the methods of dream work. However, from my own experience I know of how immense value this effort can be!

Potential diseases, serious dangers or other unfavourable turns in life, can, through this way, be recognised in time and as a result set to rights. The connection of heart and head is like a merging of heaven and earth. It comes with good health and harmony where there was possible chaos and destruction before.

Would, as the other option, the spiral unroll from the heart-chakra to the sacral-chakra, then we seem to face a long pathway through time that is characterised by sexual desires. In that case we start to see how evolution is driven by lustful energies or at least the hope for sexual intercourse. 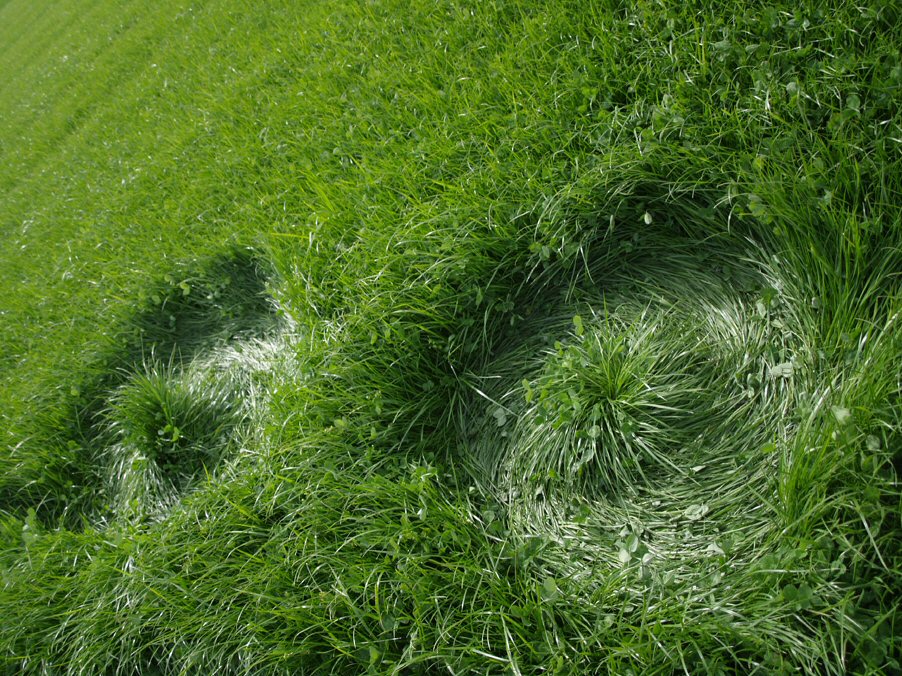 When we don’t include the crown- or the root-chakra, we find ten grape shots around the spiral. Grape shots are little circles in a crop formation that mainly have the character of dots. Robbert considers the grape shots in this formation to be planets. Personally, I tend to think about the Tarot card named “the wheel of fortune”, that originates, as the complete Tarot does, from the Kabbala. The card represents number 10, referring to a new cycle of ten kabbalistic sephiroth, spheres, or to maintain close to Robberts interpretation; planetary spirits.

The complete design therefore would give us an impression of a micro-cosmic system (chakra’s) entering the outside worldly macro-cosmos. (wheel of fortune) Another interpretation speaks to me as follows: The grapes can represent knots of karma. Stuff from past life’s that need to be dealt with. Maybe these grape shots represent past life identities. 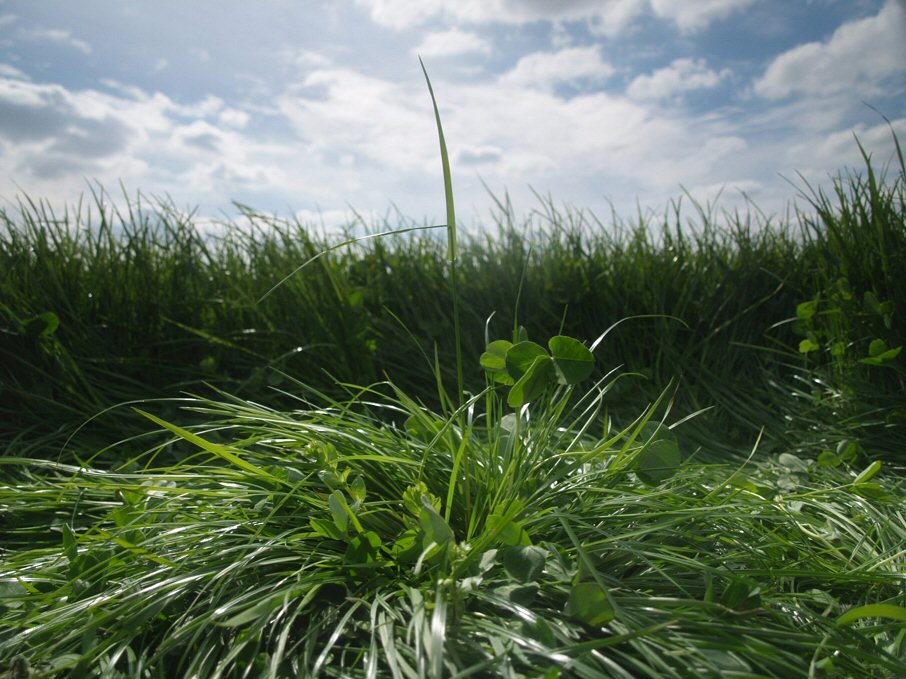 Detail of one of the 10 gapeshots. © Randell.

After carefully observing the aerial picture I have noticed something interesting about the positioning of some of the circles and also the spiral in this formation. By the view of some of the old overgrown tramlines, one would imagine they are used for the construction, or if not, that they add some meaningful information to the design. 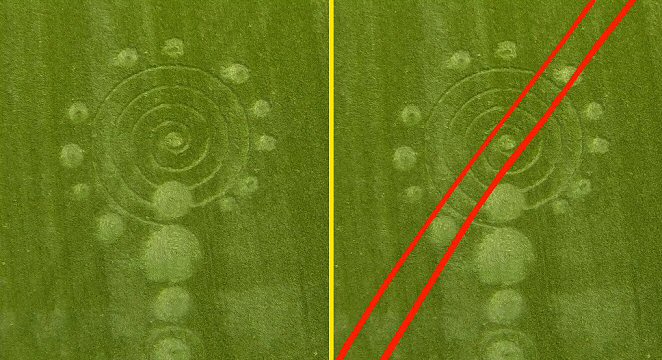 The dark tramlines are so subtle that they could not be seen from the ground. 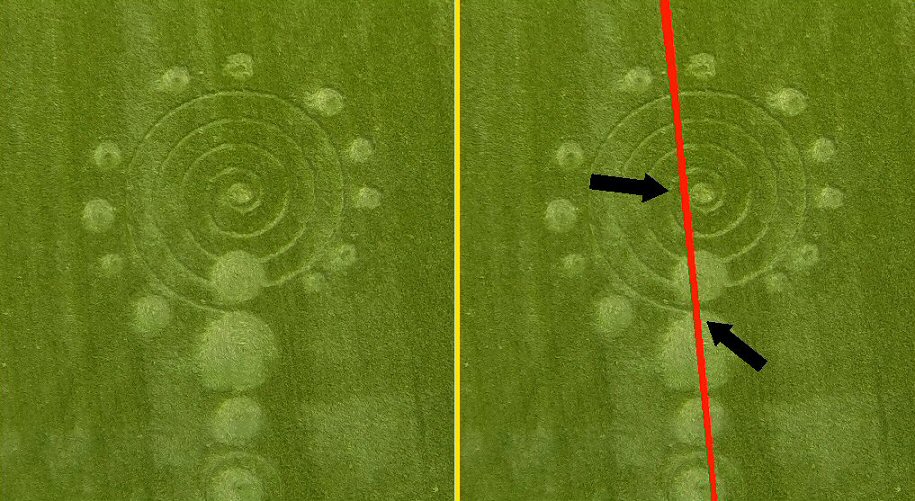 This line marks an almost invisible ditch that can be detected
on some pictures taken in the formation. © Randell.

In some of the ground pictures an anomaly in the spiral can be detected. This is due to a very subtle ditch that fades away towards the direction of the road. The black arrows point to the beginning (at the heart-chakra) and the end (at the third eye- or sacral-chakra) of the spiral. 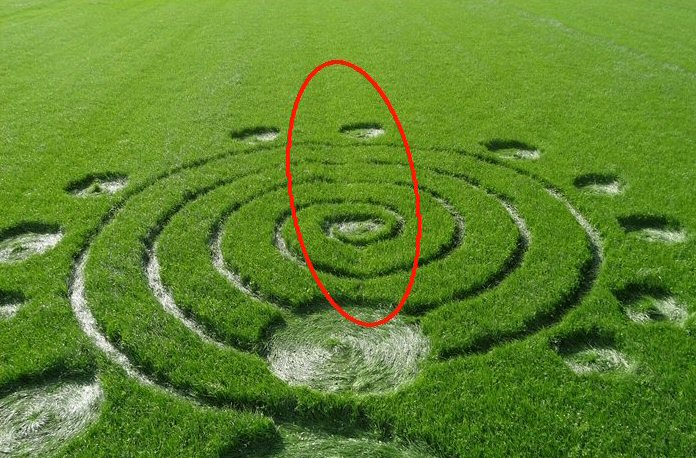 The anomaly in the spiral is best visible above the center.
© Robbert vd Broeke, edit; Randell.

After taking these observations into account, my suggestion would be that the first grapeshot that fits so well in between the old tramlines can be interpreted as a chakra, this due to its size as well as the fact that it belongs to a straight channel. In relation to this, it can be argued to consider the crown- or root-chakra (the one at the top or the bottom of the row of chakra’s) actually being a chakra at all, as it doesn’t seem different from neighbouring grape shots… (Here we have the typical difficulty that often appears in good crop circles.) A solution, in my view, would be, that all the grape shots represent chakra’s, but actually maybe just one chakra in different positions. Of course, that would be the crown-chakra or the root-chakra as we need it to complete the picture.

As the third-eye chakra or otherwise the sacral-chakra seems to roll along the spiral, it also can do this along the vague tramlines and/or the ditch. These options might as well lead to the idea that the spiral can be understood as a long pathway through time and that chakra’s evolve along that spiralling line. This would then confront us with the change in nature of a chakra. As another idea involved with the various paths can be mentioned the mystical initiations that provide quickened evolutions. It stands that such methods should be associated with the straight paths, not the long spiralling way.

Soon after the appearance of this spiral/chakra formation another stunning formation was found in the same field. It spoke to me in many ways, to begin with the impression of a “bi-polar” system.    It happened to be the case that during my visit at the spiral/chakra formation, I settled down in what I considered at that moment the crown-chakra (the grapeshot type thing), in order to speak with a talented woman from Eindhoven, called Loes. During our conversation she brought up the theme of bi-polar disturbed children who she would work with. I challenged her to tell me more about the subject because in my personal life I was recently confronted with this psychic phenomenon.

Although Robbert van den Broeke explains his formations often in astrophysical or astrological terms, I prefer to concentrate on the psychological, metaphysical or characterology aspects of them. Also here. Robbert van den Broeke talks about other solar systems, I associate with psychic centres within the human construct. The bi-polar impression of the new formation seemed to me like a response to the talk and the karmic confrontation I had with the bi-polar theme. 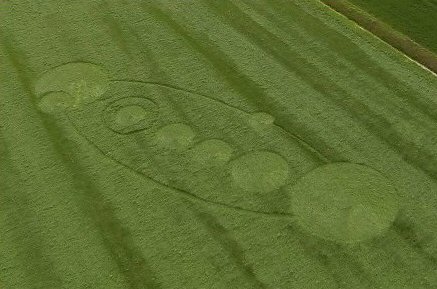 In this second formation some of the chakra’s of the first formation seem repeated. The overall impression lead me to believe the order of the chakra’s can possibly be turned around. Here I seriously started doubting the order I thought the first formation exposed… Maybe things needed to be seen upside down? Or maybe things are seen upside down by a bi-polar character? Or maybe this is simply a matter of evolutionary goals?

Compare for example with the attractions between male and female. The male evolves towards the female, while the female evolves towards the male. Heaven is able to go down and carry the earth, where as earth can reach up to heaven. The same polarity moves can be the case with certain specific evolutionary goals within human souls. Some people, for example, need to overcome fears for physical contact, where others would be helped with more intelligence. Some people need to grow in material skills, where others are better of with spiritual understanding.

Whatever the evolutionary goal might be, balancing the chakra’s will be beneficial. 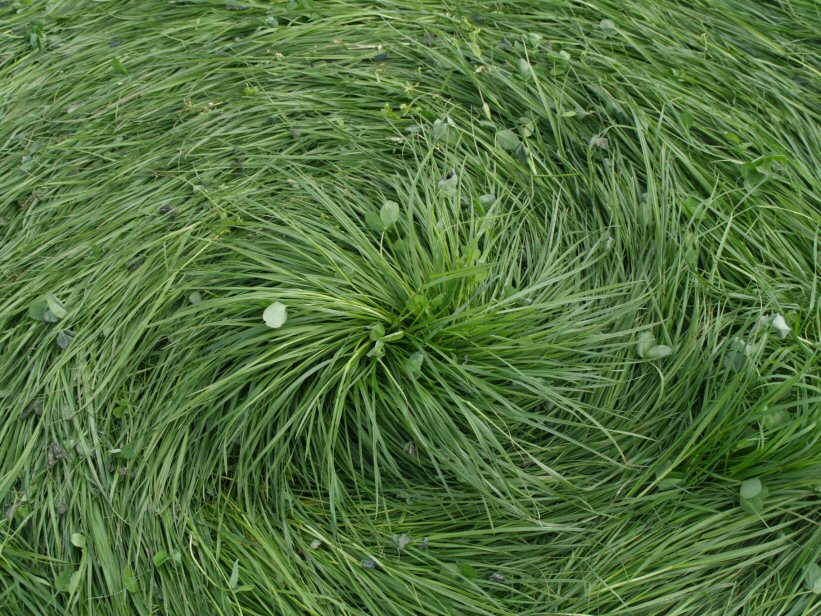