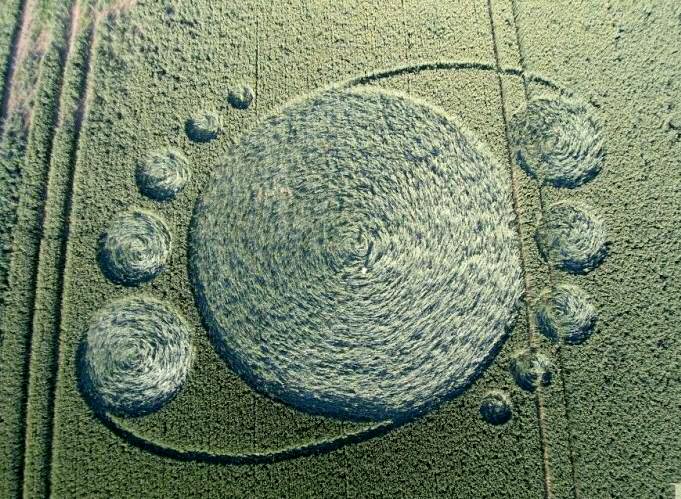 Soon as I arrived on Tuesday 16, it occurred to me that this formation was much deeper into the field than usual with the Robbert van den Broeke formations. The field itself had never before been subject to a crop circle too. Wondering about a possible reason for the exception, I found it interesting to see the formation being placed directly near a large zone where the wheat didn’t want to grow. 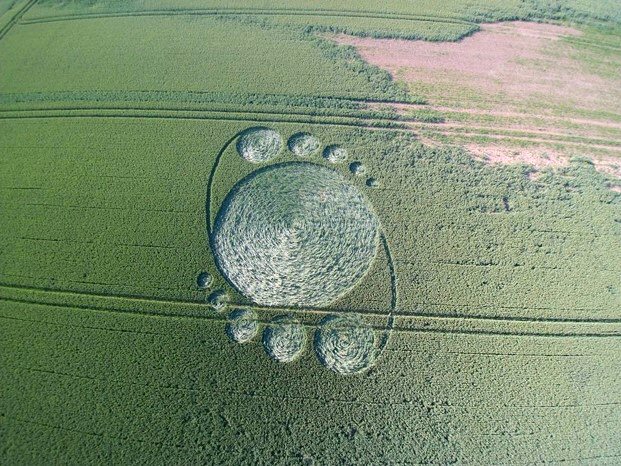 The formation next to infertile ground. Picture: Michel Koenders. 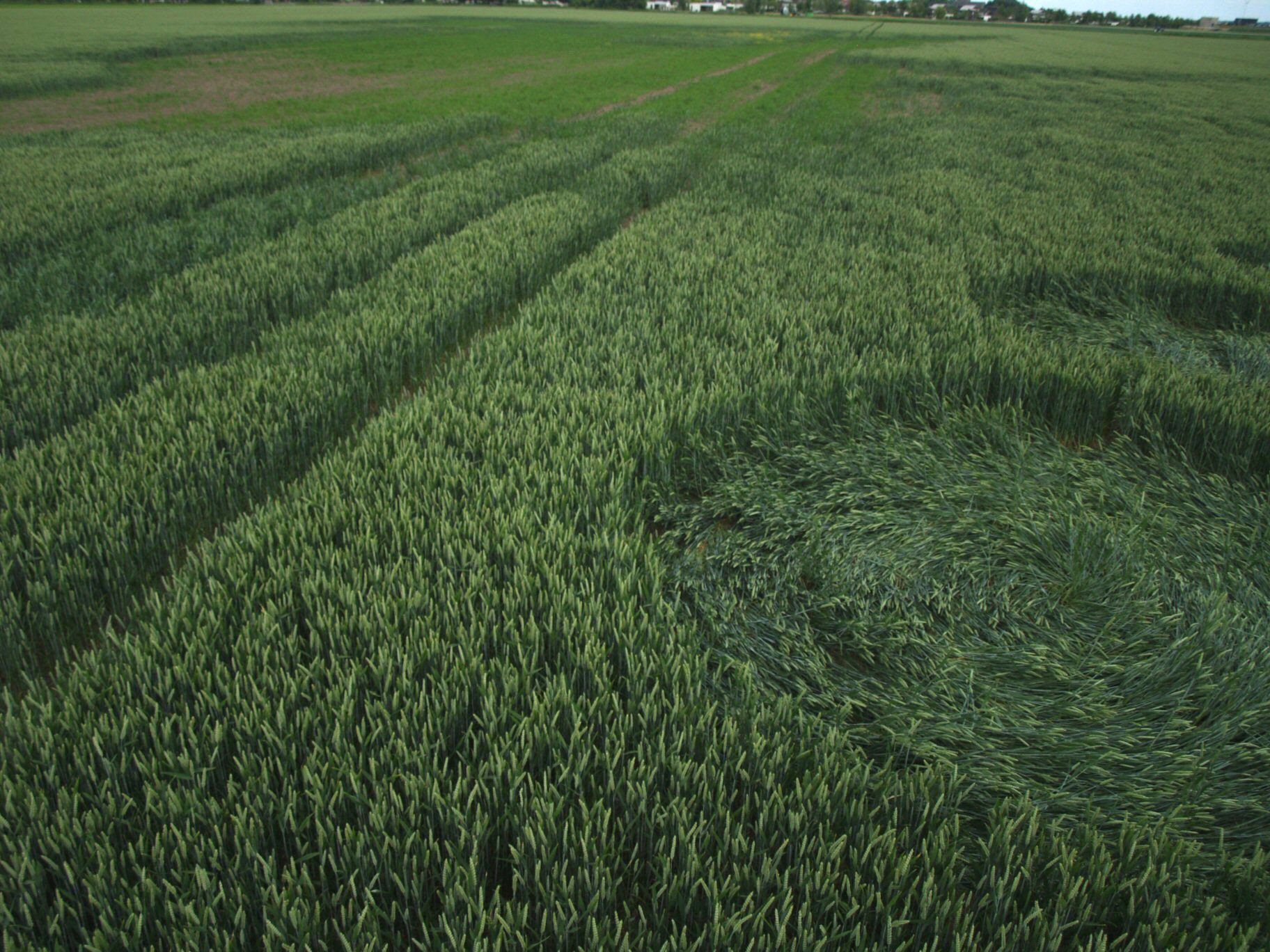 The formation next to the infertile ground from another angle. Randell.

The design of the formation I find both interesting and aesthetic. An intriguing play with duality in combination with unity, I would say. By the fading size of the orbiting circles there’s the impression of a turning wheel or something. These aspects remind me to a Wiltshire crop circle of which I recently came to know it links to “brainwashing”. 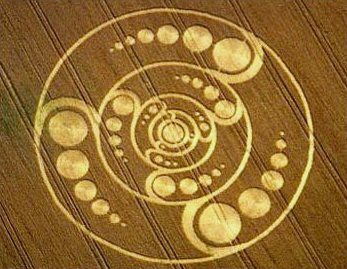 Another feature of the Merenswegje formation is in the design at the location where the large central circle touches a tramline. It looks as if the circle is cut or flattened by the tramline. Would the circumference of the circle have continued as the eye tends to correct, there would have been a contact with one of the smaller orbiting circles. 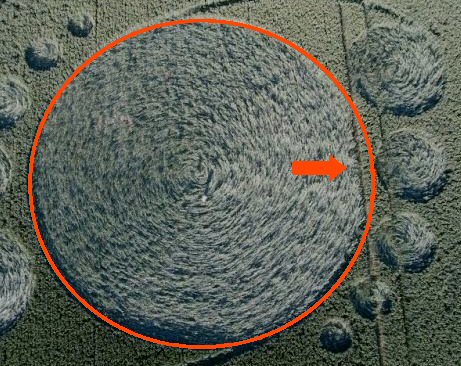 The part that is not flattened.

This feature feels to me as a significant and intentional aspect of the formation, although it is hard to grasp its meaning. I spend a long time in the formation, more than four hours, in which I soon became disorientated, and consider an indicative symptom. Certain intentions I had I could not fulfil as the formation was doing its best to distract me in its most amusing ways. Now, twenty four hours later, I still feel messed up by its wonderful influence, and noteworthy, I had a powerful dream early this morning in which I had an encounter with an extra terrestrial! It came out of a UFO that had a remarkable resemblance with the drum of a washing machine. Connect the dots, here!

In an attempt to formulate a reasonable interpretation I can’t help it to involve idea’s that concern relational stuff that people can have with each other. It is the polarity aspect that makes me think in this direction among intense experiences I have been through lately and that seem more or less to have been mirrored in most of the recent RvdB formations. The formation that came before this one even had a design that I drew just before it it appeared in the field… 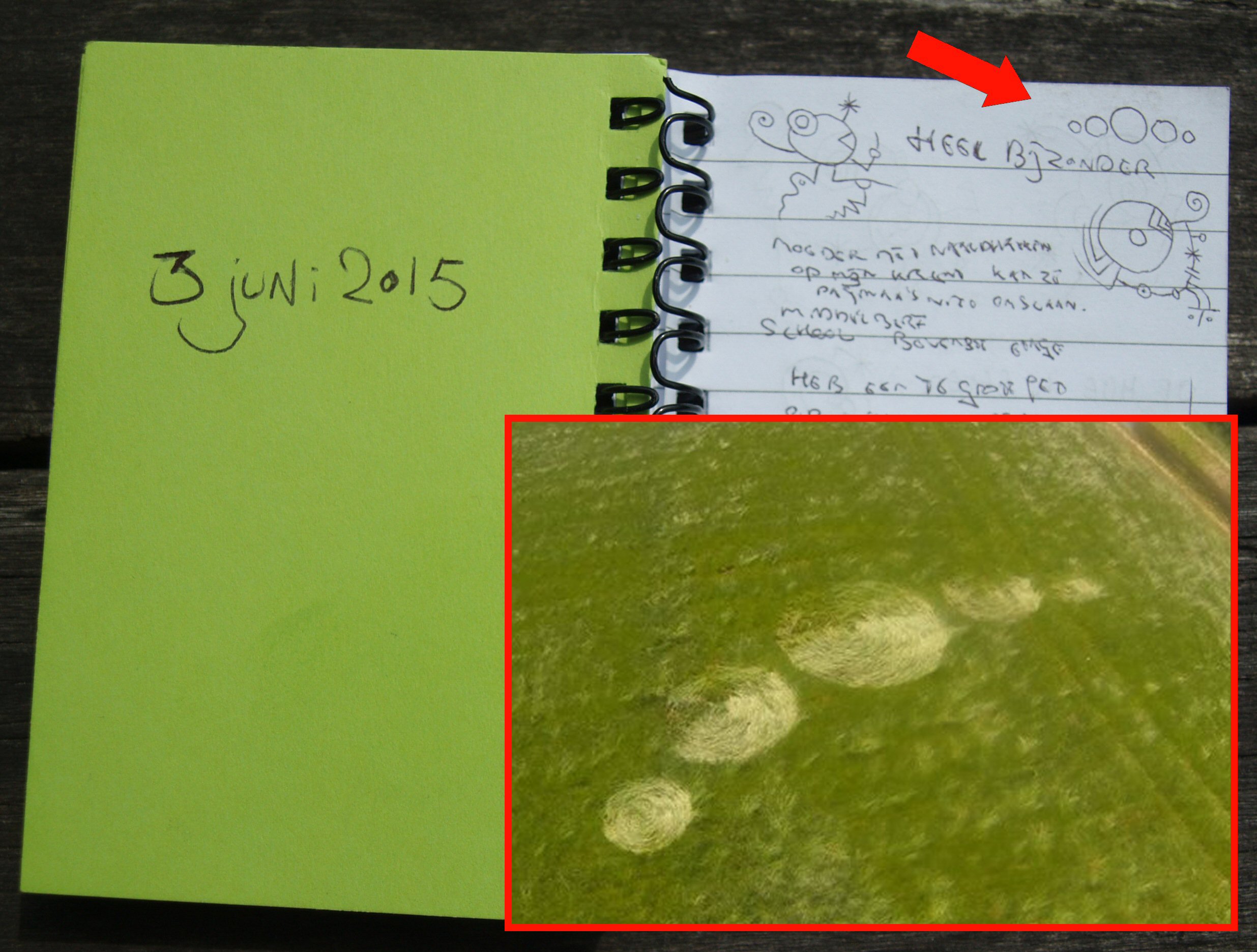 Doodle made just before the appearence of the “Junction North-corner formation”.

I drew it as a little doodle in reaction to a voice that came through, saying; “very special”. The “very special”, I am convinced, has everything to do with a powerful act I performed that evening which can be considered transformational at the level of a close friendship. For privacy reasons I don’t want to go to deep into details, but to give at least a clue, it involved a definite goodbye. Doing so, I immediately came to a profound  realisation about my extreme, and until than, mysterious desire. It once again confirmed to me the idea that so many psychological issues we proceed in relational matters, we can also proceed simply within our selves, without the need of a partner. Of course, one needs to have the will and the understanding how it can be done.

Words like these may seem contradictive to earlier writings of mine in which I promote the unity between the sexes, between Yin and Yang and between heaven and earth, but that’s due to the inner logics of, shall I say, “nature”. Circumstances can have it that similar looking situations sometimes apply different remedies. 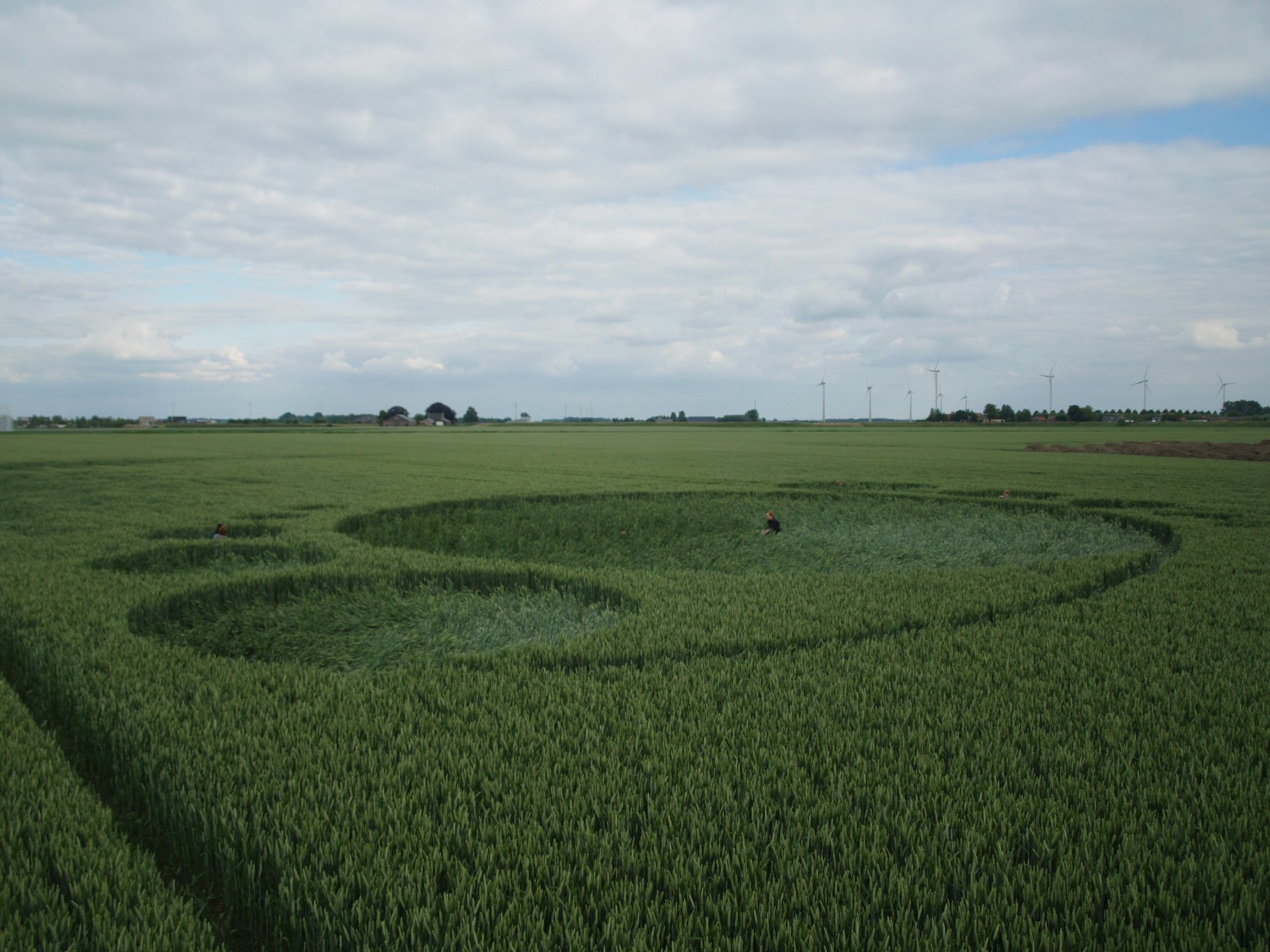 To cut things short, the interpretation I would like to bring forth goes like this. When we take the idea of infertile ground symbolically it may as well refer to an unfortunate loss of life potentials. The two opposing poles can tell us about the separation that seems to sustain, in spite of (growing) efforts to reach the opposite position. I think it is evident that separation easily includes endless confusions, miscommunications, ignorance, etc., which can be summed up as infertile ground. Luckily, the formation has reserved a very large place for the idea of unity. The central circle seem to be the big mediator that gives the opportunity to identify or find ourselves in the position that has overcome the dualistic conflict. Impressive I find the two bridges that unroll from the largest orbital circles towards the centre of unity. These bridges seem to point to a change in the pattern the orbiting circles expose. 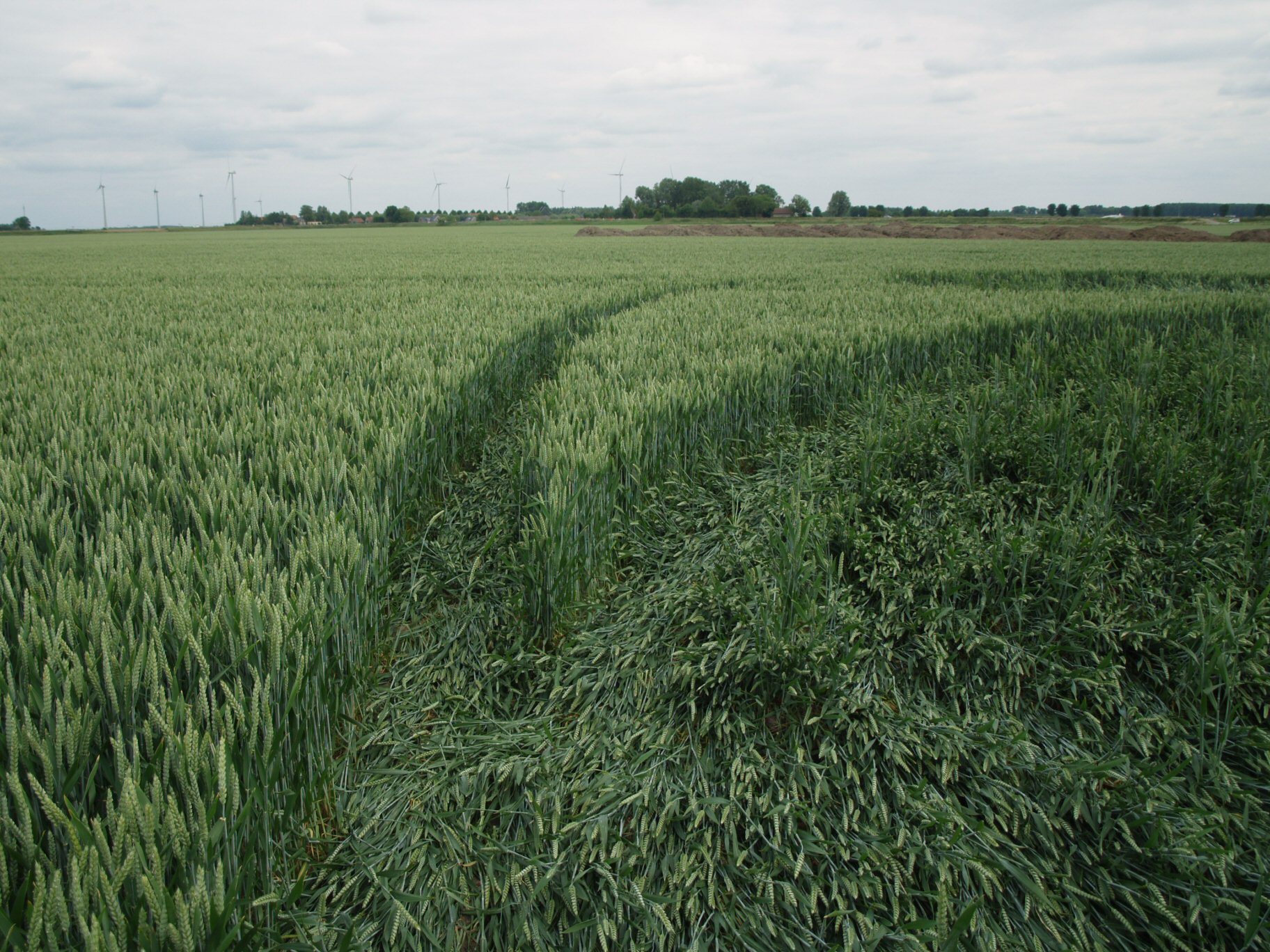 Interpreting trains of orbital circles as growing entities or individuals is of course a subjective thing to do. Nevertheless, the idea might as well resonate and contribute in our search for answers.

One more thing; when we place these trains of growing dots next to the brainwash association I mentioned earlier, I suppose we could think of them as implanted, repeated and therefore growing suggestions. Self-suggestions or brainwash through modern media can keep us caught in seemingly endless cycles of restless desire. Most often cycles of a dualistic nature. The formation could help us overcome the fruitless conditions of conflict. It may help us to overcome infertile trajectories by making a real change in the observed patterns. Unity consciousness has the power to return to our original source and thus find peace in our heart.