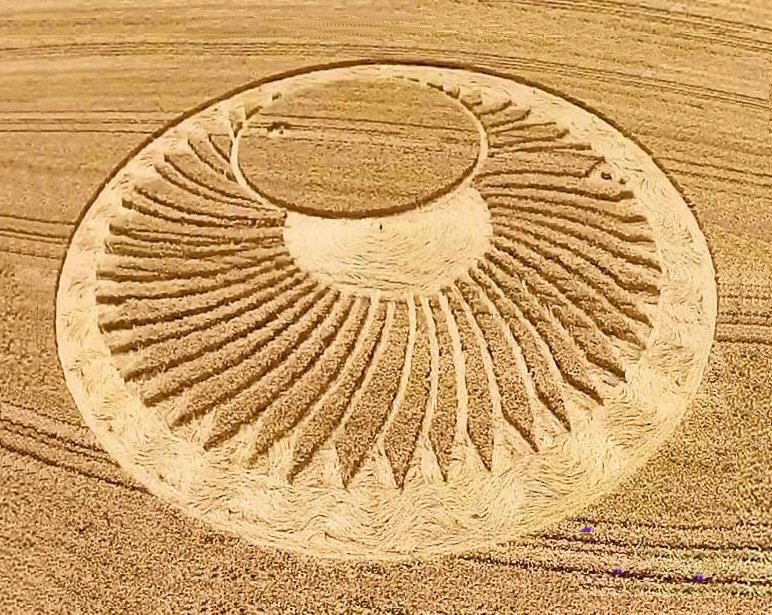 As we keep close FB contact with each other, on  the evening of Friday 19th, the day before the crop circle was reported, Marina Sassi and I were chatting about the possibility for her to visit Wiltshire UK this season. She explained it had become impossible for her, so I wished her many crop circle visits in Italy…

Was it at the very same time a crop circle formed in her area Together with her friend Angela Galeotti she would be the first person to enter the formation as they also did with the Bracciano 2012 formation that has similar characteristics. 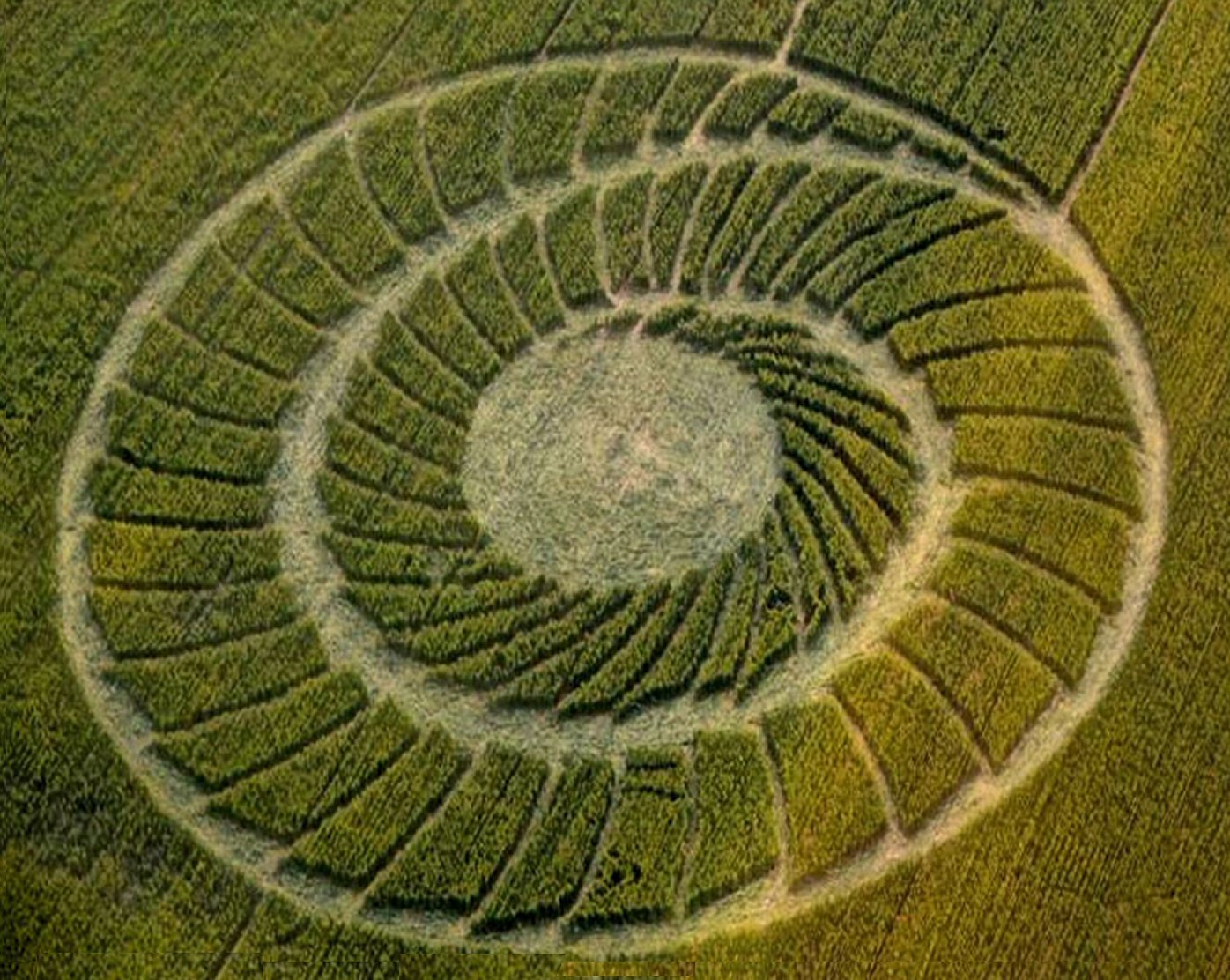 The design of the Cervia formation makes it possible to find multiple interpretations. A very nice one, that soon came to me, was given by my friend and website operator Bartke Maatje. She thought of it as a mushroom seen from below!

Other associations that followed varied from a sun eclipse to Niburu moving up close to the Sun to a UFO rising up. It shows how easy it is to project personal preferences on the art-pieces of this type.

The initial association I had myself with the Cervia formation was that of a stairways to heaven. A little later I started thinking of “files”, “pages”, “updates”, “pictures” or “images”, idea’s in that area. At first I came to that idea by thinking of Marina Sassi who lives near enough to the formation to think of it as some kind of message for her. Marina is a great artist who has a very strong imagination which made me associate with “many images”. 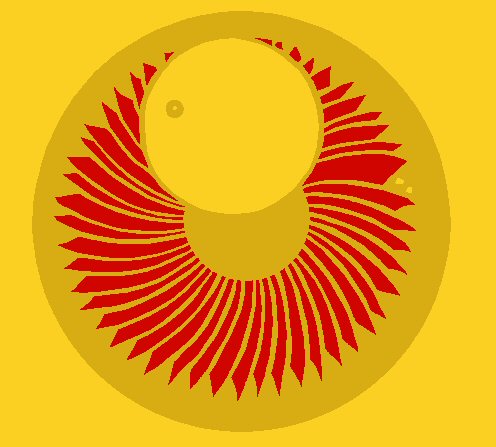 Diagram: In red the files or images.

If it wasn’t clear yet; the red elements in the diagram represent the files of images or what evers. It leaves us with the begging question what the disk with the off centre dot is about? A solution to that hit me while I was working on my brand new crop circle website. In particular when I was updating information to certain posts. A funny little turning symbol, quite similar to the disk, pops up while the update gets processed. 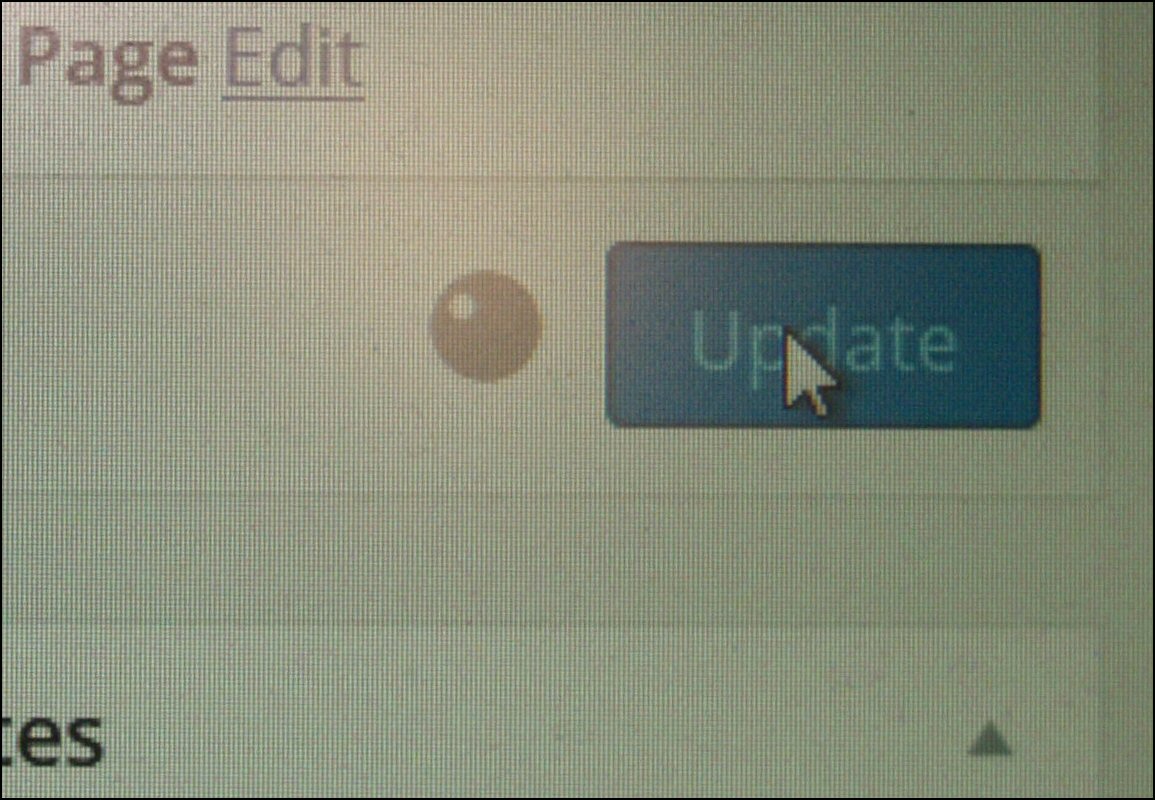 The symbol at the update button. 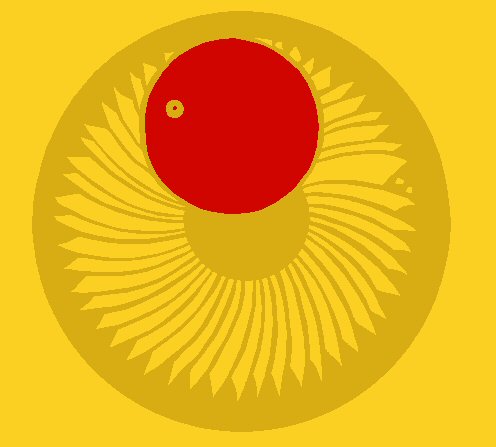 Diagram with the symbol in red.

The find occurs to me as trivial in terms of objectivity as it seems so obviously related to my own personal activities. Nevertheless, I consider it intriguing enough to share while it shows how much the crop circle phenomenon is able to connect on a personal level. Of course it also possible to view the design as general symbol for a  database or website.

In case the difference in size and look of the off-centred little circle makes it hard to accept the idea, I would suggest that the off-centred object in the formation is actually an improvement of the design of the symbol, as it is well able to depict a “data point”. In 2014 I had a powerful confirmation about the theme “data point” as depicted by certain crop circles.

One might, as I hope, agree that the pages/images together with the update symbol form nice associations for further interpretation. Until here it could say something in general about updating of images or files, but I really started to scratch behind my ear when I counted the number of pages/images. There are 47 visible pages in the formation while the coincidence happened that I had a total number of 47 articles transfered from my old website to publish onto my new website…

About the two little anomalies, if I may call them like that, they, in my subjective approach, could represent two more articles to be added. These articles cannot be found on my old website because they are brand new. One is about the Zevenhuizen formation of June 19th 2015, the other is exactly this article! 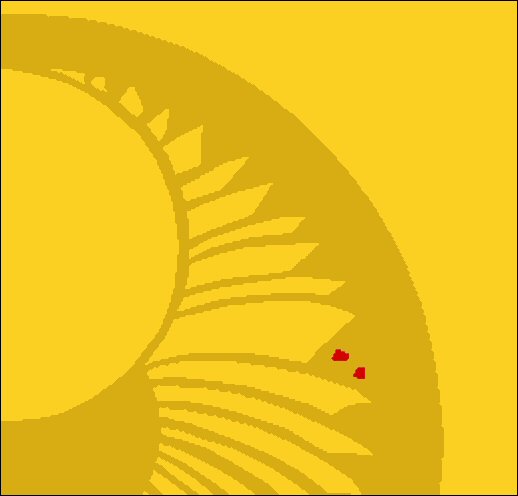 When the two anomalies are seen as “extra pieces”, it becomes apparent that they are about to be placed in the wider gap that seems opened up by the update processor. This is trippy again.

All together, if this interpretation is valid, it seems that I am very honoured for the work I am doing. What it means to me, is that I feel very much encouraged continuing to deliver crop circle interpretations to the outside world. I can only conclude that my efforts please the creators behind the phenomenon. Sometimes I wish these efforts would find more support on the ground as well, as there’s so much to be done here… But with such support from the spirit world, it seems to me misplaced to complain at all. In fact, I am very grateful being able to do this work. 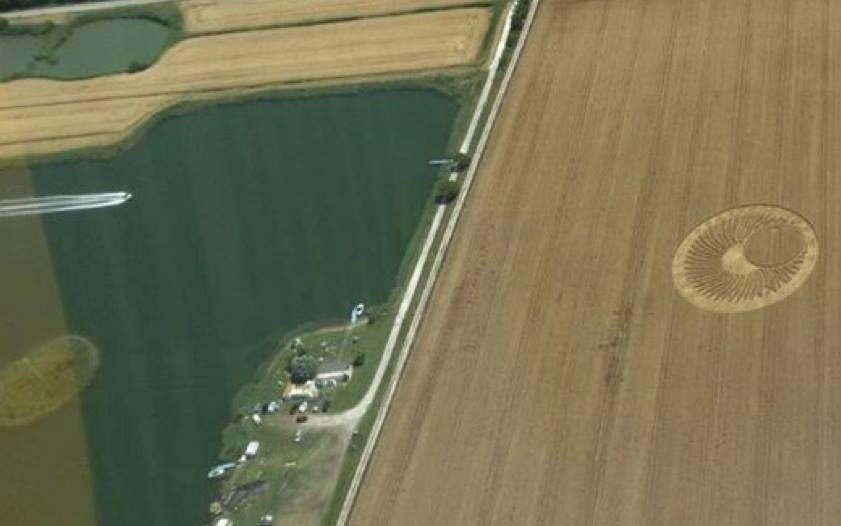 Best picture of a speedboat approaching a crop circle ever!

Before showing some of the pictures Marina Sassi and Angela Galeotti had made inside the formation, I share a short excerpt from the FB chat-conversation I had with Marina the evening before it was found.

In the conversation I tell her about a dream I had in which I had an encounter with an ant type extra terrestrial. That dream came the night after having spent more then four hours in the RvdB formation at Zevenbergen earlier that week.

As a result I let her read the article I wrote about that formation which is on my new website and that I have not opened to the public yet. So, she was actually the first visitor.

R: Not sure about the date yet. Maybe a bit earlier.

M: I was thinking about to go there but..  I have not booked the airplane in advance and now it is too late and it is very expensive..

R: That’s the trouble. One needs to really want it and be sharp on how to do it.

M: yes… it is not easy.. and also the office told me when to have holidays..

R: Maybe you will visit many Italian CC’s?

M: they are too far

maybe some will come here (grin-emoticon)

R: When you have holidays? 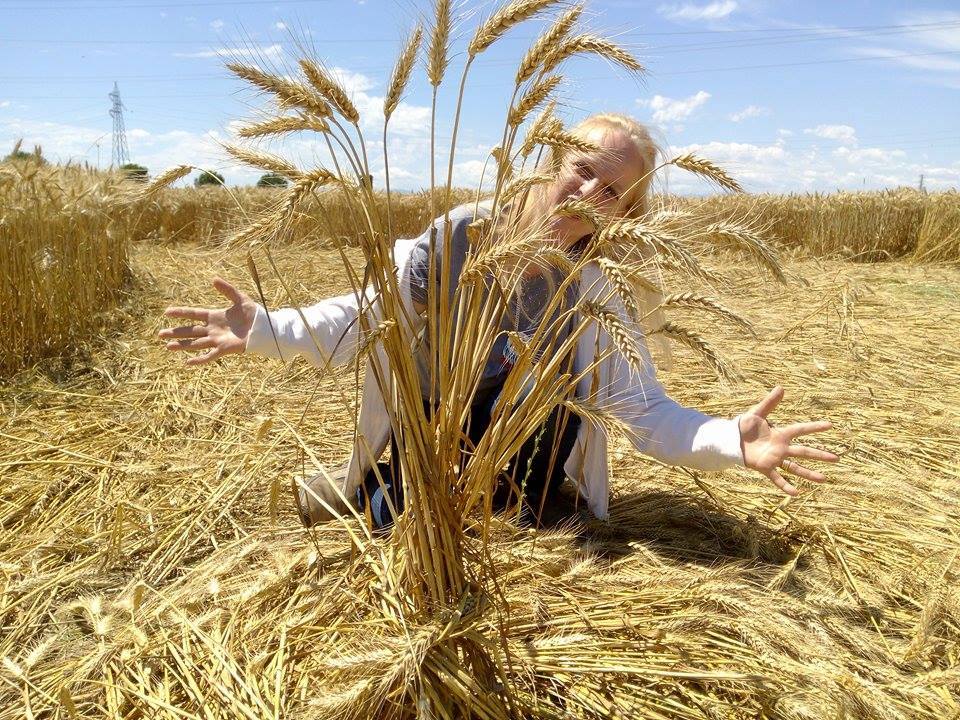 Marina Sassi behind a fountain of barley. © Angela Galeotti 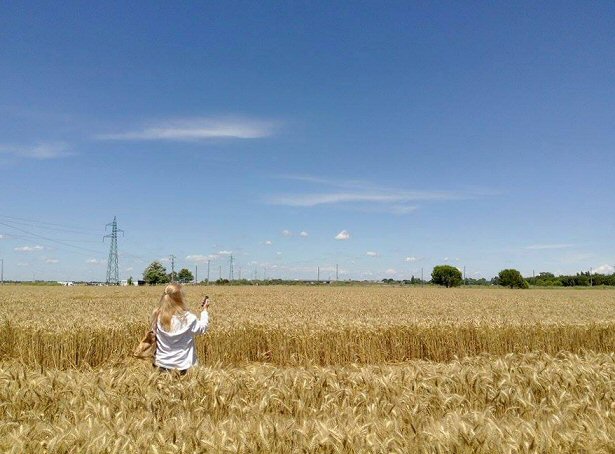 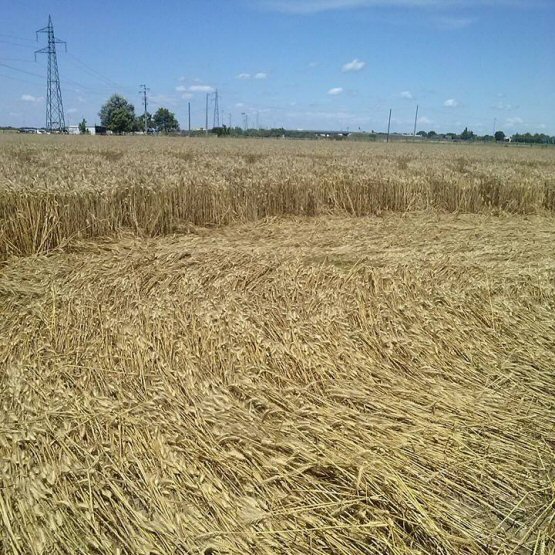 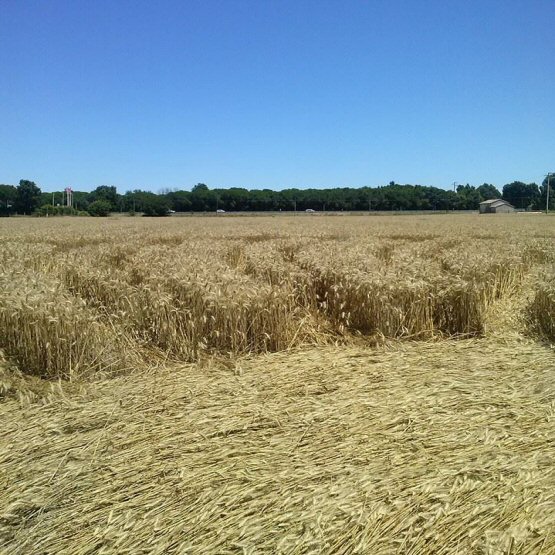 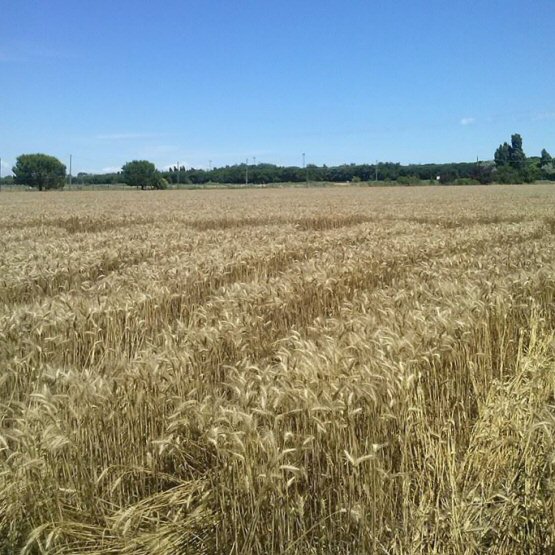 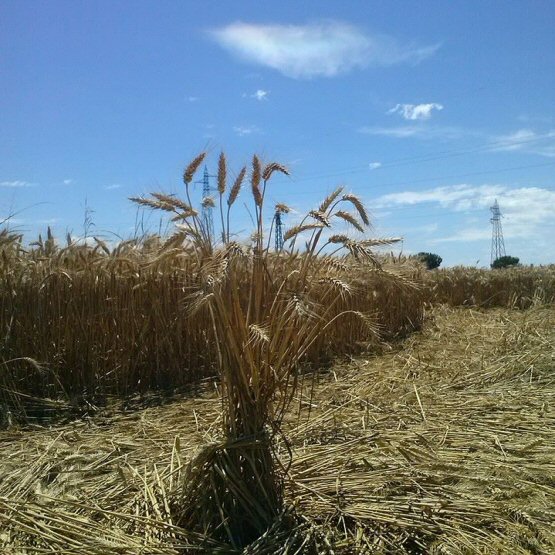 The interior of the crop circle with an iridescent cloud above it. Picture © Marina Sassi. 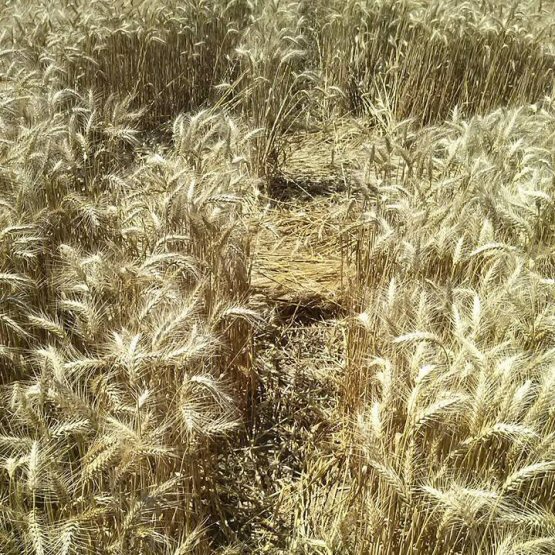 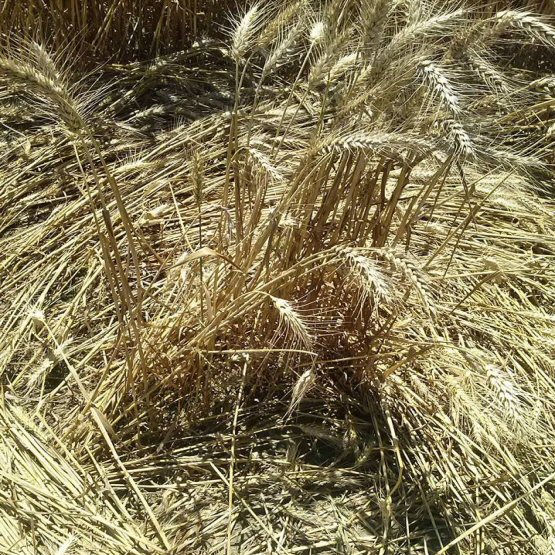 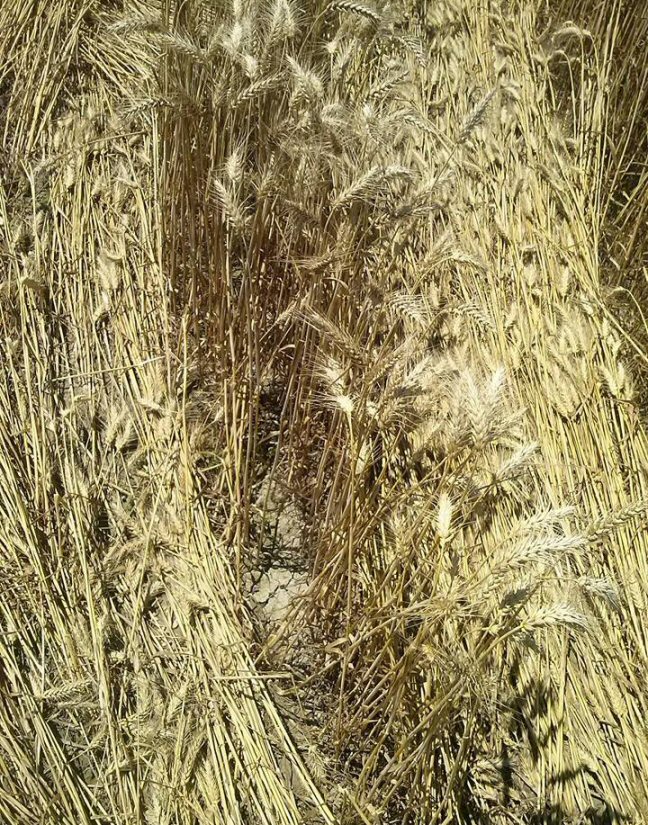 Close up of a small “file” or “image”. Picture © Marina Sassi.