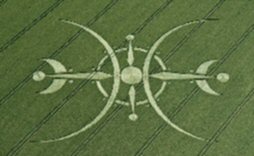 Clearbury Ring, Nunton. The Clearbury Ring formation can be considered the third of a serie of crop circles  that have similar elements to it. So similar that one would easily mix them up. The two earlier ones came both in the month before this one. First, there was the formation at Newton Barrow near Stoford. […]