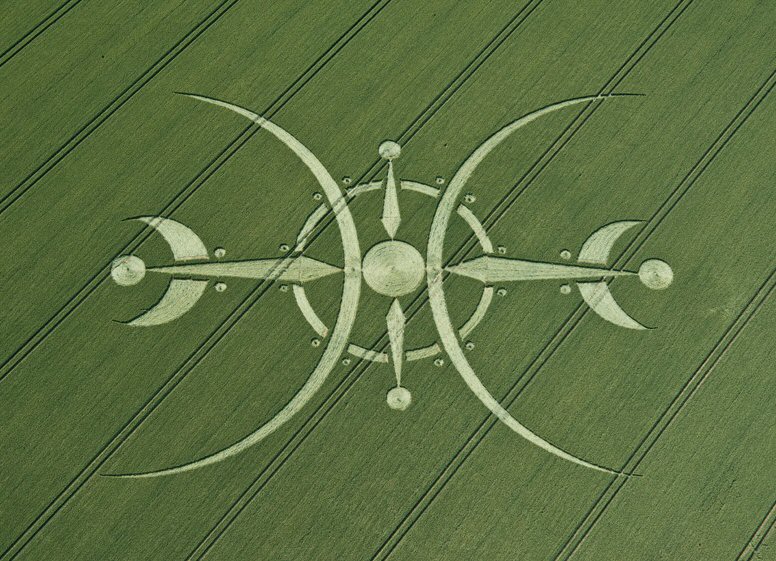 The Clearbury Ring formation can be considered the third of a serie of crop circles  that have similar elements to it. So similar that one would easily mix them up. The two earlier ones came both in the month before this one.

First, there was the formation at Newton Barrow near Stoford. It was reported on June 15th. Its location was near two telecom masts which gave away the first clue to interpretation. The second formation was at a place called “Luxenborough”. It made me immediately google its date of report, June 24 2015, in combination with “Luxembourg”, the European country. It turned out a hit! Already on the first page the two dates June 15 and June 24 were mentioned together to refer to important breakthroughs in the design of new European legislation concerning data protection rules. 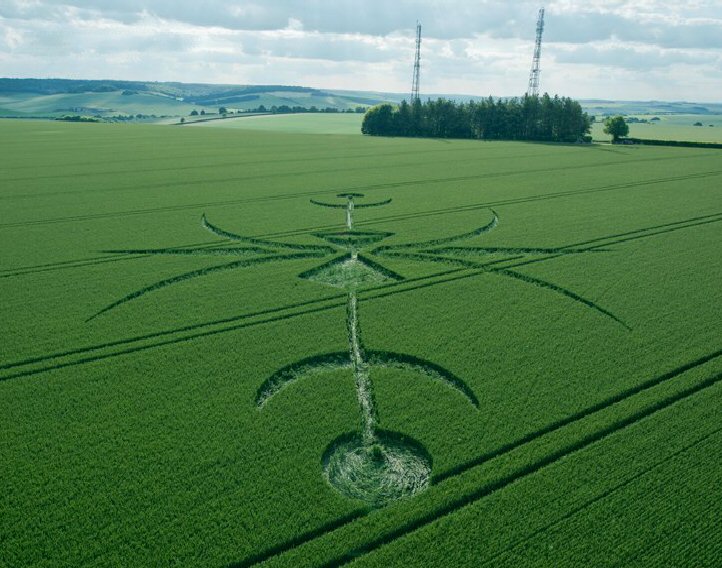 On June 15th 2015 the EU council had found a compromise after more than three years of negotiations concerning the matter. According their press release: “The Council reached a general approach on the general data protection regulation that establishes rules adapted to the digital era. The twin  aims of this regulation are to enhance the level of personal data protection for individuals and to increase business opportunities in the Digital Single Market.” 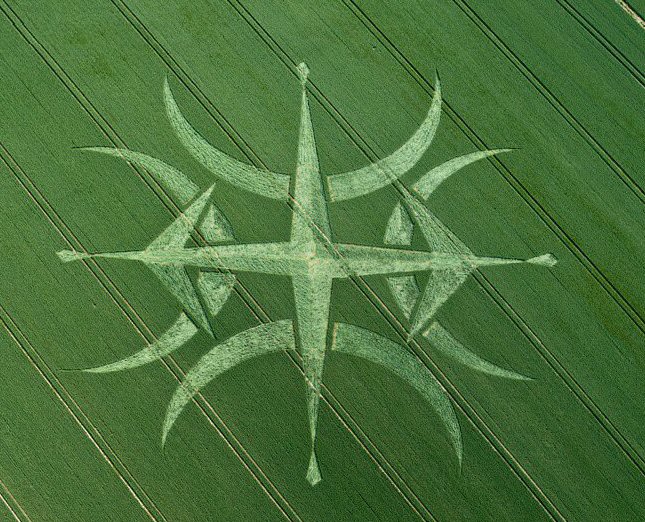 On June 24th the compromise was taken to the EU parliament for further negotiations.

The first two formations seem to refer to the EU data protection legislation by their location and/or dates of appearing. The designs, however, leave us mindboggling. Also, the third formation, (at Clearbury Ring) doesn’t give much away. I checked its date with the EU data legislation activities but without any result.

The only thing I was able to make chocolate of was that this Clearbury Ring formation had a type of grape shots connected to it that I, for good reasons, consider to be depictions of “data points”.

The suggestion of the grape shots depicting data points found its base in my study of the Yarnbury Castle formation of 2010. With an eye peeping through a keyhole as its main features, the formation left no doubt to inform us about the theme of spying. It was only in 2014 the idea came to me that these multiple dots in and around that intriguing formation had to be “data points”. As soon as I realised this, a large data point formation appeared between West Kenneth and Silbury Hill as if it was by means of confirmation… 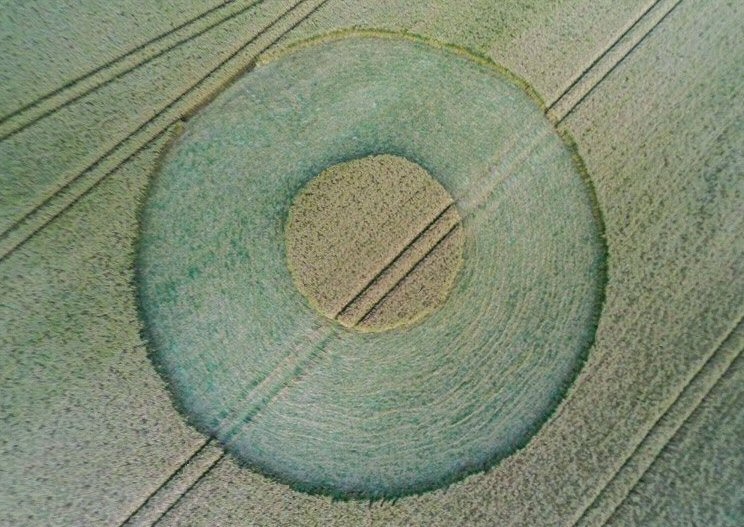 With the likelihood of the grape shots representing data points, while its total impression similar to the Newton Barrow and Luxenborough formations, it seems that also the Clearbury Ring formation has something to do with the data protection theme. In fact, it gets better when I find a press release at Tweakers.net…

Although I can’t help to understand the press release as a practical joke, it concerns an issue of major importance. It tells about an Italian company called “Hackers Team” being hacked themselves. The company in question is said to provide spying software under the name “Da Vinci” to the governments of Luxembourg (!), Germany, Italy, Saudi Arabia and Egypt. Now that the company is hacked, it makes us, after the revelations of Wiki leaks and Edward Snowden, again, wonder about the vulnerability of innocent people against states and powerful companies. The date of the press release about the Hackers Team being hacked was July 6th 2015, the exact same date as the report of the Clearbury Ring formation.

Now that I named Edward Snowden in this story of data protection, it is worthwhile to show another formation. It is designed with, again, the same imagery-elements and curious enough, it was found the very day before Edward would leak enormous amounts of secret NSA data to journalist Glenn Greenwald and documentary maker Laura Poitras. The exchange of information turned out a heroic and historical event that took place in Hong Kong, June 3th of 2013. It seems likely the source of this East Field formation was aware of the Snowden revelations about to happen…! 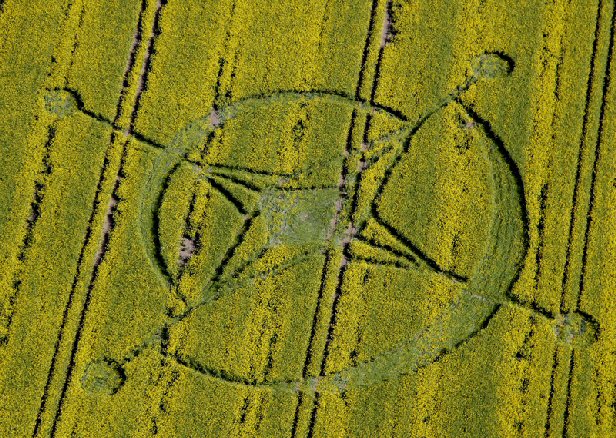 Considering the indications we have pointing to the idea of new EU data protection legislation and the fact that I don’t meet serious alternative options for another interpretation, I continue with the direction of thinking.

Until now, the only imagery elements we recognised in the Clearbury Ring formation are the data points. We are able to find sixteen of them. Maybe two more, hidden in the lay of the large moon crescents. We find small moon crescents and large moon crescents. It seems both types have emanated from one centre. Remembering these similar elements from the Newton Barrow formation close to the telephone masts, I would say they depict reach of signal, or, wireless connection. In other words, we meet Wi-Fi technology. The difference in crescent shapes might tell the difference between bandwidth? (20 or 40 MHz)

When I search for a variety of Wi-Fi icons, I get overwhelmed by the many of them. I would distinguish symbols wíth and symbols withóut antennas, although they don’t seem to make real difference in meaning. 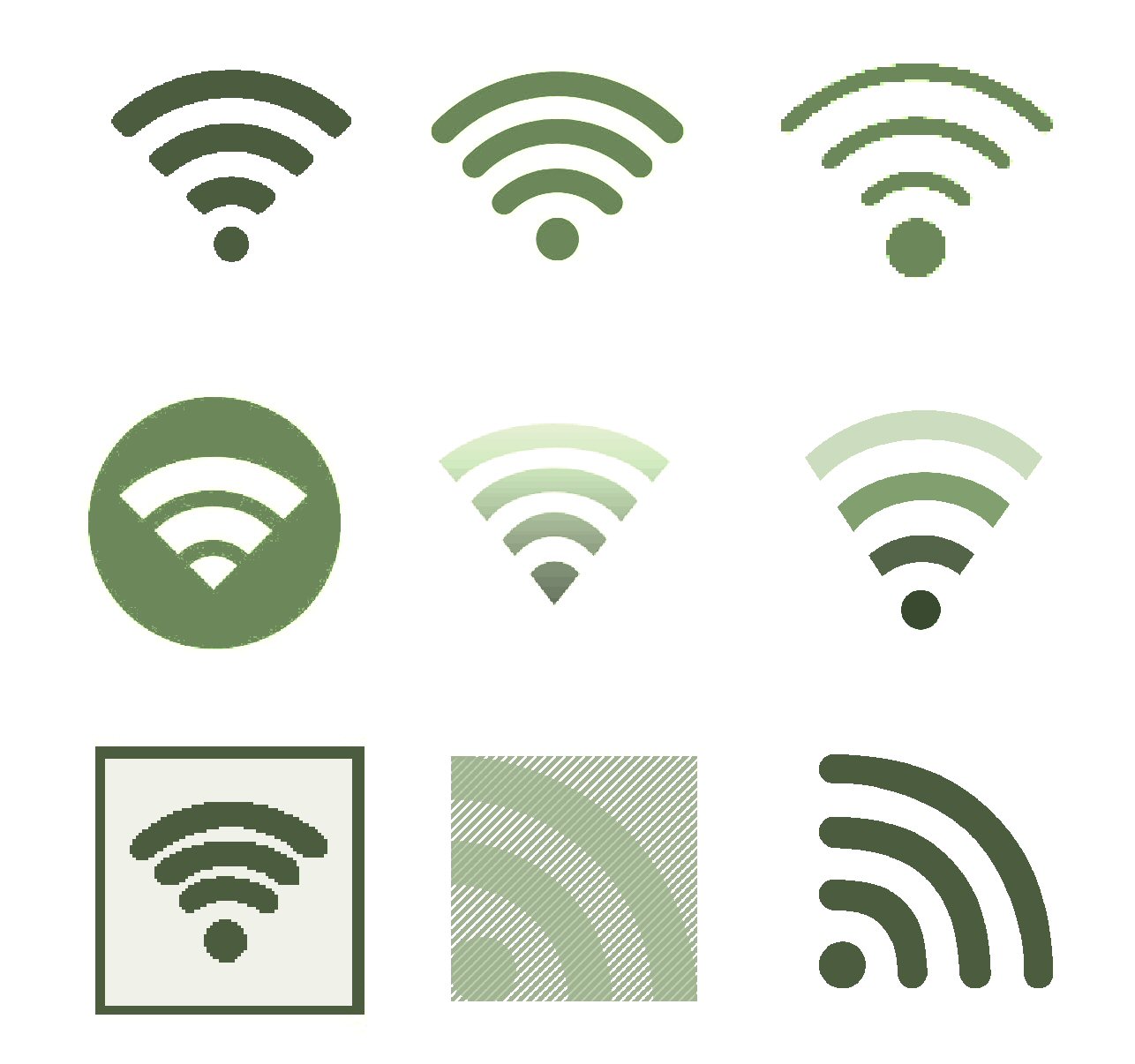 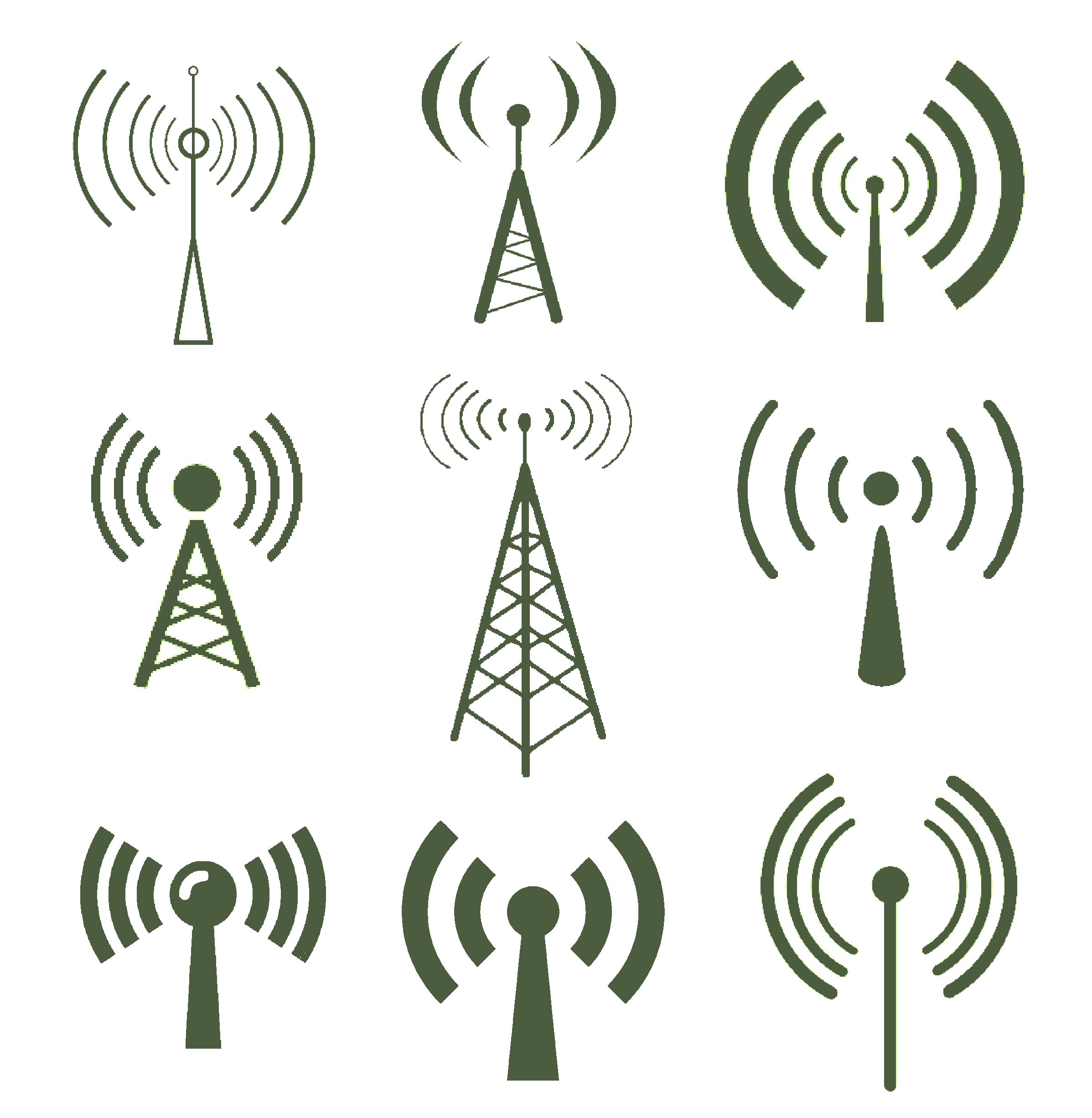 Seeing the symbols with the depiction of antennas it occurs to me that the sharp edged diamond shapes in the formation might as well be an abstraction of such antennas. Would the crop circle designer only have wanted to depict an alternative Wi-Fi icon, it probably would have looked something like this: 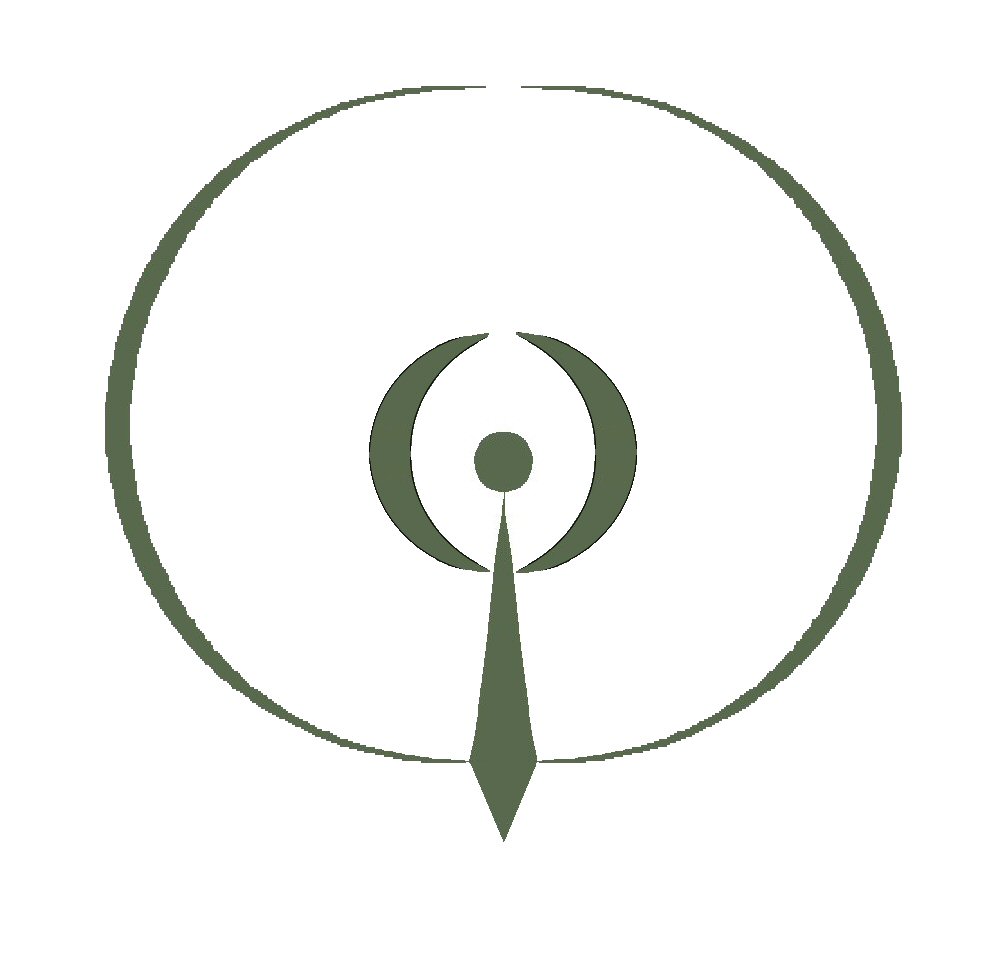 Following the logics as we seem to gain them, the Clearbury Ring formation has four antenna’s to which centres of radiation are added. Two of the four centres seem active as waves are being send away from them. The other two, depicted a little smaller, seem not to be  active. 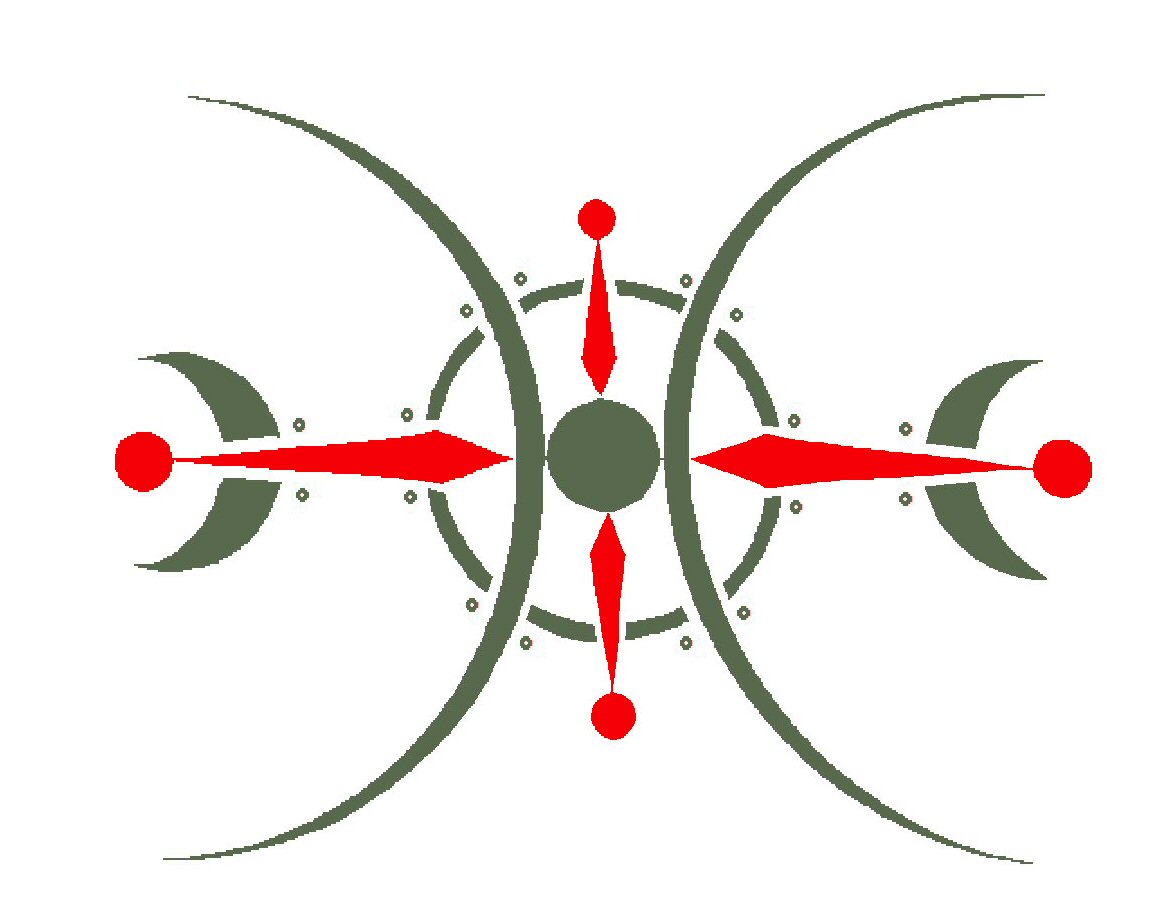 What else could it express than “to radiate or to not radiate?” 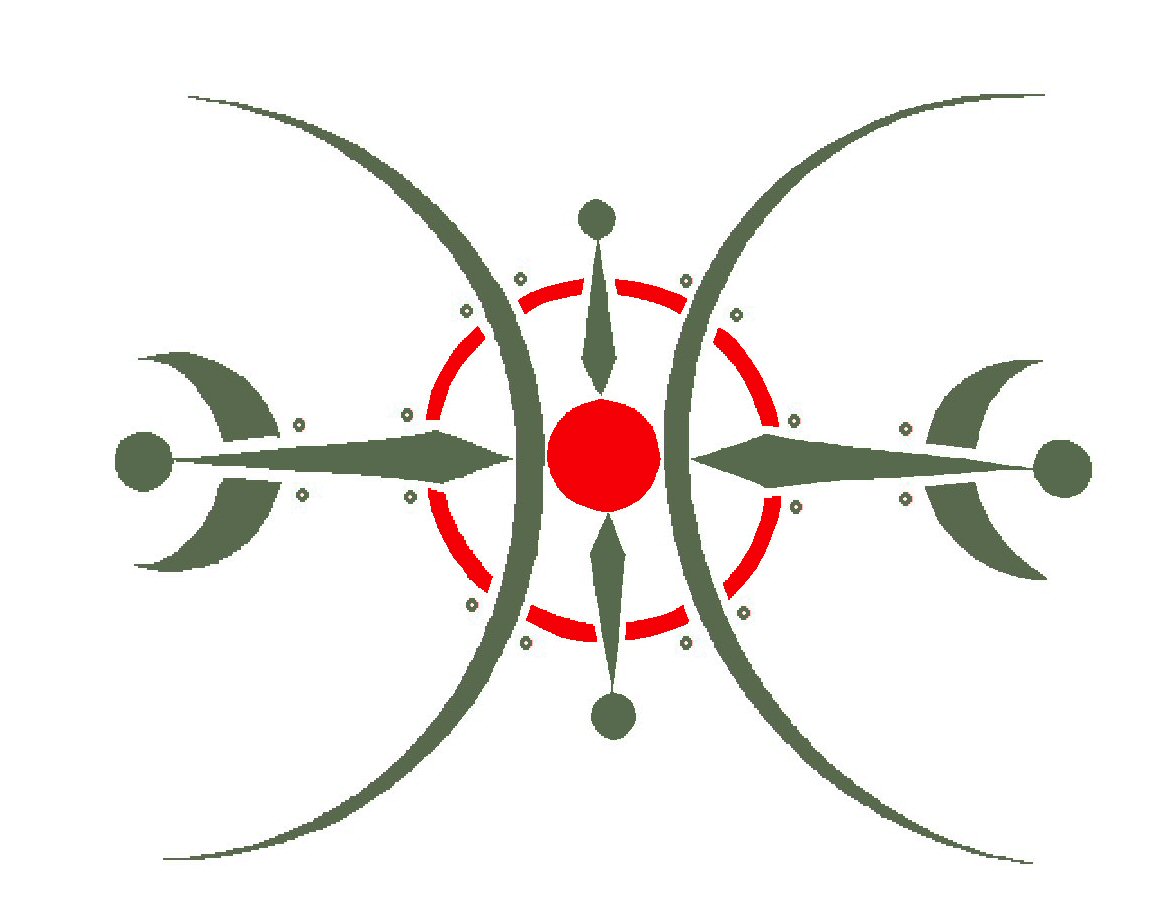 From under the antennas, with or without their radiation, there appears a ring that seems to bind the four together. The ring has a large centre from which the antennas spring. The idea of a centre with a unifying ring in the context of telecommunication masts easily brings us, again, back to the EU legislation about data traffic. We may also think of other bonds in this branch of modern techno business. For example; the military industrial complex has facilitated the expansion of all this wireless electro-technology. If we find it hard to recognise the logo of NATO in this particular design, in some of the accompanying designs it is already more significant.

The Winterbourne Stoke formation was found on July 10th 2015, close to the Stonehenge information centre. Also the Luxenborough formation of June 24, 2015 was positioned in the nearness of Stonehenge.

Another option for explaining the unifying ring could perhaps lay in, who knows, a gentleman’s agreement between mighty telecom companies? Maybe the best solution to begin to solve the mystery of the ring, would be to consider it the “Clearbury Ring” itself. The Clearbury ring is one of Britains many hill forts which were military bases used for protection in matters of war. The name might as well tell us that this ring of unity has buried clarity. In that respect, I wonder if the proposal for regulation that went to the EU parliament shows any symptoms the like. The document can be found here: http://data.consilium.europa.eu/doc/document/ST-9565-2015-INIT/en/pdf . All I know is that I don’t have much patience to study the bulk of clarity, but the lovely hill fort can easily be considered a metaphor for the European data protection construct.

The overall impression of the formation that came to me can be characterized with one term, namely “commitment”. The very idea bounces back to many levels of human involvement. Talking about bouncing back, I find it interesting to see the waves turning back to the source of the four antennas. In the light of the military-involvement-option, something similar happens. People have associated parts of the design with rockets (defence?). Also these rockets seem to be directed against their own original source. Whether we see rockets or harming electrical frequency waves, a possible warning may be intended, here? 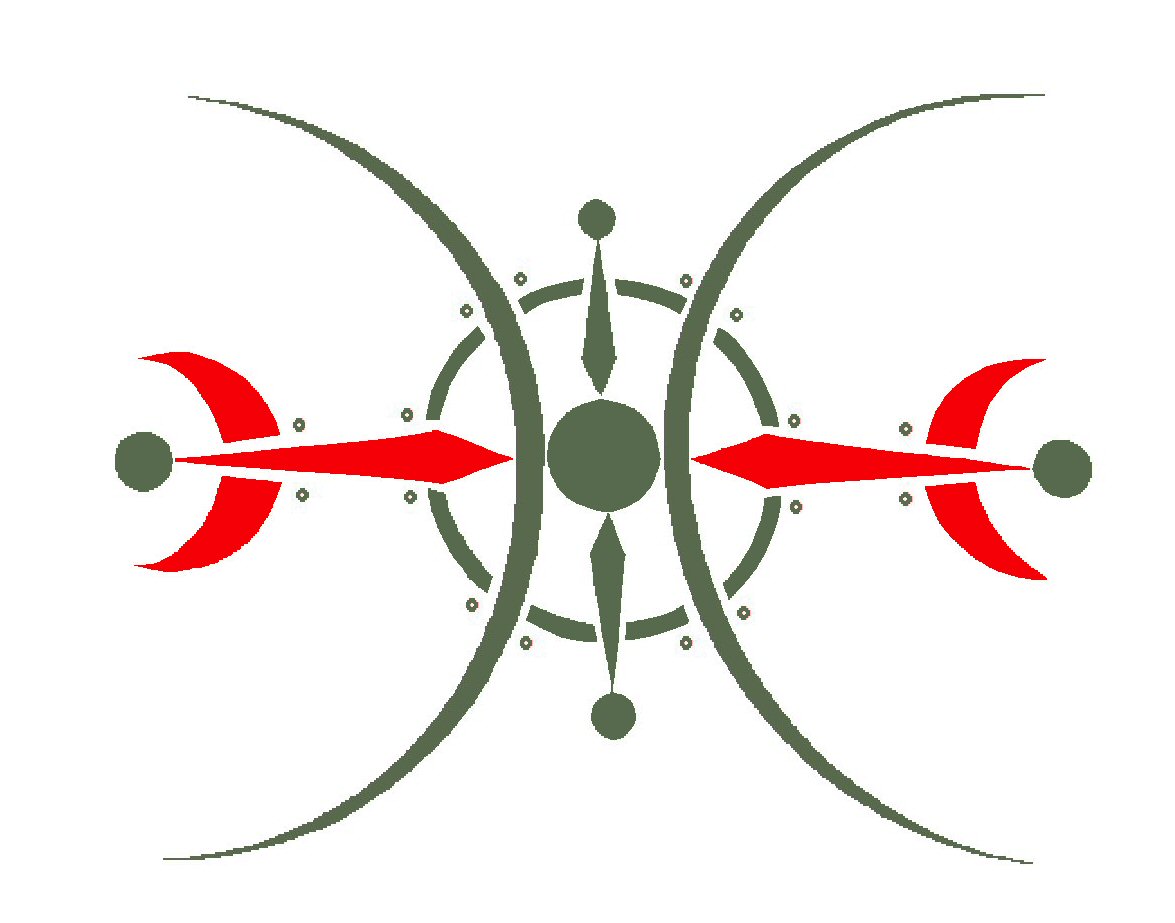 About the levels of human involvement, it can be said that supposed military involvement is just one aspect in the fabric of EU regulation. It will be obvious that mighty distributors of technology have committed, and will commit themselves to the military complex as well as to European politics. Of course, European politicians commit themselves to all sorts of clients. Seeing this, how will the proposal for legislation, still in the stage of design, be able to protect all citizens as intended?

We now days see how big market players manage to overshadow nearly all aspects of human society. We also notice how the masses commit themselves to all sorts of technological novelties without much scrupulous. Even now we have seen how, for example, Google and Facebook turned out best friends with police state agencies, handing over all our private data to them, the public still commits itself to these creeps. Would you ask the same public if they like it that way, the uppermost will probably say no. It is this schizophrenic tendency that can be observed in many other fields of our running society, which makes things harder and harder.

Let us hope that the European Parliament will come to wise legislation concerning wireless data traffic and/or data traffic and its protection in general. It is certainly not an easy task. 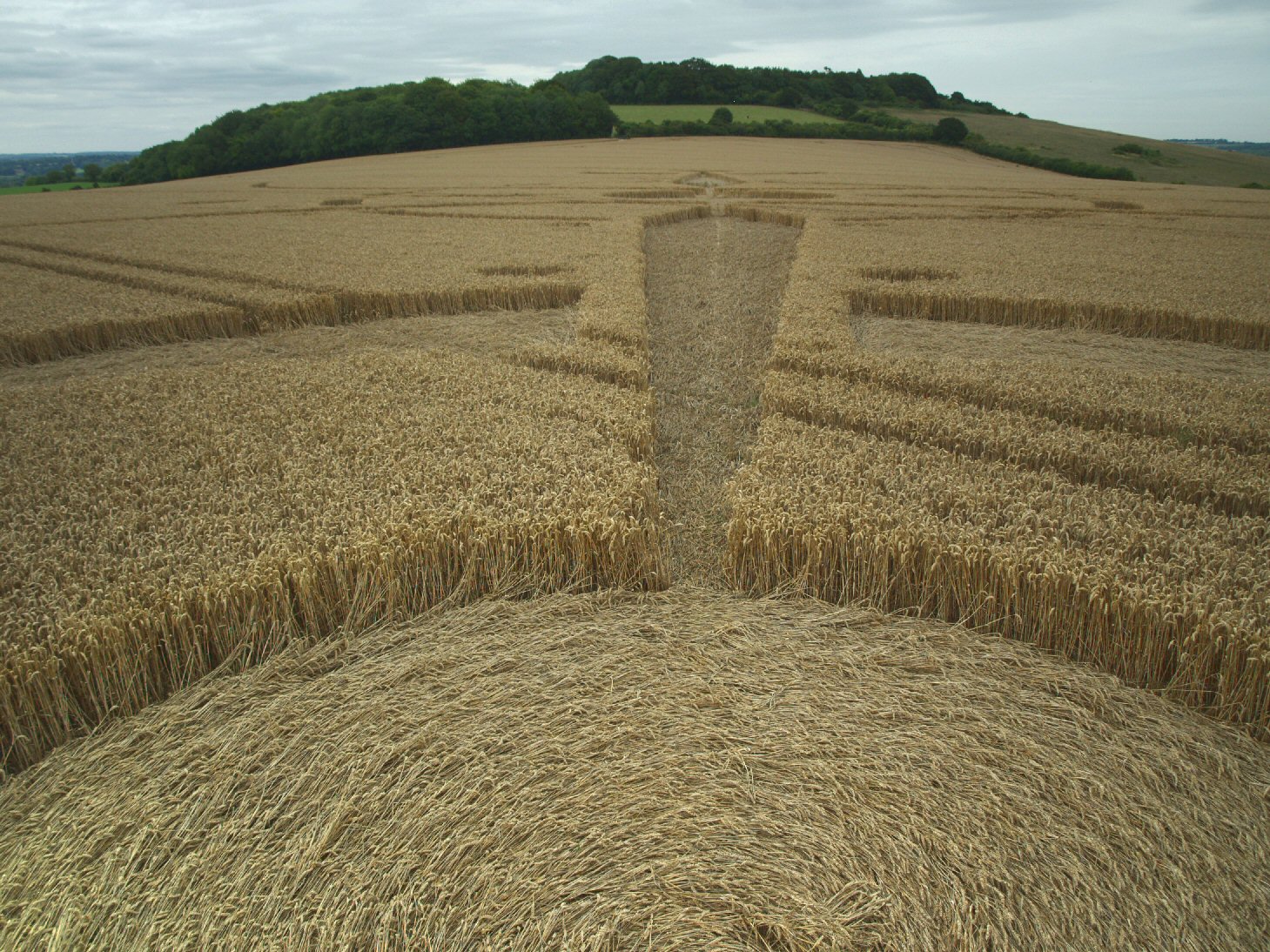 The Clearbury Ring at the background.

Although I conclude the Clearbury Ring formation speaks about data protection rules/laws being made in the European Union, it isn’t said that other related themes are excluded. Items such as electro-smog or the use of wireless communication technology for population control, seem to me being part of the story too.

Also a strange telepathic message of unknown source reached me after having done this Clearbury Ring crop circle study until here. It gave me the hint “radium two”. Initially I started thinking that the message would inform me about the chemical element Radium. It is a radioactive element that was often used in watches for its fosforescend quality. Additional messages like this happen sometimes after I think I have finished a study. They tell me to be of supplementary value. Or major value. In this case it turned out that an artist named BlackVariant had designed an icon in the category “Wi-Fi”. He had given his icon the name “Radium 2″. 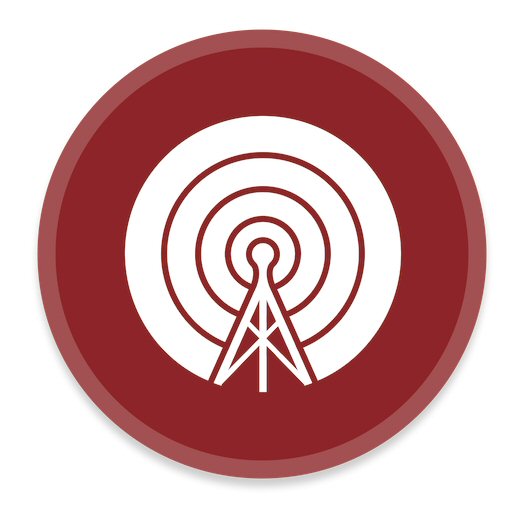 When I tried to contact BlackVariant I had to subscribe to Deviantart, an online social network for artists and art enthusiasts. Of course, after three times refusal of a name I wanted to use, I cancelled my attempt. Maybe this type of barriers are already symptomatic for the difficulties around the subject of a free but protected and regulated internet?

What I like about BlackVariants Radium-2 icon is that he allows free use of it as long as it won’t be for commercial activities. Concerning the design of the icon I can’t see why it would be of more significance than the other icons I had collected before. Perhaps a reason would be that this one expresses more radiation than the others, making it more honest in a way?

The “on and off” suggestion.

I keep on being puzzled with the “on and off suggestion” that we came across when contemplating the centres of radiation of the crop circle design. I like to believe it is questioning the desirability of radiation free zones. I consider such an important human right.

Talking about humans and rights, when I visited the formation together with two beautiful girls from Denmark, we were commanded by the farmer to leave the formation immediately… Luckily, this happened not before having been able to make some stunning pictures. 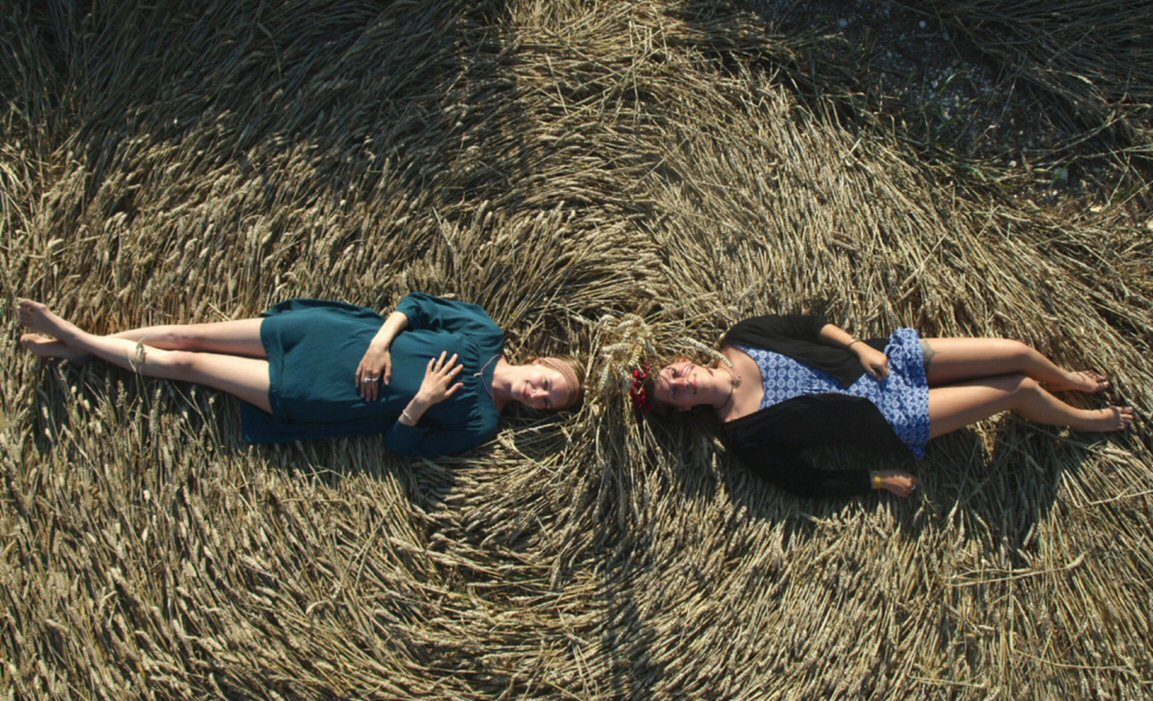 Marie and Sophie from Denmark at their very first crop circle visit. © Randell.

Another idea for interpreting the “on and off suggestion”, is close related as it questions communication as such. The suggestion then speaks of “to communicate or not to communicate”? 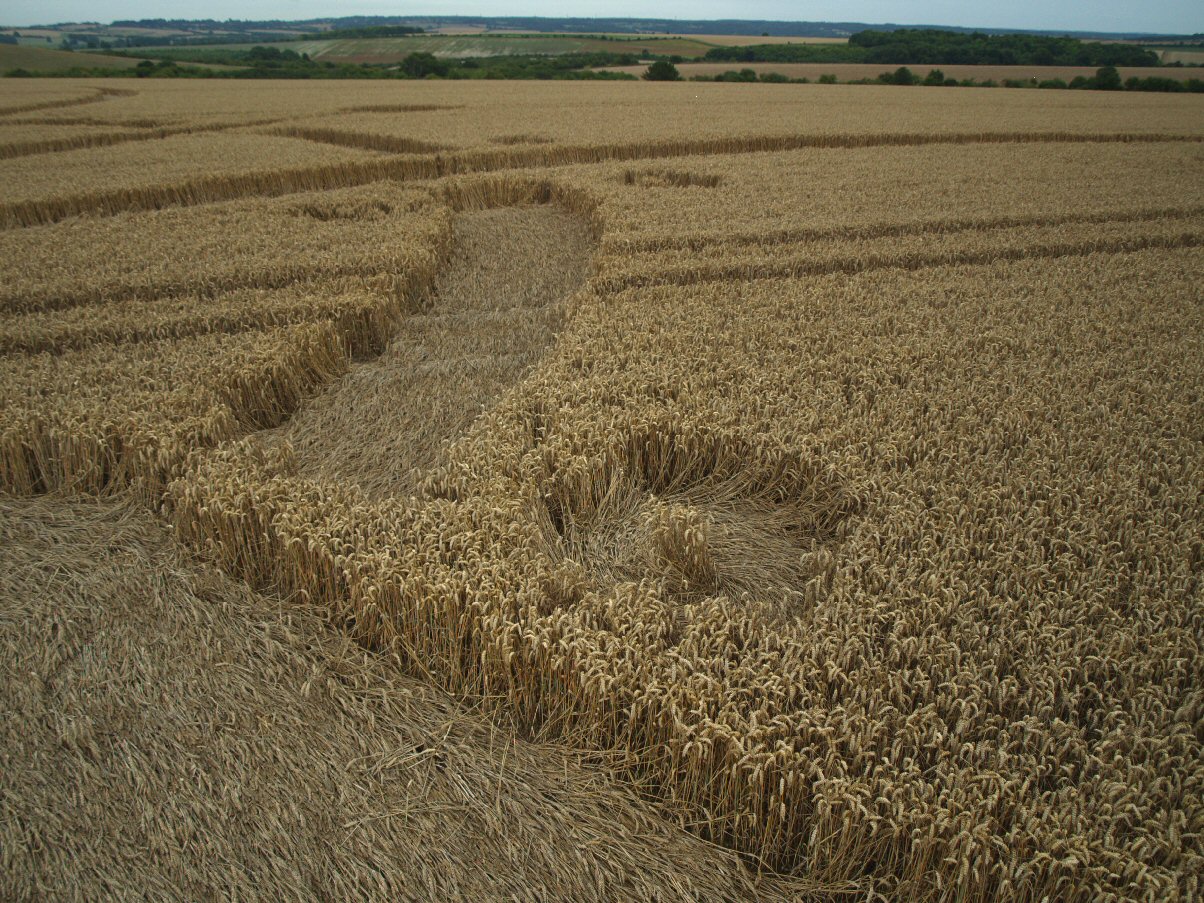 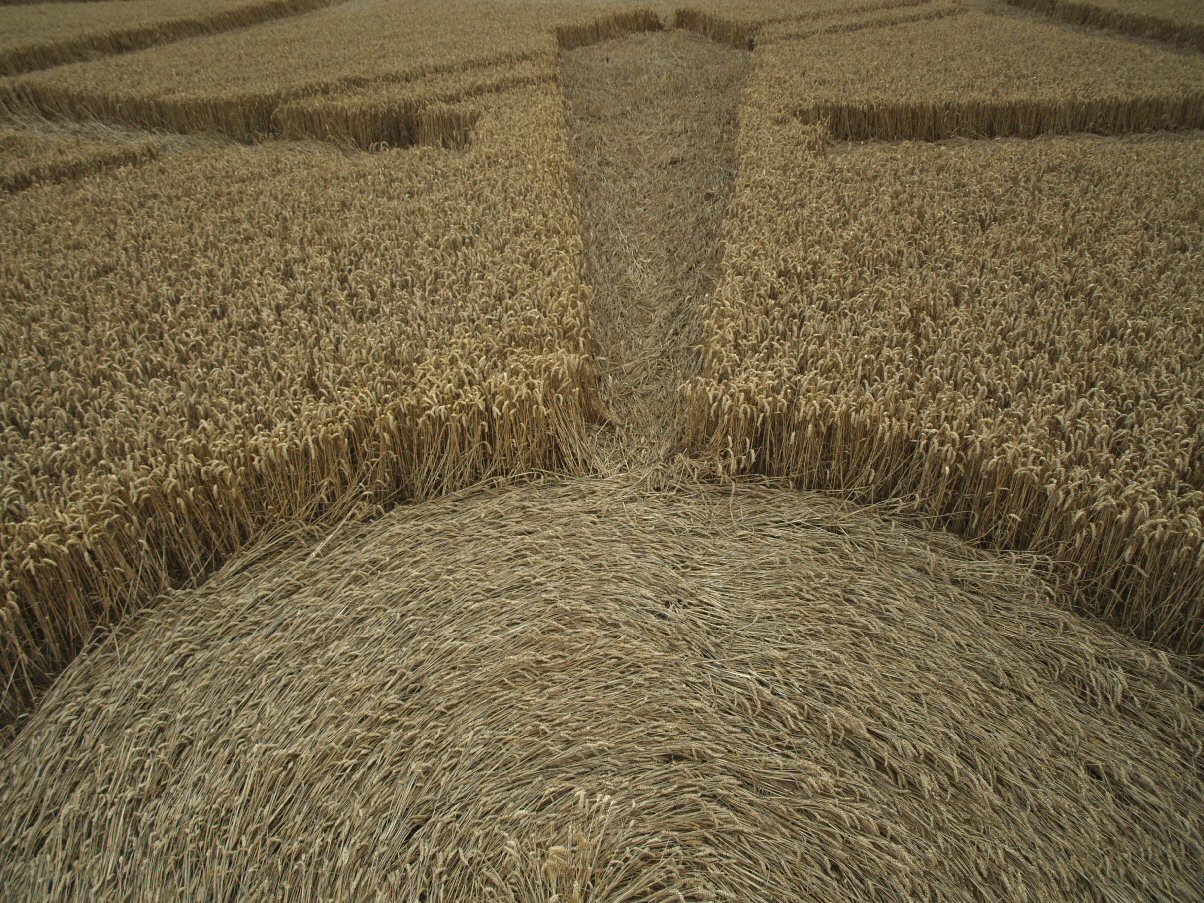 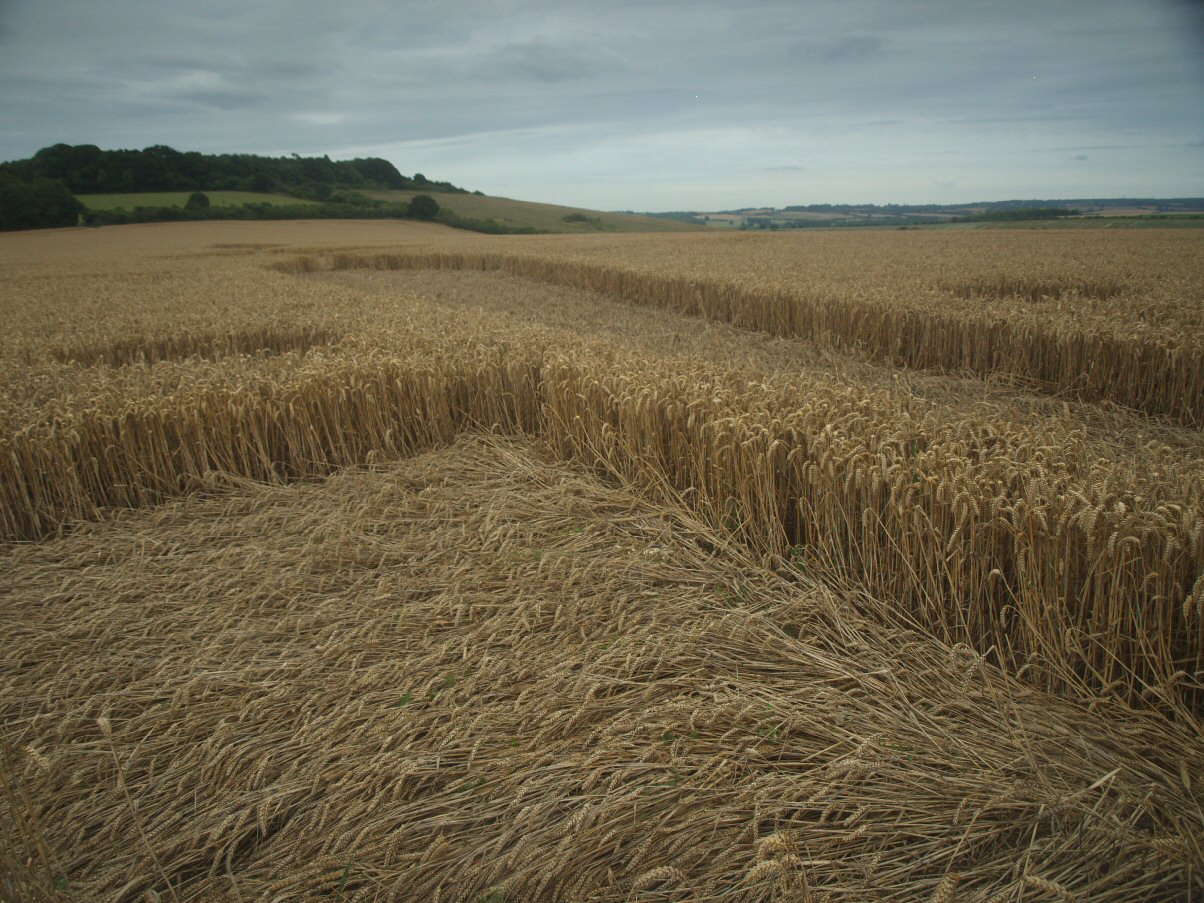 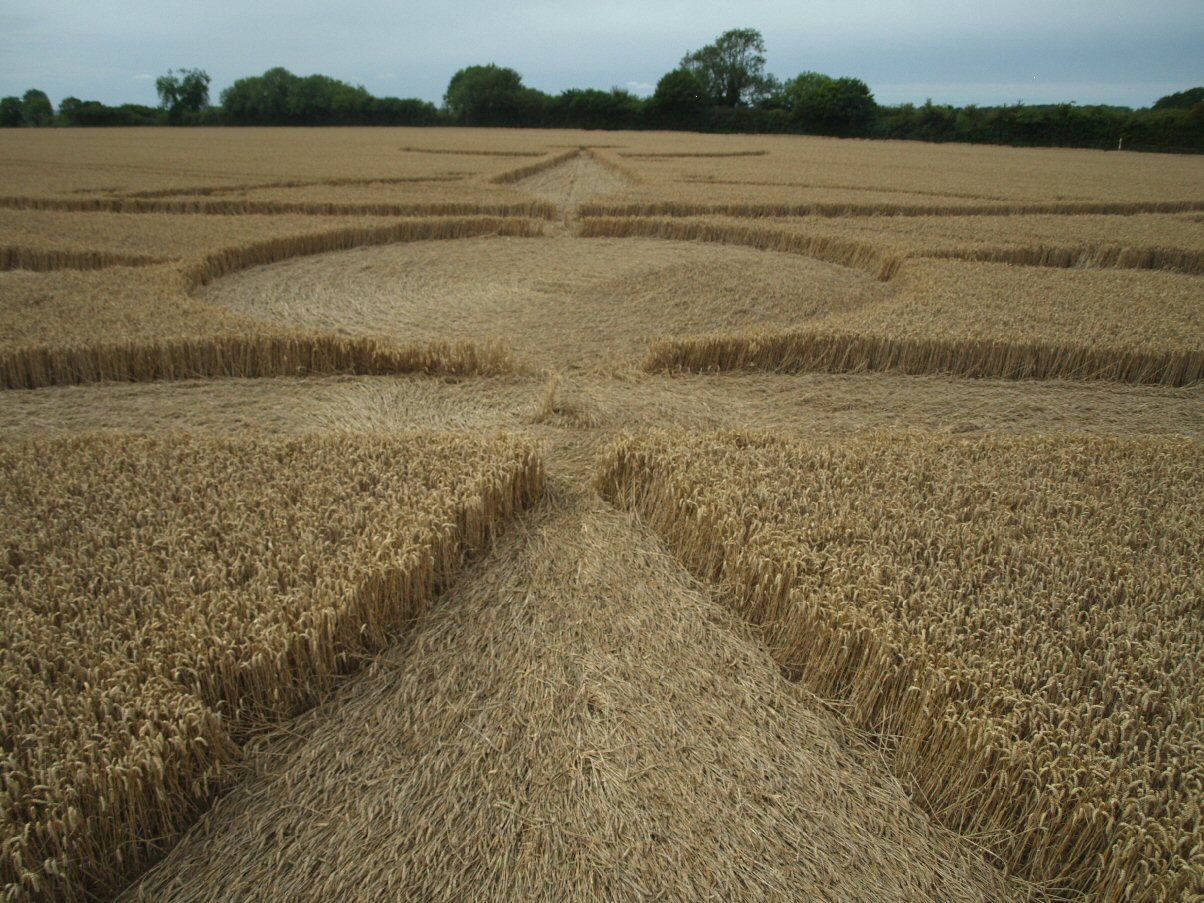