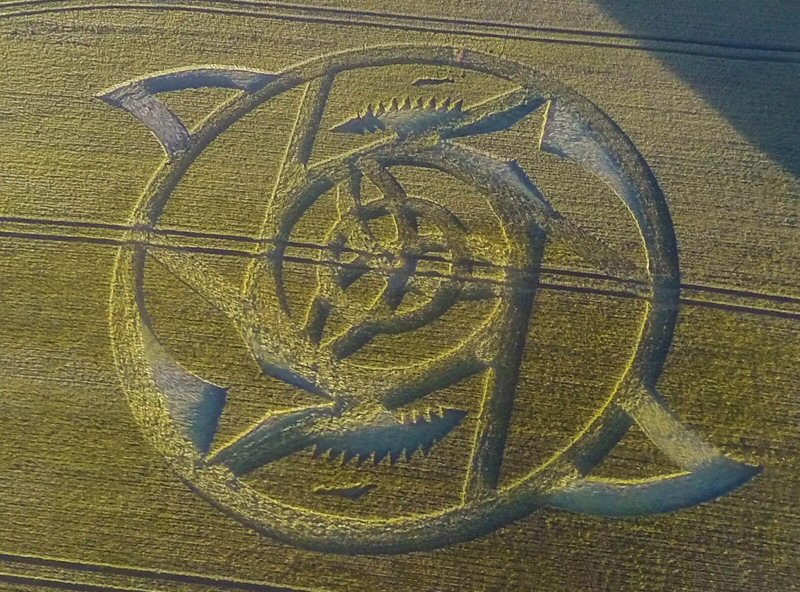 The day before Britain would vote itself out of the European Union, this formation appeared. For a crop circle, the depiction is pretty clear. We see two sharks circling around a triquetra or Celtic triangle. The triquetra is said to represent life, death and rebirth.

One cannot escape the idea this formation links with the already historical event of Brexit. It seems the old Celtic spirit has rejected the European Union. However, the two sharks, whatever they represent, seem very threatening. My first association is that they symbolise the EU and the US.

The design has, according to me, some features that do not please the eye. Confusing is that the sharks are each cut in four sections. Also the triquetra seems to have its outer corners chopped off. When we go back in crop circle history, we can find a more impressive triquetra that was made in two stages in July 2011 at Milk Hill. At its first stage, only the outer corners where visible! I doubt this to be coincidence. At a later stage in July of that year, the triquetra was finished.

Searching on Google for 2011/7 (date of Milk Hill’s triquetra) I immediately found a European directive with almost the same name: 2011/7/EU . It is a late payment directive. It is implemented in reaction to the financial crisis in order to combat late payment in commercial transactions. EU Late Payment Directive

The correspondences between the triquetra crop circles and payment issues I consider strong enough to believe the Ridgeway formation warns us about financial catastrophes as a result of Britain leaving the Union. Varoufakis for example, predicts a faster implementation of TTIP for the UK caused by Brexit. (The guardian, Yanis Varoufakis meets Owen Jones: Varoufakis interviewed befor Brexit. ) 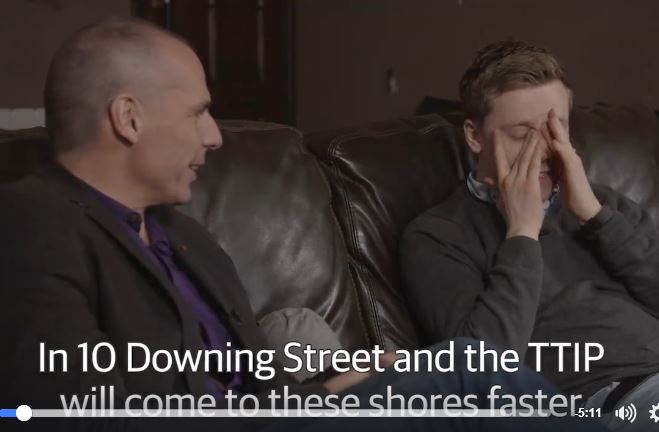 The best I can make of the sharks cut into pieces and the chopped off corners of the triquetra is that it might point to further desintegration of the traditional power structures.

I believe people should consider seemingly good alternatives can easily be worse than what was before because they get misused or hi-jacked by obscure powers. So often, it is in the nature of politics that the man on the street gets manipulated or betrayed over and over again. We have seen people welcoming Obama for president. He turned out just another puppet in charge of Goldman Sachs. We have seen the glorious Arabian springtime ending up in disaster much worse than what was there before. Now, the opportunistic attacks on the financial institutions seem so necessary and lucky that we easily ignore the possebility these are planned stages for new forms of repression. I’m sorry, it is hard.