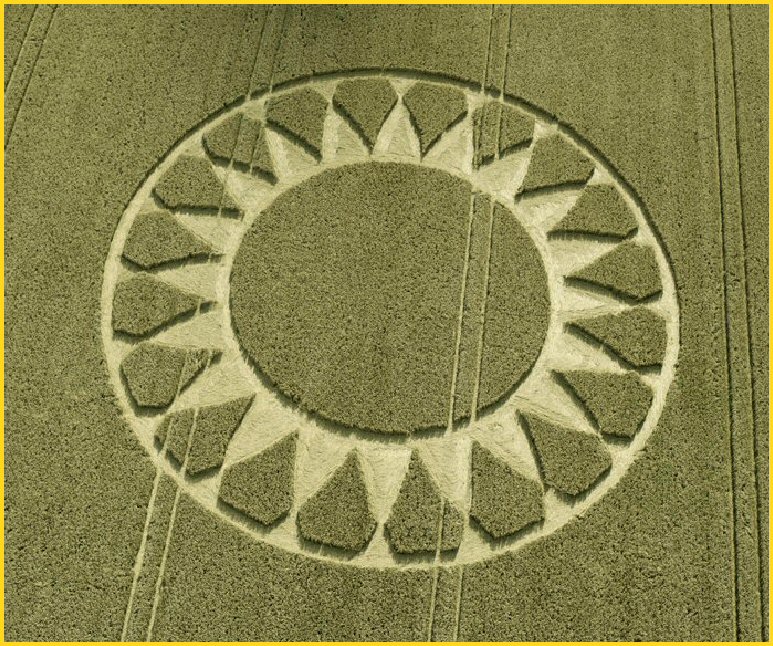 When from the Transology UFO connection I was asked if I knew a crop circle relating to the corona virus, I started looking in my crop circle file for such a formation.

In addition to a number of, at first sight less convincing formations, I came across the Cley Hill formation from the end of July in 2016. In the formation one can, with just a little imagination, recognize the top view of a crown (corona) and at the same time the model of the virus. It does not necessarily represent the corona virus, but thought more universally; any virus with a crown or wreath-like covering.

Starting from the idea that the formation actually does represent a virus, the number 20, derived from the number of so-called “spikes”, becomes evident. With the Corona outbreak in Europe that took place in the year 2020, we can easily bring this number home. On the other hand, there’s the official name “Corvid 19” for this virus while 19 is of course not 20…

At the time of writing (April 2020), there is already fear of a second outbreak of the virus in the autumn, as is often the case with normal flu. Maybe the mutation will be given the name “Covid 20” and could the crop circle refer to that?

Since the name of the site and/or the date of appearance of a crop circle can often help us to find clues, I started searching for information based on 2016 7 30, (the date of discovery). The date together with the search term “World Health Organisation” immediately turned to a first WHO document on the dengue virus that was published the day before the discovery of the crop formation. 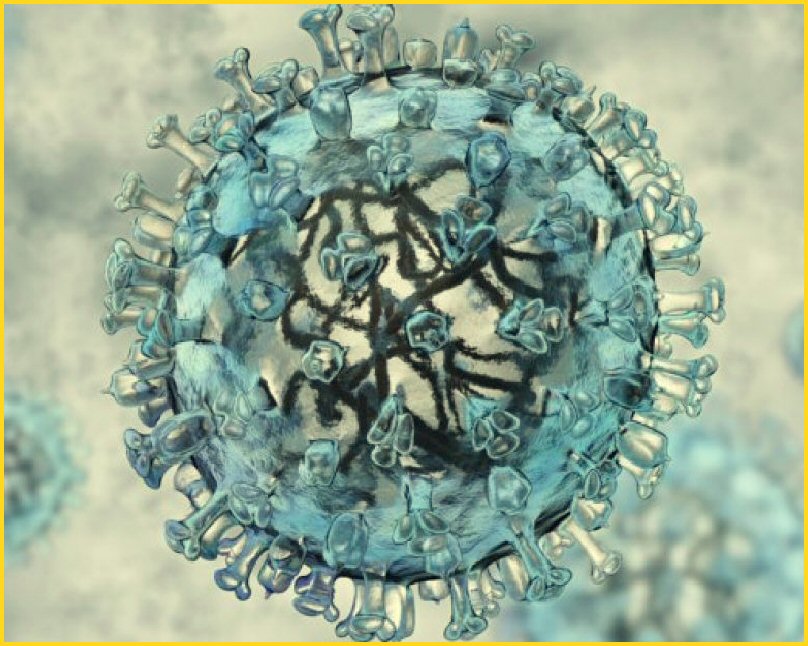 Further deepening in the dengue virus thought me that it expands 20 percent upon entry into the human body. So, here is a number 20. Even in the crop circle design, (although a different kind of expansion is meant), the 20 picture elements seem to expand until a limit (in width) is reached. As a matter of course, the limit reached in expansion tells us something about immunity.

Asian Scientist Magazine (Apr. 6, 2017) – According to a study published in Nature Communications, the dengue virus expands by 20 percent when it enters the human body. This expansion reveals weak points on the virus structure which could be targeted by new therapies.

Furthermore, about number 20, it can be said that it pre-eminently represents abortion. The number 2 can then be understood as a symbol for motherhood and 0 then stands for nothing. Nothing is born, in other words, there is an abortion or a miscarriage.

As for the name of the site of the formation; “Cley Hill” the translation is “clay hill”. To also include the nearby town “Warminster” one can speak of “war cathedral”. Thinking about genetic engineering on viruses and about ancient creation myths in which life forms would have been formed from clay, a clay hill fits nicely into the vaccination theme. Added to this is a church that embodies war as a religious fulfilment. It gives me frightening suspicions that biological warfare in which viruses used as weapons is alluded .

Thinking about the idea of ​​a perfect virus.

In case the crop circle should indeed be interpreted as the depiction of a virus, one might question why it is done in such a beautiful stylistic way instead of a more realistic way? Could the intelligence behind the design want us to ponder about the idea of a perfect virus? Are we facing a perfect illusion? 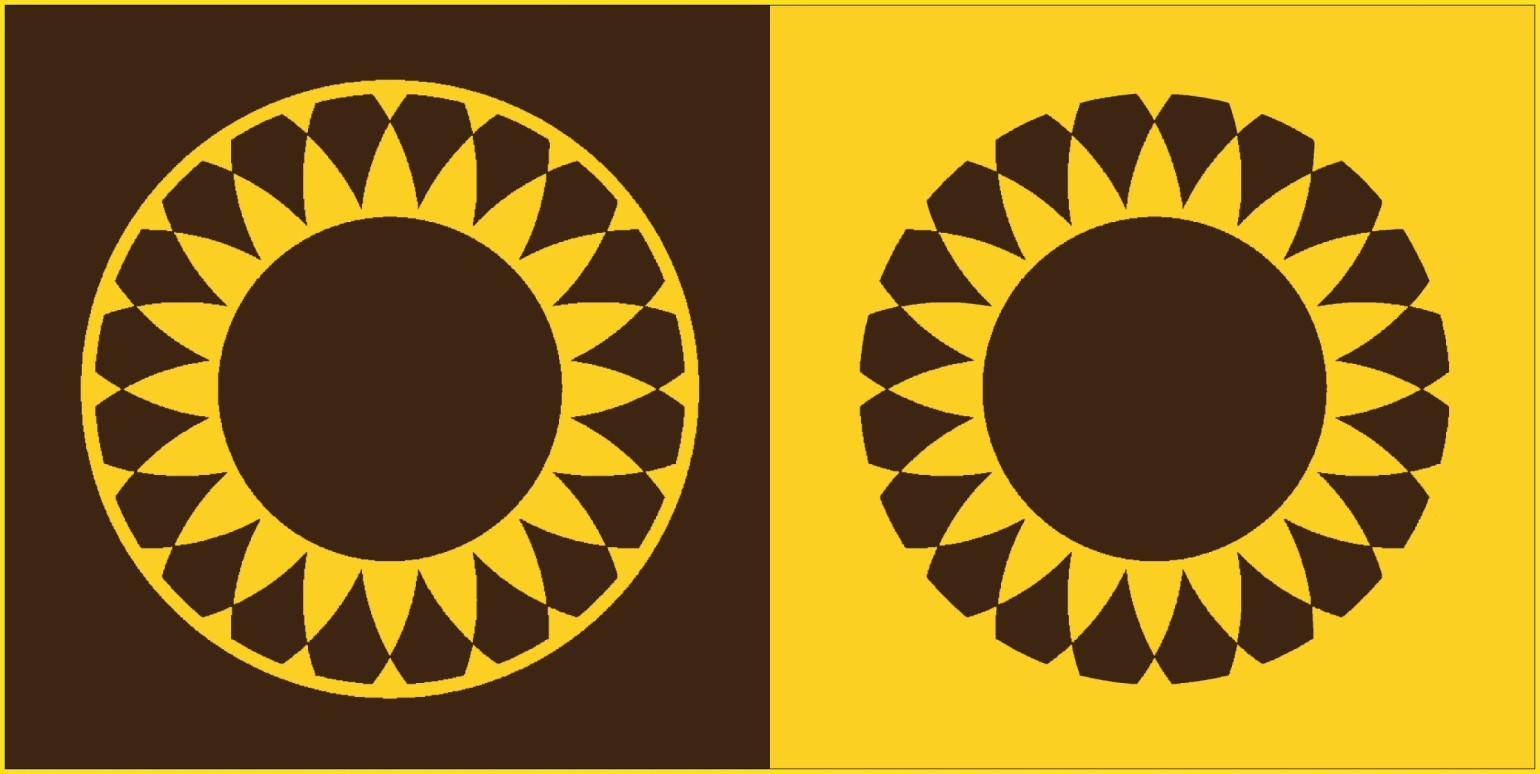 Starting from the idea that we are looking at the presentation of a corona virus, there is a curiosity that deserves attention; the spikes are separate from the core. They are just not connected to it. Thus, the package is cut loose from its protrusions needed to connect with a host. This means that the virus has been stripped of all communication options. In other words, it has been defused. 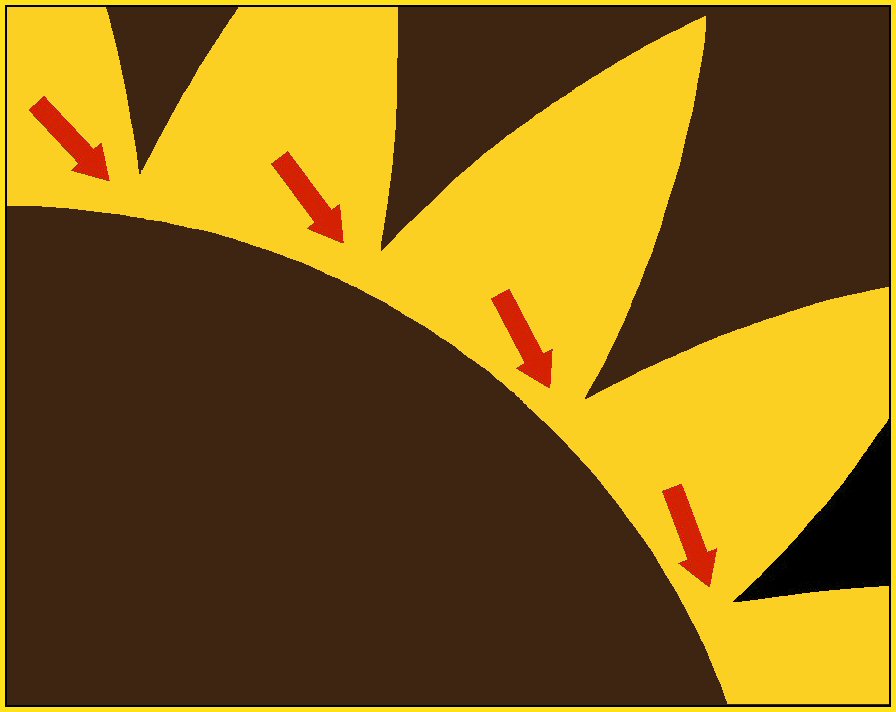 Spikes separate from the core.

If there is a factor that has made the virus harmless, and this can be found in the host, there will be an immunizing factor.

Volkskrant (Dutch main stream news paper) –  A virus is no more than a wrapped string of hereditary material, with the inscription: COPY ME

Don’t confuse them with living things, emphasizes professor of virology Eric Snijder (LUMC). Because they may be made of the same molecular stuff as you and me, without a host they can’t multiply. According to most definitions, that really makes viruses as lifeless as a package of mail.

Now that it is gradually becoming clear that the crop circle depiction it is not so much a perfect virus, but probably an immunizing factor against the corona and / or the perfect virus, it is important to consider how this factor could be introduced and enhanced in the potential victim of the virus. 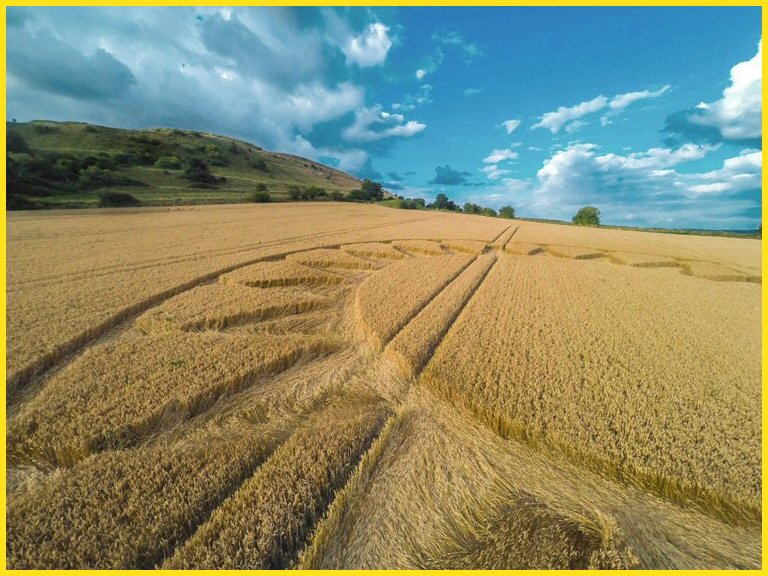 The representation that the crop formation offered in the field showed us, like the vast majority of crop formations, a play of contrasting surfaces. The flattened crop reflects the daylight or direct light of the sun, while the surfaces of the standing crop look much darker due to the shadow effect.

For that reason you could say that a virus has not been shown in a direct manner, but a picture made of spaces around the untouched crop is created. The surfaces that have been flattened are composed in such a way that a virus-like image has emerged from the standing crop. If these flattened illuminating surfaces of flattened crop are now seen as the actual image, then the thought of a form of light arises.

The form of light is related to the dark form that resembles the crowned virus. The light form is in such a relationship to the dark virus that it has robbed its spikes of connection from their common core. In this sense, you could say that light energy that neutralizes a virus is manifesting. 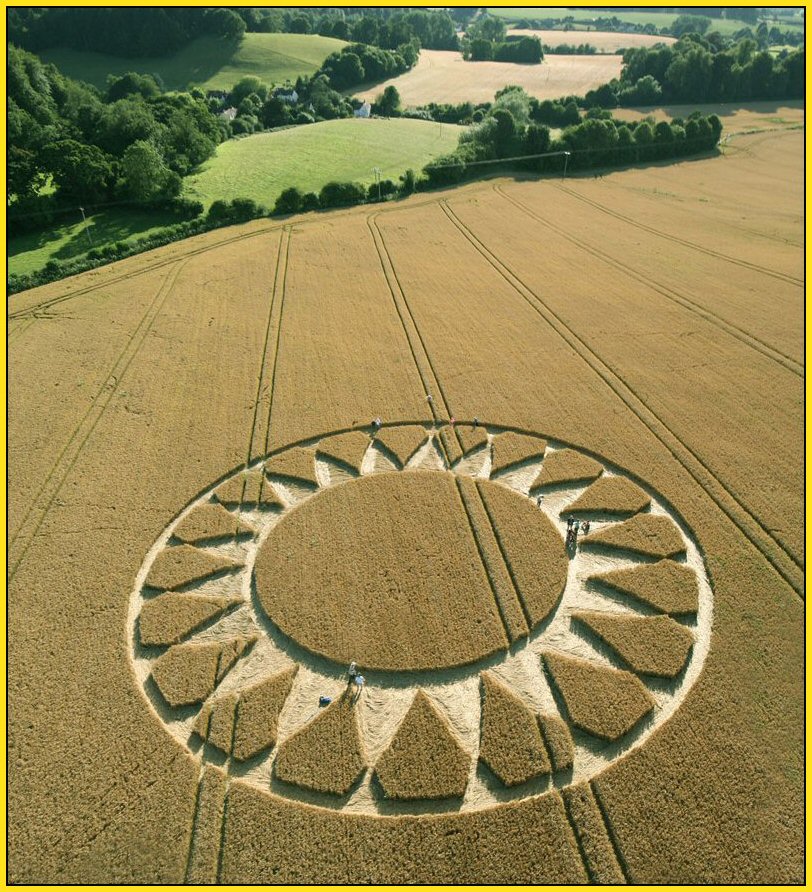 Virus against a surface of light. © Lucy Pringle

The same principle is applicable for the human body. It is possible to visualize this light form in our system. I imagine it becomes especially effective if this visualized light form is inhaled, as it were, and can thus spread in the lungs. Due to its similarity to the virus, it can resonate with viruses present and eliminate these viruses there.

Although, in my view, no clear message can be derived from the formation, it certainly seems to point to the theme of “virology”. If there is any doubt about this, the following two formations can possibly remove them. 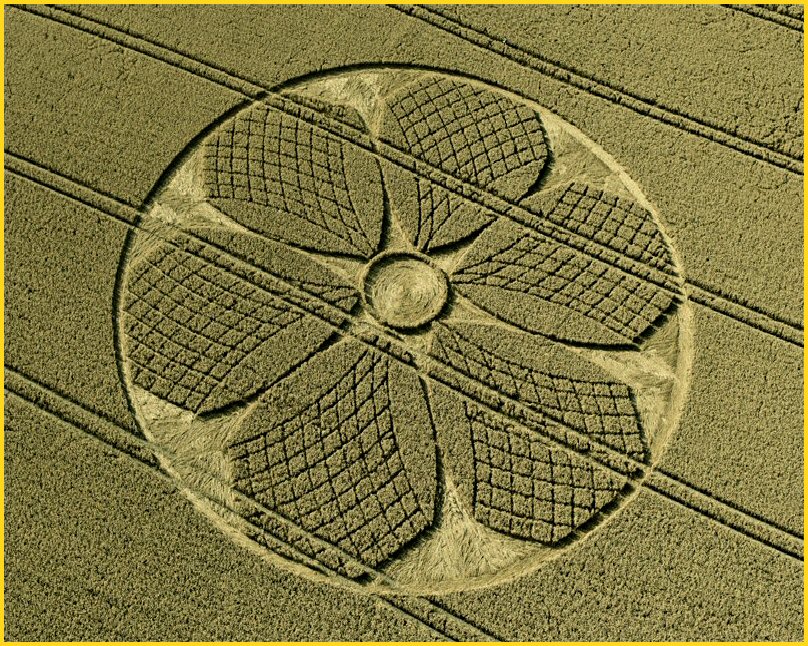 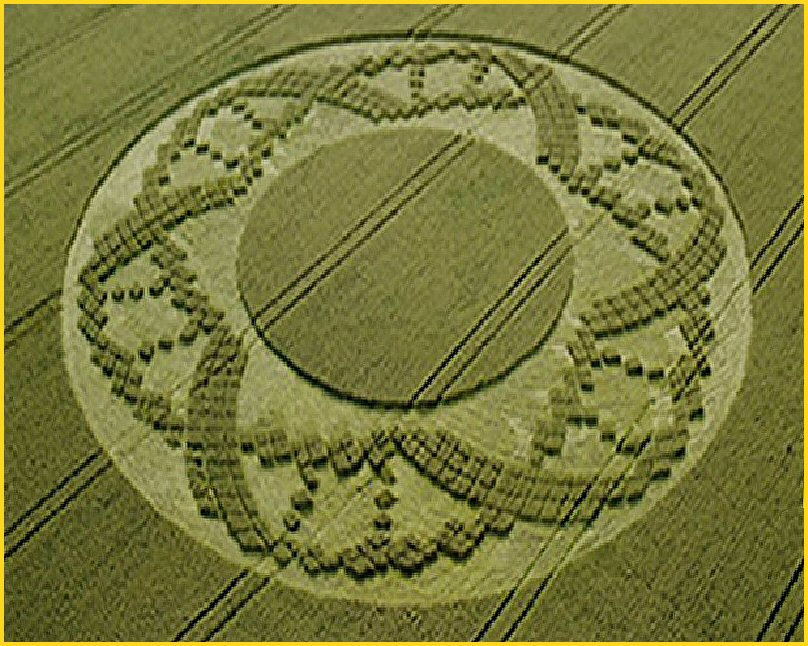