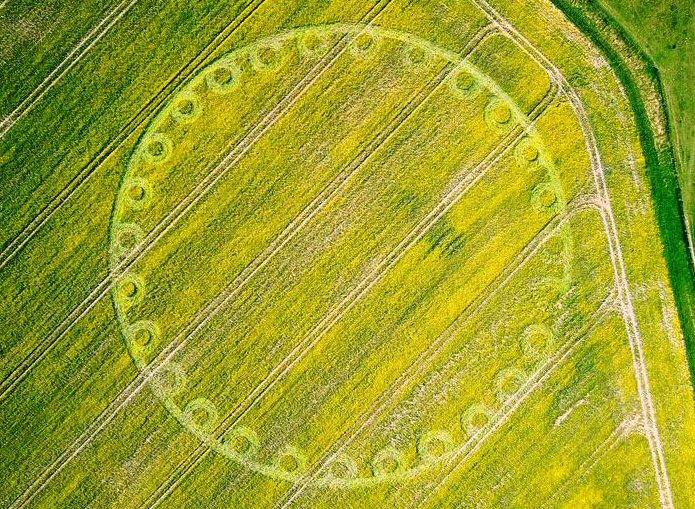 The formation in flowering rape seed reminds me to some discoveries I made about another rape seed formation that formed in May 2010 at Yarnbury Castle. The formation I’m referring to represents an eye in a keyhole, so, is obviously about spying. I had a long hard time to figure out what all these grape shots in and surrounding the keyhole meant, until I concentrated on some details. 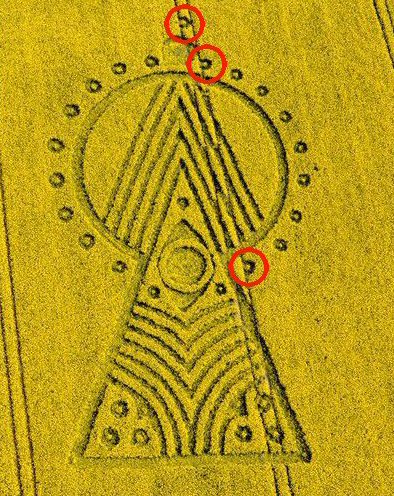 I had been contemplating in particular over three grape shots that were added to, or intersected by tramlines in a remarkable way. As the slide illustrates these grape shots seem for their completion to be cut off by the tramline.

When I tried to visualize the situation at ground level (I haven’t been there physically) I imagined there would be an imprint of the profile of a tractors tire. That’s how it occurred to me that we could speak of “profile”. The strange line patterns in the formation also form something we can call a profile.

It is exactly the grape shots that represent data points.

In the digital world of computing profiles are formed by collections of data points. It is exactly the grape shots that represent data points. It all turns out very logically in the context of modern spying.

The 2017 Olivers Castle formation seem to be a collection of twenty-seven data points added to the inside of edge of a wide circle. Thinking about the number twenty seven I began to associate with the member states of the European Union. Significant to the UK’s brexit is it will leave the EU with only twenty-seven instead of twenty-eight countries as member. If each country represents a data point, one can question how Europe will profile itself without the UK? Or, considering practices of internet spying, how will the UK profile Europe now it withdraws?

It was only on March 29 2017 that Theresa May officially activated the procedures for UK’s withdrawal out of Europe. For those that like to see a calendar in the formation, from March 29 to April 24 is exactly twenty-seven days!