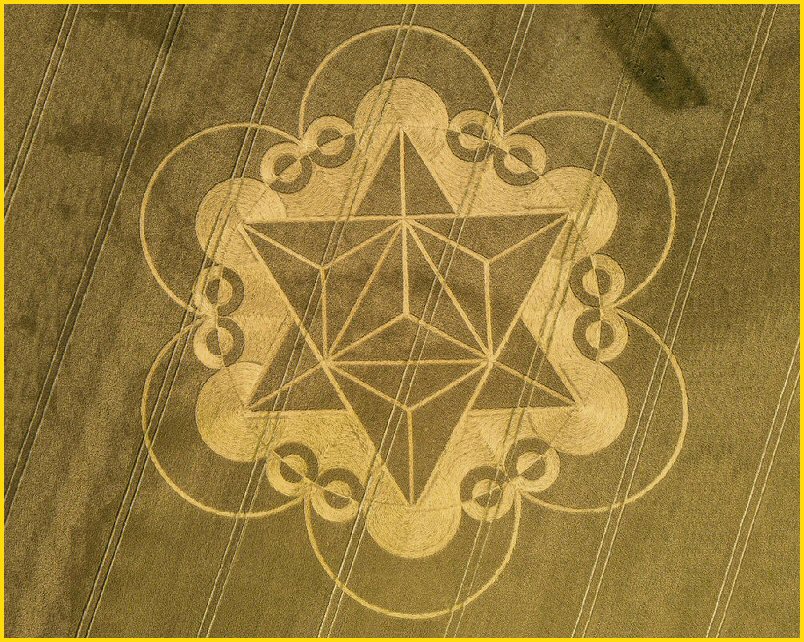 Sometimes one needs to stare a relatively long time at a formation in order to be able to penetrate to its secret essence. For what this most beautiful formation of the 2017 season is concerned, I have come to realize that “conversion” wants to be the core concept of meaning.

Particularly characteristic for the formation are the pairs of sliced circles. They initially made me think of the separate parts of, for example, a bicycle chain. I do not want to take this association with these links too literally, but judge its symbolic significance. Because no chain but just some separate links seem depicted, I have thought of liberation from strong, possibly addictive, bonds. 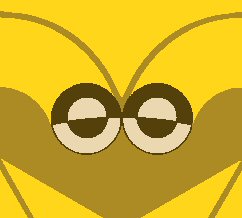 Since I have visited the formation on the physical level I can report to have had a lot of fun in walking the bows that mark the outside of the formation. These are the detours that connect the different links. This “walking around” provided me the idea of “switching”. 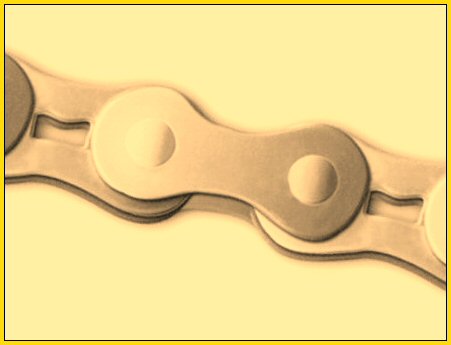 Link of a bicycle chain.

The idea is supported by the transitions that take place between the light and the dark areas of the shared circles. I even tend to think of “switches” as a logical sequel to the idea of “data points”.  In previous studies I discovered that a particular type of crop circle similar to a so-called “grapeshot” can represent the data point. The data point is a term from the information industry that represents each given signal of the person who is at the computer. It can be a mouse click or a single pressing of a keyboard button or the like. The depiction for it is derived from the typical multiple choice switches on your computer screen.

These typical selection switches are widely used in digital forms, questionnaires and the like. They are also called radio buttons. It may be clear why these can symbolize the data points.

Although the presentation of a data point is still quite different from the sliced circles shown, the binary thought does not release me. Later in this article I’ll tell you more about it.

From a very different order seems the Merkaba-like star in the middle. It is one of the many slick geometric figures that the crop circle phenomenon is rich of. There is much to do about the so-called “sacred geometry” as it is approached from the spiritual angle. In combination with the image characteristics referring to digital information technology, the star in this formation reminds me of quantum technology. Such technology is firmly thriving and encompasses a true revolution in the computer world and as a result in modern society as well. To explain the association with the star figure, I will first give a brief introduction about the quantum tendency.

In principle, quantum computing doesn’t work, such as the house, garden and kitchen computer, with “bits”, but with “qubits”. Qubits may differ in form according the use of atoms, photons, ions or electrons. The classic bit can be represented by a transistor switch set. It only has two possibilities; Something exists or does not exist. This is translated into either zero or one. The qubit, on the other hand, is a lot more complex, but it is possible to simplify and attribute three capacities; existent, non-existent and both existent and non-existent at the same time. The state that represents both existing and non-existent is called the super position. 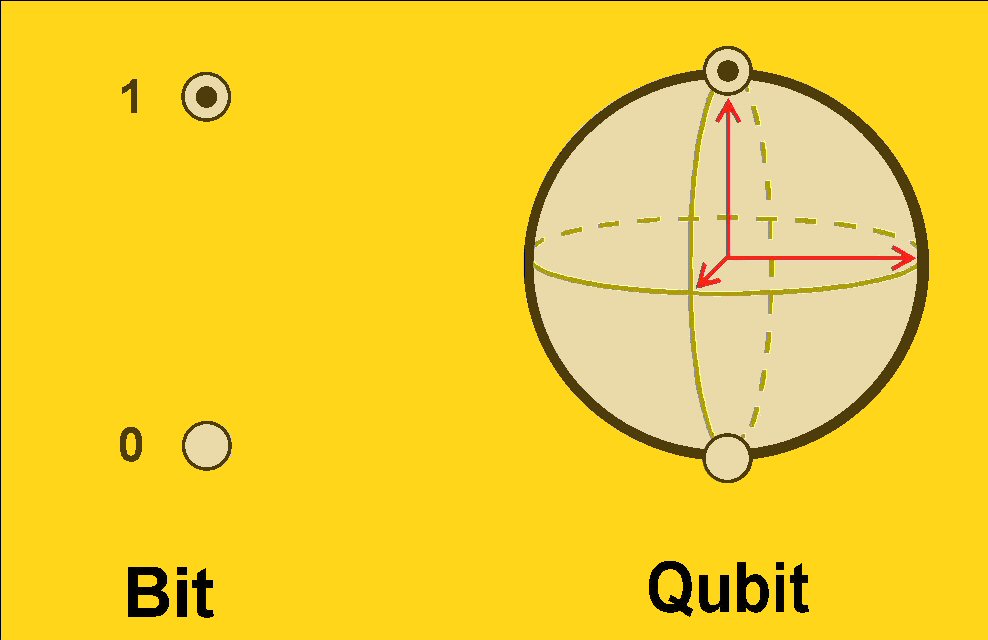 If one searches for a worthy visual expression of the qubit, then Google gives images of a sphere, roughly as illustrated above. It has the 1 as Arctic and the 0 as South Pole. We also see three axes, the Z-axis, the Y-axis and the X-axis. On the basis of these axes the measuring work takes place that occupies a prominent place in the quantum processes.

In particular, these axes suggest that the star in the middle of the crop formation indicates quantum measurements. Given the multiformity of the qubit (the sphere representation is only a simplification) this would be well possible.

A problem that occurs with the star is that it can’t be detected where the 1 and where the 0 is located. Also the super position becomes not clear. You could say that only the method of measurement itself has been brought to attention. 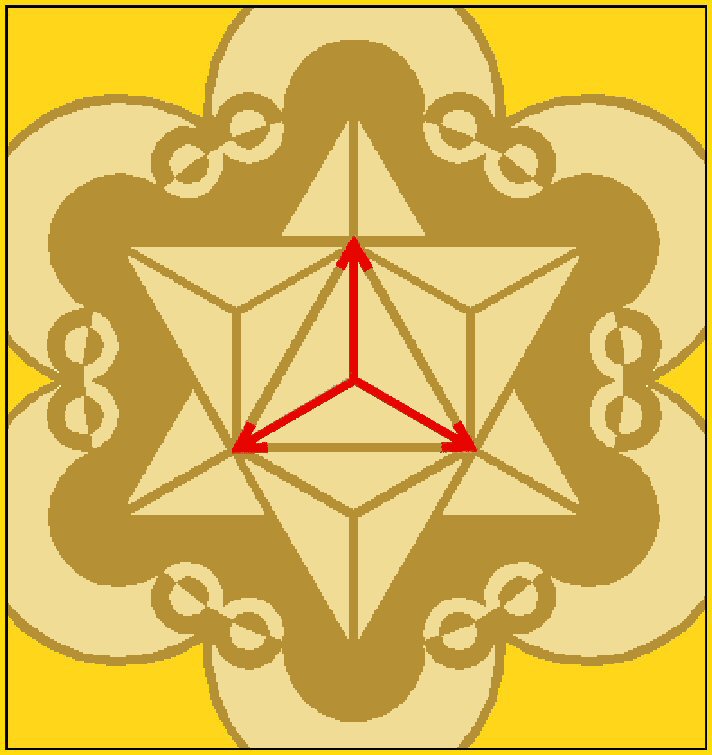 The tetrahedron that arises as soon as we connect the ends of the three axes can, in my opinion, be considered the most simplified form of a qubit. In that regard, the star that appears to have been built out of eight tetrahedrons would be consisting of eight qubits that are linked together. Besides the superposition, this linking of qubits is another typical feature of quantum computing. It is associated with “entanglement” which contains unique communication features; particles behave identically in the different qubits.

If we take the complete crop formation into consideration, it is as if a breakthrough is shown with the quantum essence in the middle and the traditional method around that removing from there or falling apart. After all, the star exhibits nothing but three folded shapes while the surrounding image elements only show two folded shapes. In this way, I can read the formation as a message saying that the quantum computer is experiencing a breakthrough, and a shift takes place from bit-computing to qubit-computing.

However, there is something that negates the thought of traditional bit circuits, which appear to be represented by the sliced circles. The case is that if we carefully examine the sliced data point or radio button again, we then have to conclude that it actually expresses the super position! Existing and non-existing at the same time are shown in the simplest way. The bit could have been compared with a coin of which one side represents “existing” and the other side “non-existing”, but here is a disc that shows how one can be a zero, the zero one, and that at the same time!

Somewhat hidden, but entirely in the spirit of conversion, is a circle that slices the data points. Something wonderful happens when we, inspired by the small links, switch the black and white distribution within the perimeter of this circle.

The resulting figure speaks volumes. The sliced circles now appear as traditional data points. The bows that connect the links with each other seem to have gained expressiveness. Now it is as if they only depict larger data points, which, however, are partly hidden behind the large central disk.

The big disc from its part may suggest a qubit again? 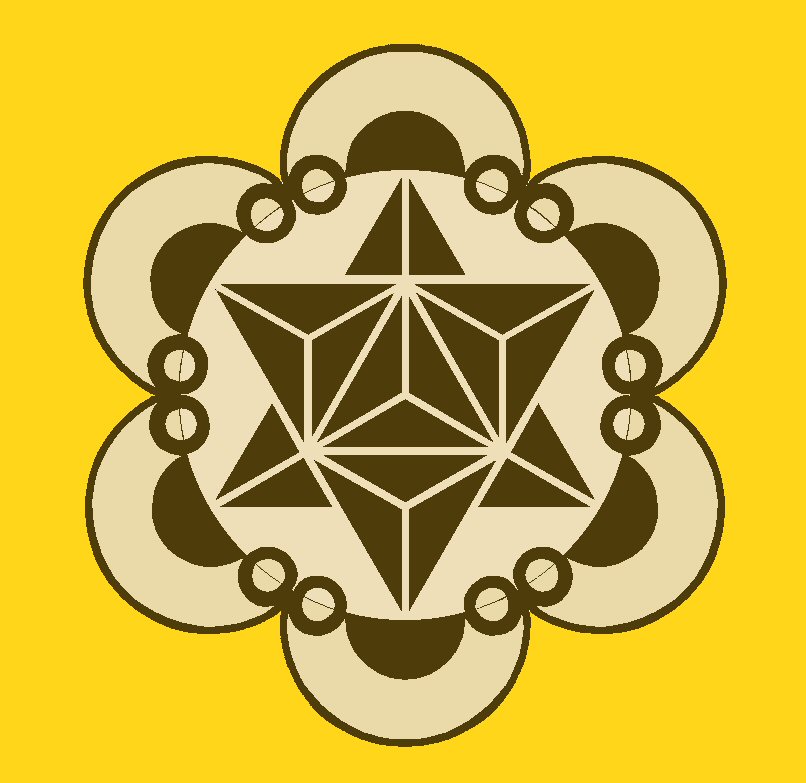 In my treatise on the star, the alert viewer will have noticed something that grinds. I have easily assumed that this star is built up with eight tetrahedrons. The strange thing about this is that the three tetrahedrons that seem to partial lie behind show a middle line where one would not expect that. One would think that these lines are only visible when the figure is reversed. 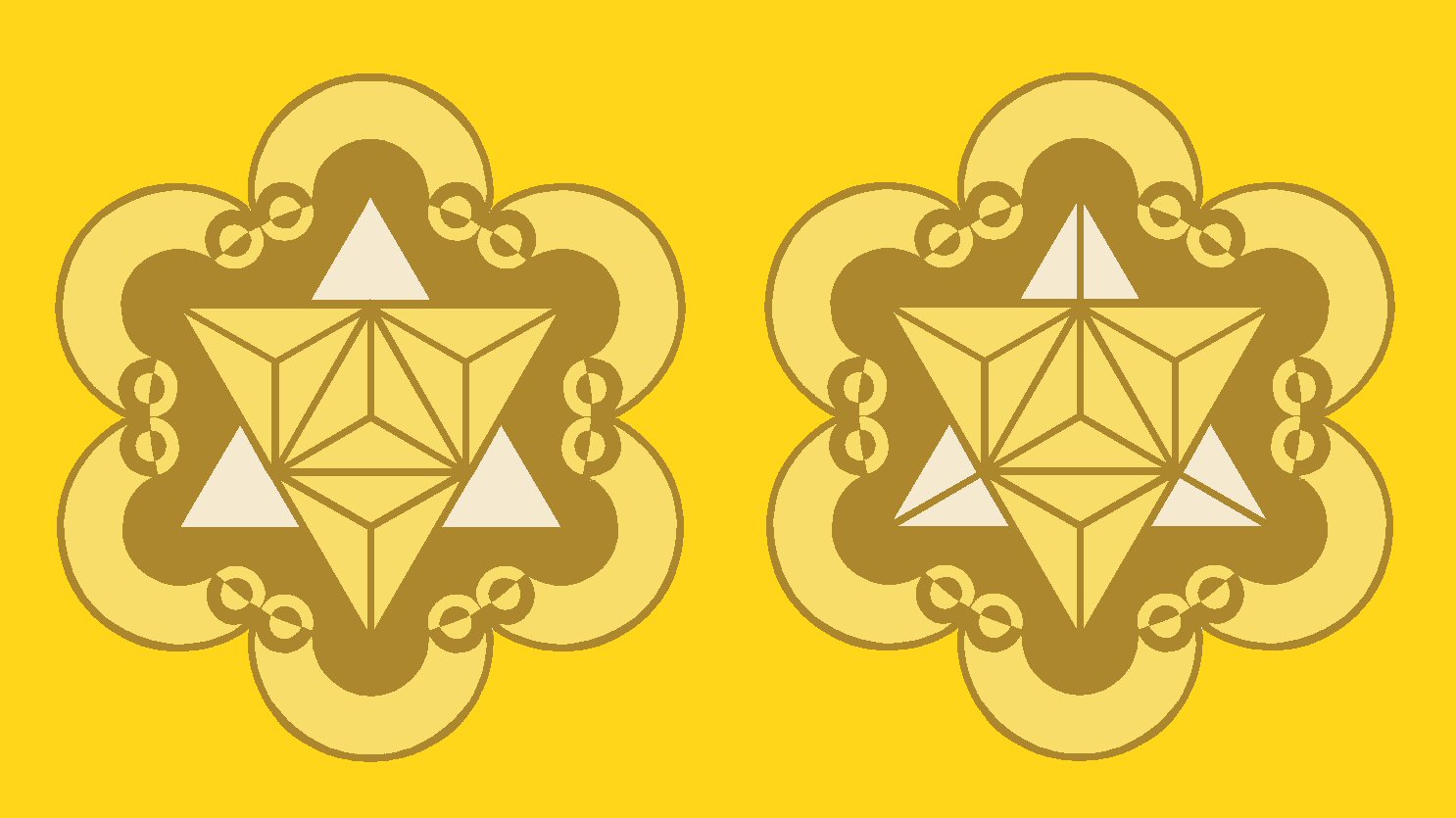 Left: The star without the middle lines of the partially underlying tetrahedrons. Right: The original view.

The best explanation I can think of for this anomaly is that they want to serve the formation of a (second) cube. Since countless crop formations have shown a sweet “squaring the circle” hobby, with the imagination of a qubit sphere one might as well expect a “cubing the ball” application. In any case, the three extra lines are certainly helpful in the visualization of the extra cube. 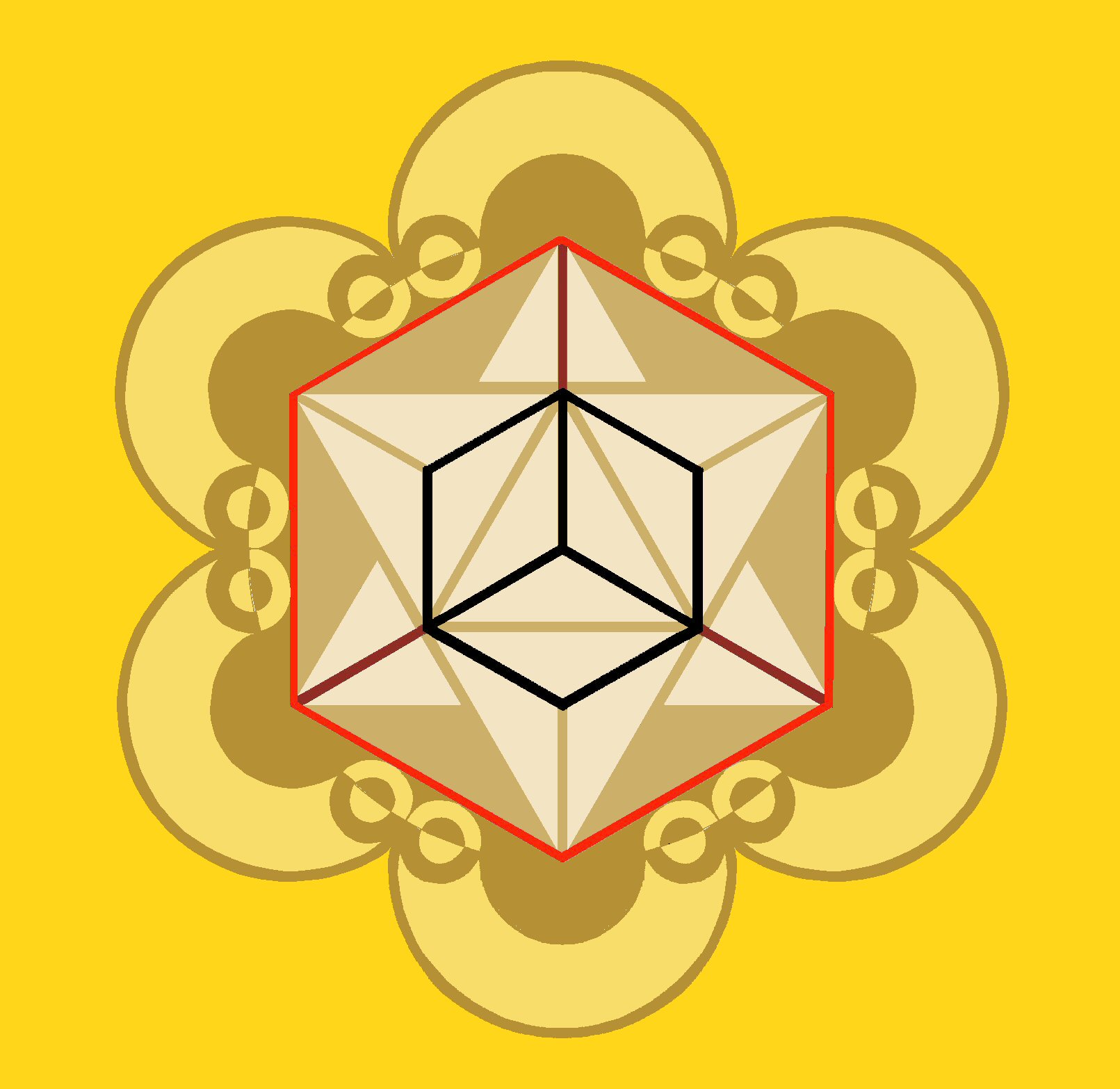 In black the existing cube, in red the new cube.

A formation that seems to have escaped from the same sleeve as the Cley Hill formation did is that of Olivers Castle 2008. I cannot escape the impression that for many years quantum mechanics or quantum reality has been a subject for the crop circle phenomenon to reflect on. If one browses through crop circle files it will easily become evident. 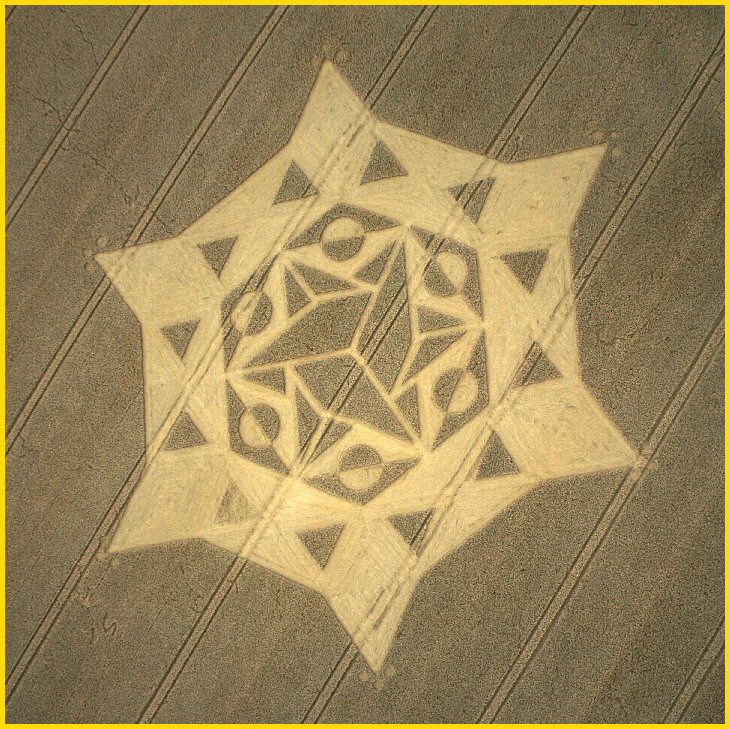