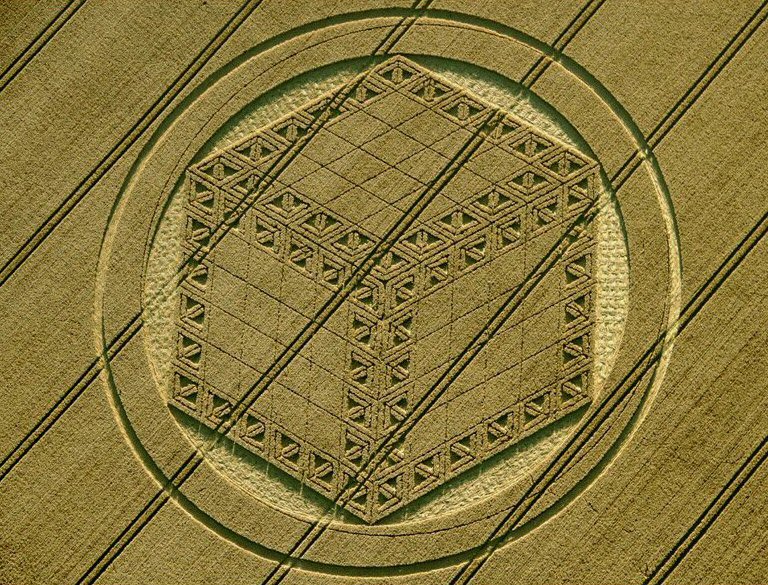 This very brilliant formation has amazed people because of its superior design and its quality of accomplishment. It clearly represents the “grand final” of the season of a special year considered also final in some sense due to Mayan prophecy. Further analysis shows us even bigger superiority than one sees at first sight, which is a property that we often come across regarding crop circles.

The cube
As particular characteristic to this formation one could point out “the cube”. In this setting I think it could symbolize “the system”. Later on I will explain why. In any case the impression of a cube is inevitable, even if later on it turns out to be an illusion.

Generally spoken a cube represents a state of perfection, the highest possible cultivation of “the ball”. It can be considered thé geometrical object among the geometrical objects, a construction of sense or a projection of evolutionary completion. The cube can also represent the universe or heaven.

The way in which the cube at the Hackpen formation is being presented, makes us clear that we can call it a construction, as it is build-up out of several little cubes. Some of these cubes are open in such a way that we can see their skeletal structure. This skeletal structure makes it look even more like a construction. We could also call them frames. It is funny to see how the cube as a whole embraces the idea of a skeleton or a framework. The term “framing” should, in my estimation, not get overlooked.

Rubic’s cube
This crop circle cube shows many simularities to the famous “Rubic’s cube”, because it is build-up by many small cubes. For a better understanding of particular ideas behind Hackpen’s formation, we can study Rubic’s invention. Think for example about “the balance between rolling (or turning) and blocking”. 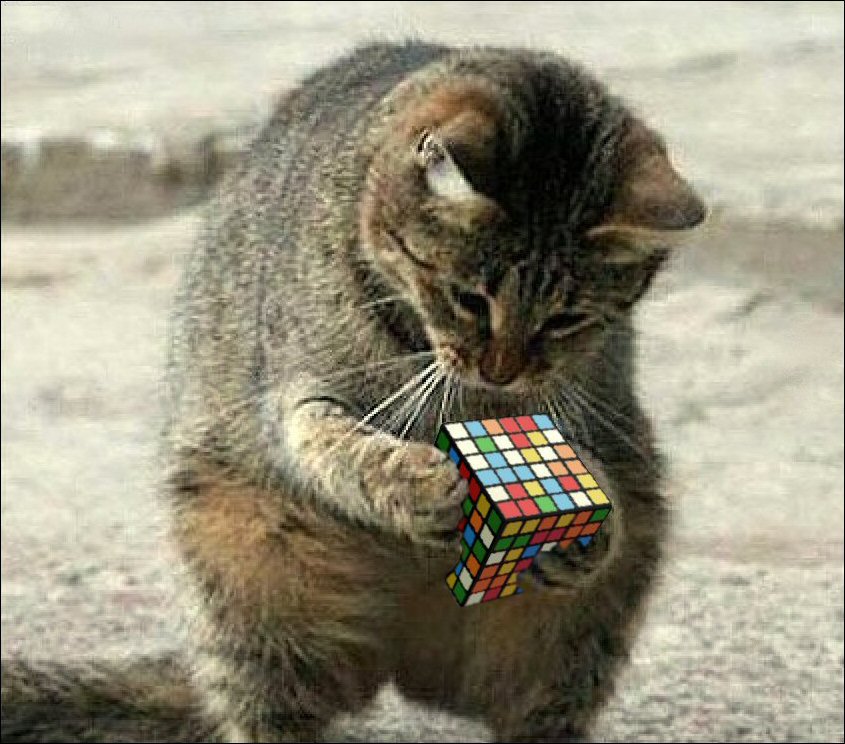 Spectacular crop circles that conclude a season often give me the feeling they hint with a specific theme to something about the time in which they appear or else, the near future. It’s like they’re marking a certain period in time releted to a specific theme that’s important for the world or for mankind.

Snowden’s revalations
It’s possible to understand the formation as being a precursor of Snowden’s revalations and of all what they’ve brought about and of what they’ll bring about. As a support for this view we can consider “Hackpen Hill” referring to “hacking”. The strong impression of a Rubic’s cube I associate with a special event in Hong Kong that happened on june 31st, 2013. At that day, Edward Snowden handed over a big amount of information about America’s national secret services, the NSA, to journalist Glenn Greenwald and moviemaker Laura Poitras. 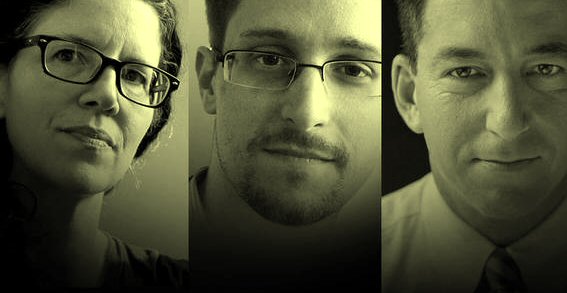 Greenwald and Poitras, as was communicated, recognised Snowden by a Rubic’s cube he held in his hand while entering the hotel’s lobby. This event can easily be considered as crucial in modern history. It shows how the action of one single person can be important for millions of people, for their rights on democracy, freedom of speech and privacy.

The link I make between Snowden’s revalations and the crop circle is not fully evident yet. We can see another meaningfull connection, but it needs a little introduction.

The system
With or without the association of a Rubic’s Cube, it’s important for interprating the crop circle to notice the structure seems to contain many little cubes. It seems as if we see several small cubes versus one all-embracing cube which can represent the sum of all the little cubes. We can easily project this information on, for example, the structure of society. In other words: “the system”.

Many individuals organised together form a massive totality that more or less mirror each individual. Religious people might aswell see an image of God in the big cube.

Here on earth we can speak about the organisation of mankind as “the system”. The system that demands parents register their newly born child. The system that imposes vaccines to babies and that obliges childeren fin an early stage to frequent school for learning things that mainly aren’t conform their natural tendencies. The system that prescribes us to work for almost all of our lives and which fills our spare time with indoctrinating distractions and suggestions so that we’ll never be able to stand in our original strenght. Despite of all this and much more, the system makes us believe that, we are free and that this structure is democratically organised.

History teaches us that the more humanity involves itself with technology, the more it is possible to speak of “the system”. An enormous dominance of the system has become possible by the invention of the computer. The little cubes in the crop circle design make us easily think about data storage, especially when we look closer and notice that it’s not about cubes but about tiles. Tile structures are typical for the storage of information and reproduction in computer technology. 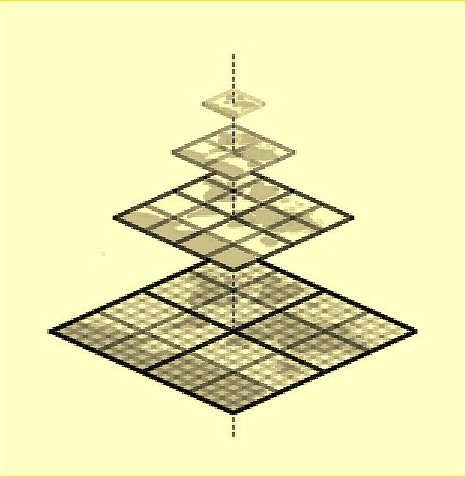 Large scale collecting of personal information from citizens by a select group of rulers makes it possible to form society according the desire of such a group. Reality has it that several of such groups secretly collect this kind of information.

Hopeless
When we talk about the so called democratic governments it becomes extremely suspicious that they mask their practices without justifying them to the citizins. The citizens are more and more being pushed or forced to give up their private lives. Ordinary people must offer transparancy about what they’re doing and thinking while the government explicitly withdraws itself from transparancy.

The comment often heard by the population “I have nothing to hide” is hopeless in the face of an incompetent or malicious government.  A person who would like to be deprived of property and/or self-determination would do well to cherish this position.

Snowden’s most important argument for his reveil is that in a healty democracy it must be the government who has to be transparant. The government should be accountable to the people. Not the other way around. Citizens have the right to self determination and a private life.

It is striking how the crop circle cube seems to express this fact. The outer edges consist of open cubes, while the inside is characterized by closedness. The system appears, in a constructed way, open and transparent to the outside (the outer edges), in the core it looks like a closed bastion. Yet both the cube and the ring around it suggest, remarkably, the possibility of reversal.

As far as the cube is concerned, the possibility of reversal has to do with the curious application of inverted open cubes along the central axes. The 13 inverted cubes (colored red in the diagram) make it possible to experience the interior of the cube. It’s like looking at an upstairs corner of a room. 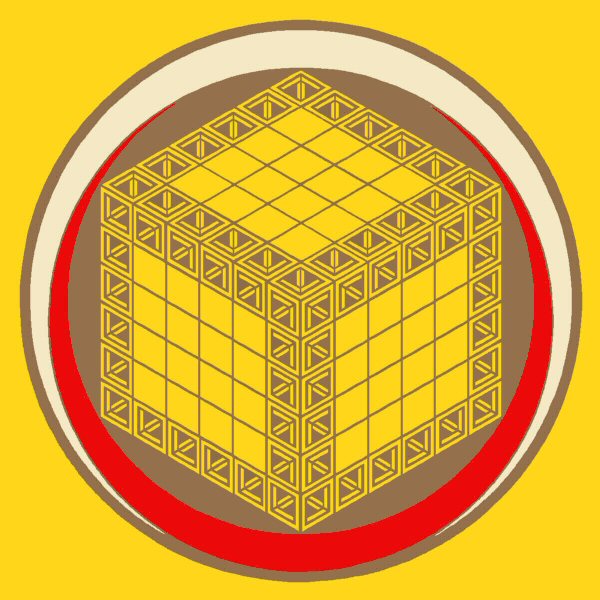 Inversed ring showing both sides at the same time.

The ring around the cube plays a similar game with inside or outside. This ring is divided into two crescents. One crescent (white in the diagram) shows the outside of the ring, while the other (red) shows the inside.

Looking up or looking down?
There are mainly two ways of looking at the cube. Either we look down on the cube from a distance, or we move, as it were, into the interior of the cube by looking up at the top corner (the middle) of it. Then, with regard to the social system, one can ask whether we are separate from the power structure, or whether we have attached ourselves to it and are therefore enthralled by it? 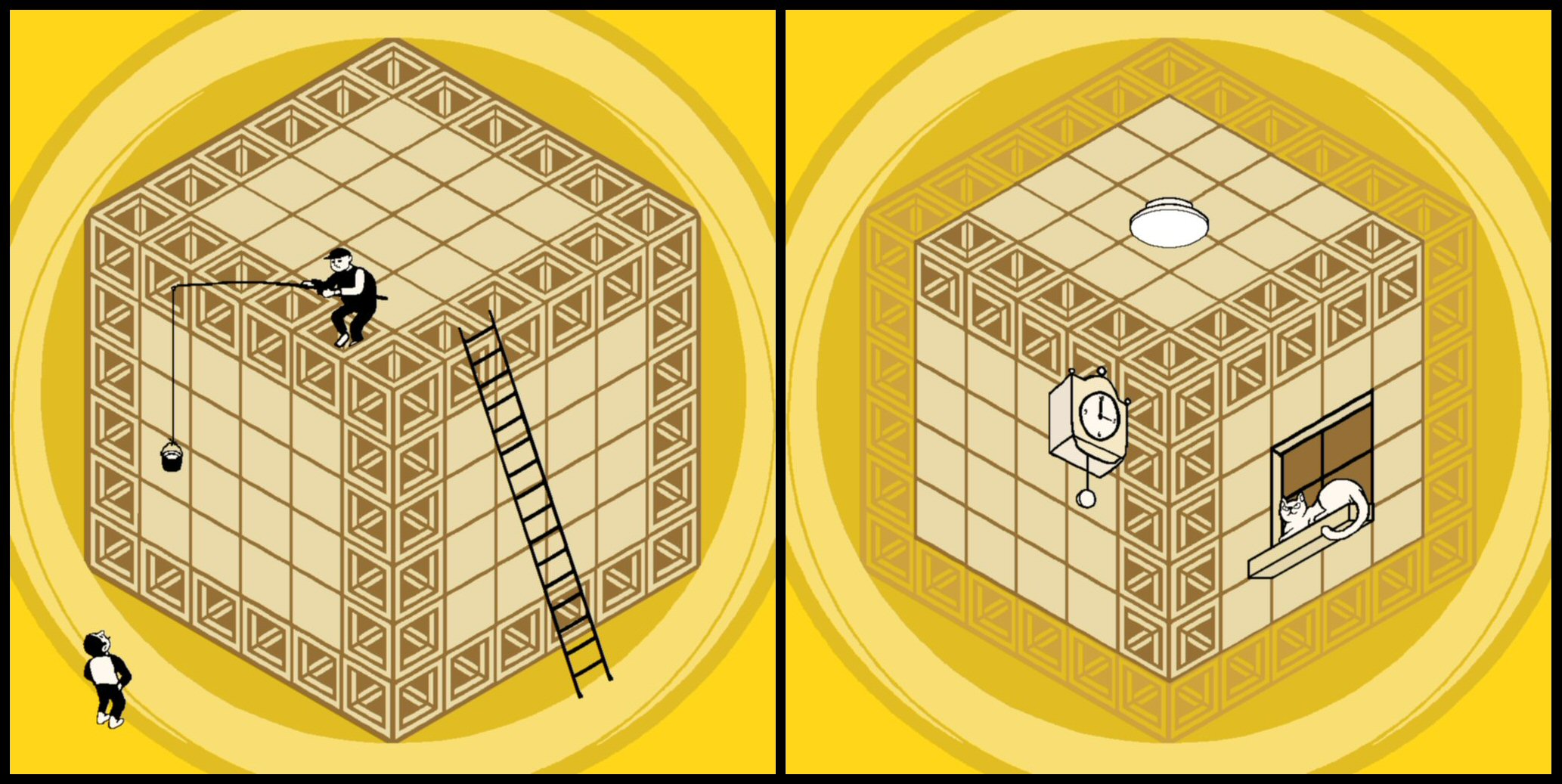 Here is the ability of each individual to relate to the system. Thus, the crop circle becomes a code or key to the development of inner strength! The system will take hold of us as long as we give it power. As long as we are in a position of dependence on it, those in power will continue to feed on our energy. It requires standing in our original power, following our authentic aptitude to overcome. In the latter case, the supervisory authorities are losing their grip on us. We are then powerful and the nefarious demagogues less and less this way.

Depending on where we stand in our personal development, it may not be easy to complete the reversal of the system as an inner task, but here lies the possibility of a way out of the world crisis as perceptible on a daily basis. 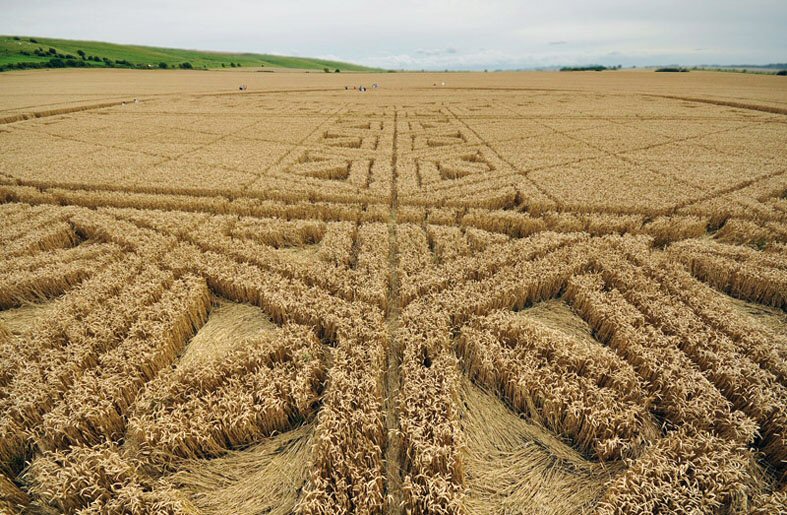